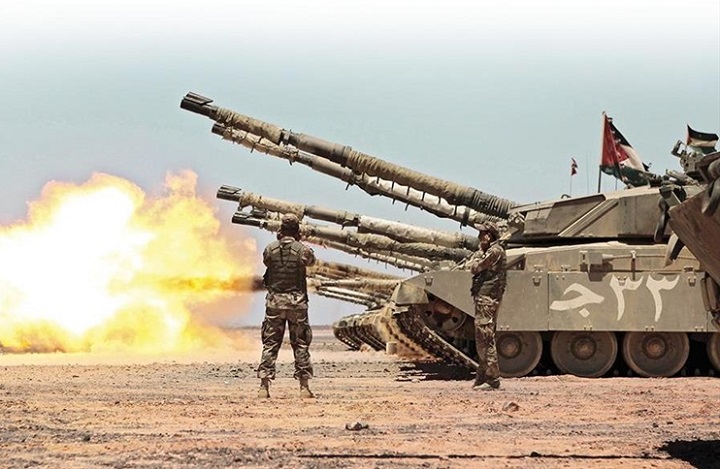 On Sunday, the US Central Command announced the launch of joint military exercises in Jordan, stressing Washington’s commitment to its partners in the Middle East to joint defense against various threats.

CENTCOM said in a statement that the exercises will last for two weeks from 4 to 15 September, noting that it is “one of the largest military exercises in the region.”

The Jordanian army also announced the launch of the Eager Lion 2022 maneuvers in the country with its American counterpart, with the participation of 27 countries, including nine Muslim countries.

About 1,700 US service members, 2,200 Jordanian armed forces, and 591 members of the military coalition made up of the participating countries will participate in the exercises, according to the statement. The Eager Lion exercise has been carried out on the territory of Jordan since 2011 in various training fields of the armed forces, and a number of schools and training centers.

Here is the regime in Jordan that continues to take America as a friend and partner state, which claims that it treats it as a strategic ally in light of its acquiescence to its economic, political, military and security dictates, a matter which the nation and the people of Jordan have repudiated, and they strongly reject America’s participation in the Jordanian armed forces on the land of Jordan, which are supposed to be the forces of Jordan to defend the country and the people from the real enemies. It is not a secret to anyone, and opinion polls do not need to confirm that the usurping entity of the Jews of Al-Aqsa, Al-Quds and Palestine, and behind it America and the West, are the number one enemy for Muslims in general and for the people of Jordan in particular. The Almighty said:

“They are the enemy, so beware of them. May Allah condemn them! How can they be deluded ˹from the truth˺?” [TMQ Al-Munafiqun:4].

The American-Jordanian joint defense treaty that the regime presented to America and opened Jordan wide for the American forces to violate its sanctities and sovereignty and spy on every small and big thing in it, is rejected by all the people of Jordan, and America is not satisfied with this treaty, so the largest maneuvers that allow its various military sectors continue and over the years of the past decade of training And identify the weaknesses and strengths of the country, to use it in what it plans for in the future or in what it fears, which is to confront the Ummah in its war against Islam and plunder the wealth of Muslim countries, as it knows that the regimes that submit to it in Muslim countries will disappear sooner rather than later, so that its battle will be with the Ummah.

“Eager Lion is a multifaceted event that demonstrates our commitment to partnerships and responsive joint forces operating in complex environments that offer no easy victories or quick wins,” said Maj. Gen. Steven J. deMilliano, Director of Exercises and Training Directorate, United States Central Command U.S. military relationship with the Jordanian Armed Forces, one of the strongest and most reliable partners of U.S. Central Command in the region. “More broadly, partnerships enable militaries to grow capabilities and quickly respond to demanding crisis situations.”

And America, in its political strategy, is to ward off the dangers that threaten any competition with it as the first country in the world. It occupies the countries of the world in regional wars such as the Ukraine war and provoking China, and it ally itself with the forces that revolve in the orbit of its interests, but in Muslim countries it harnesses the capabilities and armies of Muslims for any future circumstances that call for engagement and confrontation to achieve its interests, so that the sons of Muslims would be its spearhead. After its defeat and loss of lives and equipment in Afghanistan and Iraq, and specifically in its war against Islam and the project of the nation’s renaissance with the return of the Khilafah Rashidah (rightly-guided Caliphate) State, which constitutes the only threat globally to remove it and put an end to its brutality and arrogance on the peoples of the world, and for this it does not seek at all to solve global problems, including the so-called two-state solution to resolve the issue of Palestine, whose illusions the regime and settlement building are clinging to in full swing, as much as it seeks to seize the threads of international control that maintain its hegemony over the world, as long as it remains away from its direct threat.

It is not permissible, according to Islamic law, or by any standards for the good of a Ummah brought out for people, for the Kafir colonial America to tamper with our security and mock our sons and our armies; Muslim armies are in the service of their colonial interests, and they are the enemy that has been killing and destroying Muslims in all Muslim countries. These armies are for the defense of Muslims and the protection of their countries and are not destined to serve their enemies and protect the agent regimes, instead of being preoccupied with preparing to fight in the cause of Allah and liberating their sanctities and expelling the Kafir colonizer from it in all its forms and shapes. Allah (swt) says:

“Prepare against them what you ˹believers˺ can of ˹military˺ power and cavalry to deter Allah’s enemies and your enemies” [TMQ Al-Anfal:60].

The legitimate duty requires that Muslim armies refrain from participating with the colonial and enemy forces of America, Britain, France and the enemy in the training of the Eager Lion, and unite to be the nucleus of the forces of the Khilafah Rashidah State that restores the Islamic Ummah’s pride and dignity, liberates the occupier from its country, and restores justice and mercy to all peoples of the world and not only to Muslims.

“O believers! Do not take My enemies and yours as trusted allies, showing them affection even though they deny what has come to you of the truth.” [TMQ Al-Mumtahana:1].