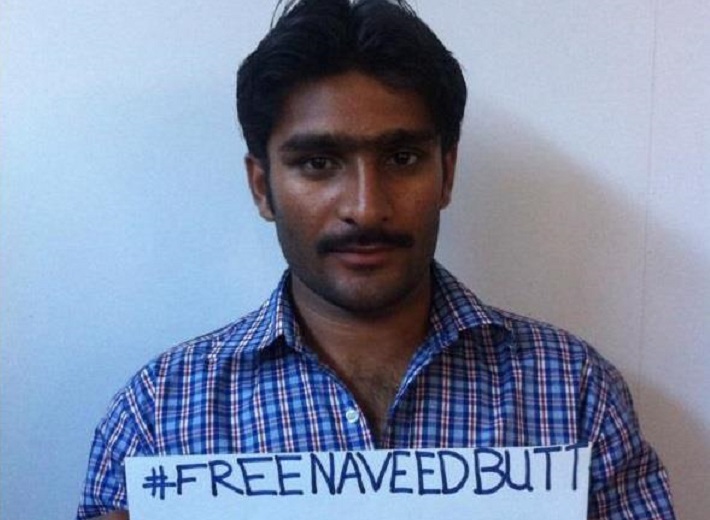 Naveed Butt is well known to us all as the honest guide, advocate of the Khilafah (Caliphate) on the Method of Prophethood (saw) and official spokesman of Hizb ut Tahrir in the Wilayah Pakistan. Our noble brother Naveed was seized on 11th May 2012 by thugs of the rulers at the time, the Kayani-Zardari regime. This 11th May 2021, it will have been a complete nine years of oppression on a believer whose only crime is to say that his Lord is Allah (swt) alone. In this blessed month of Ramadan, with its abundant rewards for the righteous, we call upon you to raise his case and demand his release, so that a tenth year of oppression does not pass. We call upon you to assist Naveed in his hardship and in the hardship of his family, whilst reminding you of the speech of the Messenger of Allah (saw), who said,

O People of Power and Influence of Pakistan from the Ulema, the Journalists, the Lawyers or the Business Community amongst Others! Our strength, influence, status and privilege are nothing but a favor of Allah (swt) that can be taken from us at any time. Indeed, our strength, influence, status and privilege are a trust about which we will be held to account by Allah (swt). As our lives draw to their inevitable ends, it is high time that we invested our strength and influence in the best place, in the service of Allah (swt) and for the dominance of His Deen. We will invest our capabilities at a time that the Islamic Ummah has awoken to its purpose in this Dunyah, the complete worship of Allah (swt), through the implementation of Islam as a way of life, authority and state. Indeed, the call for the Khilafah is now a dominant demand for an Islamic Ummah, that despairs of the current rulers, who have brought nothing but misery and humiliation through their misguidance and sin. Truly, without a guiding leadership, the Islamic Ummah is like an abandoned orphan, without a responsible or a guardian, as its lands are occupied, its wealth looted and the honor of the Messenger (saw) is repeatedly attacked without an appropriate response.

O Sons of Umar al-Farooq (ra) and Hamza (ra), the Chief of Martyrs! Indeed, the congregation is assembled and is in need of an Imam to lead it. It is we, the people of power and influence that must perform our duty and lead the Muslims towards the real change, fearing none but Allah (swt). Our brother Naveed did just that and is a reminder to us all, that Allah (swt) will not send His Nasr (Victory) without our sacrifice and our constancy upon truth. Thus, it is upon us all to speak on his behalf, demanding his release and stand in his stead to demand the re-establishment of the Khilafah (Caliphate) on the Method of Prophethood (saw). Allah (swt) said,

“Allah has indeed purchased from the believers their lives and wealth in exchange for Paradise.” [Surah at-Tawbah 9:111].