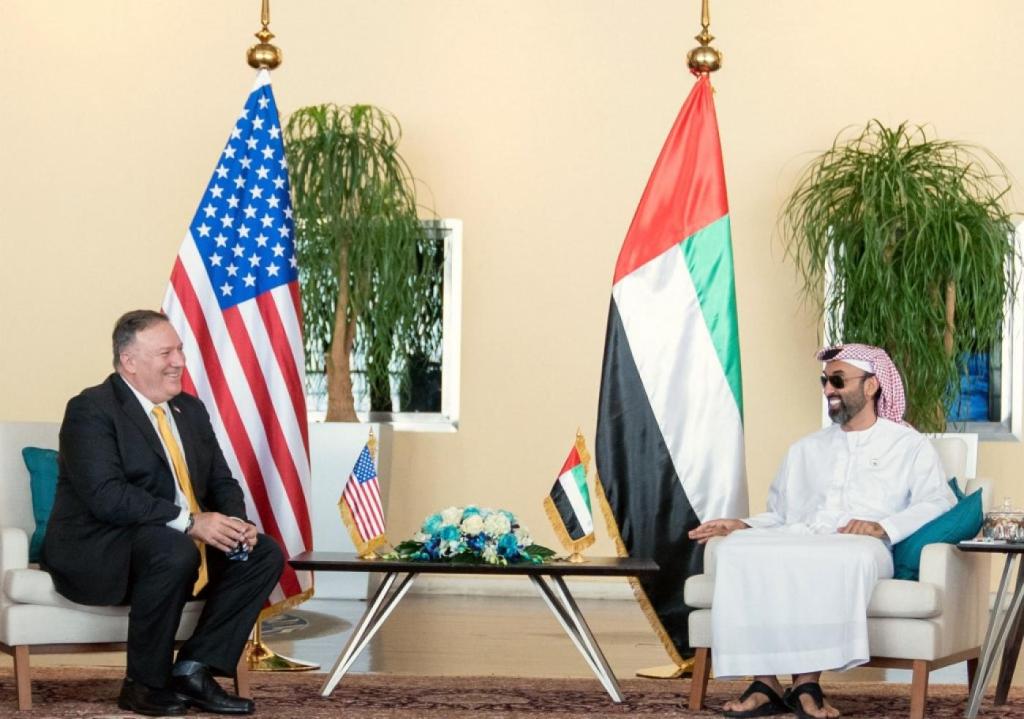 According to Arabi 21 the US Secretary of State Mike Pompeo arrived, on Monday (24/08/20) morning, at Ben Gurion Airport near Tel Aviv, starting a tour that includes Arab nations. The five-day visit comes as part of America’s efforts to persuade Arab nations to normalize the occupation, in the footsteps of the UAE. Pompeo is expected to discuss the Iranian file, economic exchange and deepening relations between the Jewish entity and Middle Eastern states. Since the agreement with the UAE, there has been much speculation about other states normalizing relations with the entity, including Bahrain, the Sultanate of Oman and Sudan. After Tel Aviv, Pompeo will travel to Khartoum to discuss ‘Israeli’-Sudanese relations. Pompeo then moves to Bahrain and the Emirates, according to his spokesman.

After Arab and non-Arab rulers reduced the issue of Palestine from being the Ummah’s issue to an Arab issue, and then to a Palestinian issue that concerns the people of Palestine alone. The issue was then placed into the hands of the Palestinian Liberation Organization (PLO) which was tasked with shooting the bullet of revenge at the cause of the Blessed Land of Palestine. Then the issue was reduced to a matter of conflict between the Jewish entity and the Oslo Authority, Palestinian Authority, as a dispute over less than 20% of the Blessed Land upon which the Oslo Authority claims to establish a Palestinian state. After the issue of Palestine was reduced through all these conspiratorial steps, it has now been reduced to an electoral winning card at the table of the head of Kufr, America. The visit of Trump’s Secretary of State, Pompeo, comes in the context of Trump seeking a second term, using an electoral winning card that grants him an advantage over his opponent in the upcoming US presidential elections in November.

It has become superfluous to speak of the consensus of the Muslim rulers regarding the recognition of the Jewish entity. The consensus occurred after when the entry for the “liberation of Palestine” was removed from the dictionary of these Ruwaibidha rulers, since the first day of its occupation. There have been no differences amongst them over the recognition of and normalization with Jewish entity. However, since there has been a general rejection within the Ummah, it was necessary for these rulers to tame the people, introducing normalization gradually, so as to introduce this cancerous entity as a natural entity in the pure body of the Ummah. Whoever thinks that he could tame and coerce the people whom he governs, lines up in the first rank of those who make normalization with the Jewish entity. Nevertheless, what is certain is that they are all waiting for their turn to normalize. As soon as the first one comes to normalization, the others are to follow suit. It depends on the success of these Ruwaibidha rulers in marketing their treachery to the Ummah on the one hand, whilst on the other hand, Trump wants to exploit and use these treacheries for his favor domestically, as an electoral card, and regionally, as an American colonial plan in the Islamic lands, which includes the empowerment of her stepdaughter, Jewish entity, to enter Muslim Lands in order to corrupt them and destroy their capabilities.

The Muslim rulers and their Western masters do not live amongst the Ummah and so they do not sense the suffering of the Ummah. Hence, their plans and policies towards the Ummah and her issues are based on assumptions or estimations. They draw up their political projects assuming that either the Ummah has died or has apostatized from its Deen. So they see nothing wrong in retreat and normalization. However, the reality is completely opposite to that as the Islamic Aqeedah is deeply rooted in the hearts of Muslims and the Blessed Land of Palestine is part of their Aqeedah. Just as the regimes who previously normalized with the Jewish entity, Egypt, Jordan and the Oslo Authority, have failed, failing to normalize the people, the rest of the regimes will also fail.