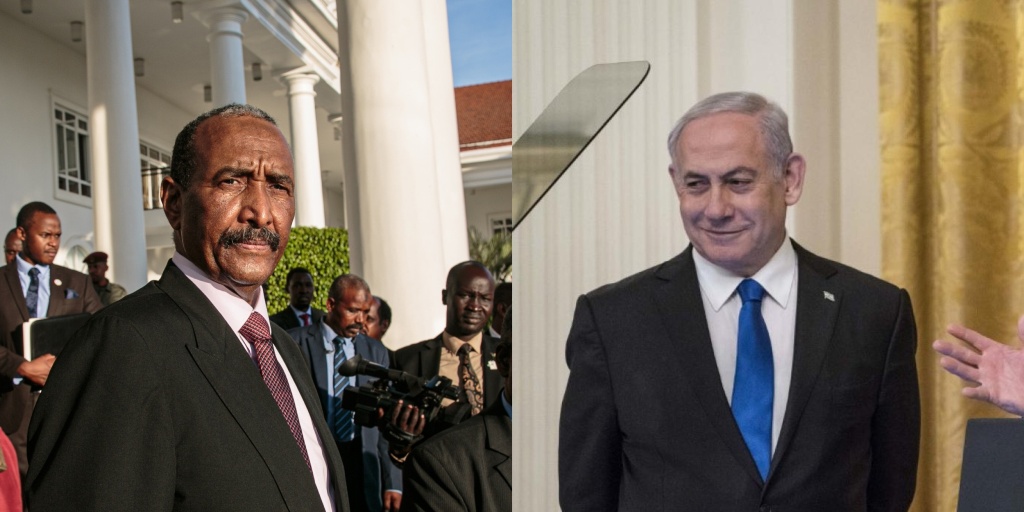 With direct instructions from the US Secretary of State (Mike Pompeo), in a telephone call on Sunday 02/02/2020, the head of the Transitional Sovereignty Council, Lieutenant General Abdel Fattah Al-Burhan, travelled humiliated, dressed in disgrace, to the Ugandan city of Entebbe, to meet on Monday 03/02/2020, Prime Minister Netanyahu of the Jewish entity, whose hands are dripping the blood of infants, widows and elders !! The Prime Minister’s Office of the Jewish entity affirmed in a brief message, that Netanyahu and Al-Burhan discussed ways of joint cooperation that would lead to normalization of relations between the two parties!! A statement issued by Netanyahu’s office also mentioned that the US Secretary of State coordinated his meeting with Al-Burhan (Arabic The Independent Newspaper). According to Al-Saiha Newspaper published on 04/02/2020, a government source considered that the arrangement for the meeting was one of the important agendas that were addressed by the phone call between Al-Burhan and US Secretary of State Mike Pompeo yesterday!!

We in Hizb ut Tahrir Wilayah of Sudan, we explain to our Ummah the following:

– The Sykes-Picot national states, which were made by the colonial Kafir, in Muslim countries; are functional mini-states serving the projects of the Kafir West; keeping the Ummah away from its Aqeedah (creed), tearing it apart, plundering its wealth, making peace with its enemies (a Jewish entity), and killing its people, as in the incident of the dispersal of the sit-in, and even killing the Arab Spring revolutionaries, starting from Tunisia, through Egypt, Syria, Libya, and others.

– The rulers in Muslim countries; the guards of the great prison, are agents of the West and its tools, they follow its orders, and implement its agenda, they do not care about their parish any pact of kinship or covenant of protection, they compete to please their masters in the West. So, at a time when the government of the forces of transitional freedom and change is busy deflating the laws from some of Shariah rulings that have been hypocritically introduced into the system of Western legislations, which have inherited weakness and degradation since the alleged independence, at this time Al-Burhan rushes to meet the butcher Netanyahu, striking the rules of Islam, and the feelings of Muslims against the wall, and the so-called gathering of professionals bless this heinous and dreadful crime (Al-Horra channel)!!

– Palestine is an Islamic land, opened by the Khilafah Rashidah (righteous Caliphate), and usurped by the Jewish entity, after the demolition of the Khilafah, in which they established an entity on the skulls and blood of Muslims, with the complicity of Muslim rulers; the agents of the Kafir West, who implement Trump’s instructions, and seek to move from merely protecting a Jewish entity, to the normalization of relations With it, under the sign (Betrayal of the Times), some of them do it under the table, and the chanting ones like Al-Burhan, they do it openly, evil is that which they do!

– The rulers endeavour to satisfy America, arousing desire in the simple people that removal of Sudan from the list of terrorism addresses all the country’s problems, is only misleading and ignorance, for livelihood is sought through satisfying the Provider, the firm possessor of strength. And drawing strength and pride is only from the All-Strong, the Exalted in Might, and Al-Haqq the Almighty said the Truth: يَعِدُهُمْ وَيُمَنِّيهِمْ وَمَا يَعِدُهُمُ الشَّيْطَانُ إِلَّا غُرُوراً “Satan promises them and arouses desire in them. But Satan does not promise them except delusion.” [An-Nisa: 120]

O People of Sudan: Al-Burhan and his government are continuing to trample on the rulings of Islam, the sanctities of Muslims, and their feelings, moving from one betrayal to another, mimicking the crimes of the defunct regime, which separated South Sudan, to please the Americans, and your silence on the betrayal of these rulers and their crimes, is what has tempted your enemy on you, such  that morning comes upon us with on one betrayal, and evening comes upon us with an another one even uglier! So, take at the hands of the traitorous rulers to prevent them from liquidating the issue of Muslims in Palestine, the Almighty says: يَا أَيُّهَا الَّذِينَ آمَنُوا لَا تَخُونُوا اللَّهَ وَالرَّسُولَ وَتَخُونُوا أَمَانَاتِكُمْ وَأَنْتُمْ تَعْلَمُونَ “O you who believe! Betray not Allah and His messenger, nor knowingly betray your trusts” [Al-ِAnfal: 27].

O Muslims worshipping Allah, those who are engaged in obedience to the Messenger of Allah ﷺ, those who have ablution on their hands, prostrate foreheads, and those who aspire to Allah Almighty’s Gardens of Bliss, the time has come for earnestness, so reveal from within you good deeds, and work with the workers to bring it back, Khilafah Rashidah on the method of Prophethood, that applies Islam, and uproots the colonial Kafir from Muslim countries and all their systems, and mobilizes armies to liberate Palestine, and other usurped Muslims lands, so that you return to be the best nation ever to be raised for mankind, carrying the good to the worlds, and brings people out from darkness to light, so that hardly no sun of a new day rises except its facts state that this alone is way. For such, let the workers work.

“Indeed, in this [Qur’an] is notification for a worshipping people”. ]Al-Anbiya: 106[