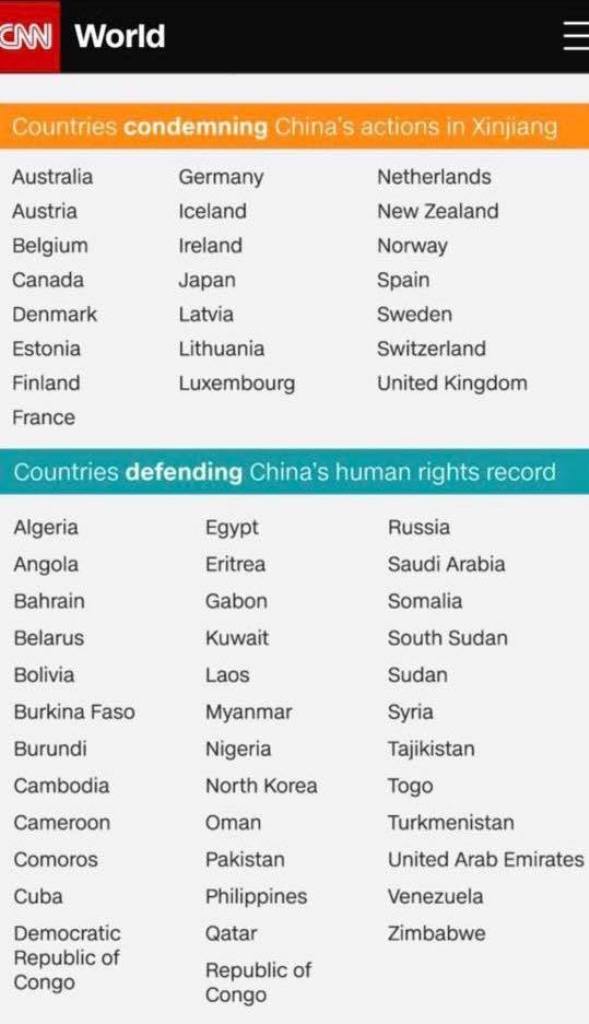 The newspaper “Kommersant” in its issue number 122 dated July 15 reported: “37 countries, including Russia, Belarus and Tajikistan, signed on Friday evening at the close of the 41st session of the UN Human Rights Council a Chinese statement in support of the policy of the People’s Republic of China in the Xinjiang Uygur Autonomous Region.

“Representatives of nearly 40 delegations sent you and the UN High Commissioner for Human Rights a letter expressing appreciation for the progress China has made in the field of human rights in XUAR,” Chen said to the session chairman. – “They expressed their support for the Chinese position on Xinjiang . Over the past three years there has not been a single terrorist attack, and this is proof of the correct course of the Chinese authorities to fight terrorism.””.

The dictatorial regimes that rule over Muslims today in our lands are far from Islam and Muslims. Much to our regret and sorrow, Muslims, deceived by false fatwas about submitting to their ruler, silently watch the crimes of their rulers. Yes, submission to the Muslim ruler is mandatory, and the proof is the Shariah texts. Almighty Allah said in His Noble Book:يَا أَيُّهَا الَّذِينَ آمَنُواْ أَطِيعُواْ اللّهَ وَأَطِيعُواْ الرَّسُولَ وَأُوْلِي الأَمْرِ مِنكُمْ  “O you who have believed, obey Allah and obey the Messenger and those in authority among you” [4:59].

These and other Shariah texts indicate obedience to the ruler. But these common texts are due to private ones, which state that the ruler should be legally elected according to Shariah law, the Bayat method, and not a usurper. To rule under the laws of Allah, the orders and actions of the ruler must comply with the orders and prohibitions of Allah. The Prophet ﷺ orders to fight the usurper.

Such is the hukm of a person who illegally seizes anything. This hukm also extends to a man who seizes power by violence without the consent of the Ummah. Anyone who seizes power by force is a usurper ruler, and he must be fought until the power returns to the Ummah. In one of the hadith the Messenger of Allah ﷺ said: «لَا طَاعَةَ لِمَخْلُوقٍ فِي مَعْصِيَةِ الْخَالِقِ» “There is no obedience to the creation wherein there is disobedience of the Creator” (Imam Ahmad). The rulers over the Muslims in our countries today do not rule under the laws of Allah. Moreover, they are at enmity with Islam and Muslims. Allah Almighty says in His Noble Book:فَاصْبِرْ لِحُكْمِ رَبِّكَ وَلَا تُطِعْ مِنْهُمْ آثِمًا أَوْ كَفُورًا “So be patient for the decision of your Lord and do not obey from among them a sinner or ungrateful [disbeliever]” [76:24].

Turkish President Recep Tayyip Erdogan during his visit to China said that the Xinjiang people live happily in a prosperous country. The hereditary prince of Saudi Arabia, Mohammed ibn Salman Al Saud, during his visit to Beijing supported China’s right to fight extremism, that is, against Xinjiang Muslims. Human rights organizations talk about the existence in China, in the seized Muslim land in the Xinjiang Uygur Autonomous Region, the so-called “re-education camps” in which forcibly held, from 1 million to 3 million people, not only the Uighurs, but also Kazakhs, Kirghiz and other Muslims.

Hizb ut Tahrir conducts ideological and political work according to the method of the Prophethood for the revival of the Second Righteous State of the Khilafah (Caliphate). Hurry up to join Hizb ut Tahrir. Hurry to the revival of the Islamic way of life led by the righteous ruler, Imam. The Prophet ﷺ said: «إِنَّمَا الإِمَامُ جُنَّةٌ يُقَاتَلُ مِنْ وَرَائِهِ وَيُتَّقَى بِهِ» “The Imam is a shield, behind whom you fight and protect yourself”.