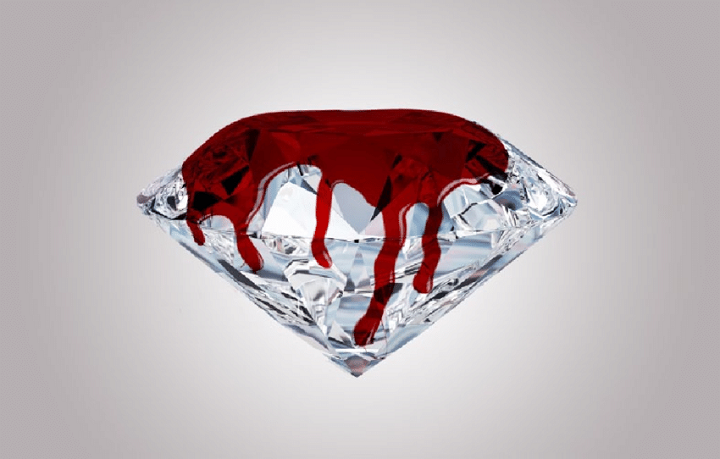 The Kimberley Process is an inter-governmental initiative, which started when Southern African diamond-producing states met in Kimberley, South Africa. The multi-stakeholder meeting between governments, the industry and NGOs aimed to discuss ways to stop the trade in ‘conflict diamonds’ and ensure that diamond purchases were not financing violence by rebel movements and their allies who were seeking to undermine ‘legitimate’ governments.

The discussions led to the establishment of a multilateral trade regime in 2003 with the goal of preventing the flow of conflict diamonds. The core of this regime is the Kimberley Process Certification Scheme (KPCS) under which States implement safeguards on shipments of rough diamonds and certify them as “conflict free”. It established a system of diamond “passports” issued from the country of origin, which would accompany every shipment of rough diamonds around the world. Countries that could not prove that their diamonds were conflict-free could be suspended from the international diamond trade.

The UN backed the process and lent it legitimacy through two resolutions. And the scheme was ratified by governments and international advocacy groups in the subsequent years. It now represents seventy-five countries and claims to cover 99% of the global rough-diamond industry. And has been hailed as a major step toward ending diamond-­fueled conflict.

But of course, things weren’t that simple.

The action they would take was automatically limited due to the fact that it only defined conflict diamonds as gemstones which were sold to fund a rebel movement attempting to overthrow the state. So when, in 2008, the Zimbabwean army seized a major diamond deposit in eastern Zimbabwe, and massacred more than 200 miners, it was not considered a breach of the Kimberley Process protocols.

“The huge Marange diamond fields of eastern Zimbabwe are operated by military-run syndicates who beat or kill miners who don’t mine for them or pay bribes. The extreme violence perpetrated by the military even included the mass murder of hundreds of miners by helicopter gunships” (CNN)

The Kimberly Process has been wholly ineffective at stopping the trade of Blood Diamonds.

While the diamond industry emphasizes the small percentage of conflict diamonds that are being traded, they ignore the impact that this percentage has- and how it directly threatens the success of the Process.

“The rough diamond trade grosses $10 billion annually; one percent of this total is $100 million dollars, which can go a long way in Africa where an AK-47 can be bought for as little as $10. The breakdown of law and order amid the chaos of war provides excellent cover for engaging in a profitable rough diamond trade — buying low, selling high, and reaping windfall profits.” (CSIS)

What’s clear, with a bit of research, is that the Kimberly Process is ridden with loopholes and has been unable to stop the international sale of the majority of diamonds mined in conflict ridden zones.

“A recent United States Government Accountability Office (GAO) report shows that blood diamonds may be entering the US because of major weaknesses in the implementation of the Clean Diamond Trade Act, the US law which implements the Kimberley Process Scheme.” (Global Witness)

The United Nations reported in October 2006 that poor controls are allowing up to $23 million in conflict diamonds from Côte d’Ivoire to enter the legitimate trade through Ghana, where they are being certified as conflict-free, and through Mali, which is not a part of the Kimberley Process system. (CSIS) In Sierra Leone, Kimberley Process experts assess the illicit trade to be between 15 and 20%. (Global Witness)

Where the Kimberley Process has implemented a ban, such as in the Central African Republic (CAR), conflict­ diamonds are still leaking out.A U.N. panel of experts estimates that 140,000 carats of ­diamonds—with a retail value of $24 ­million—have been smuggled out of the country since it was suspended in May 2013 (Time) Many of those diamonds are likely being smuggled across the border to Congo, where they are given Kimberley Process certificates before being traded internationally.

“The fact that CAR diamonds are making it to international markets is a clear demonstration that the Kimberley Process on its own is not going to be able to deal with this kind of problem.” Michael Gibb of Global Witness

Despite all of this, there hasn’t been any change.

“Many illicit traders are known, but the industry is still largely secretive and unwilling to tackle the problem by working more proactively with law enforcement agencies. The diamond industry has failed to honour its commitments to support the Kimberley Process by not policing itself effectively while governments have failed to step up to the line and hold the industry accountable for this.” (Global Witness)

The argument that they use to justify this failure is that it’s a result of an inability to change/expand the Kimberly Process – that kind of action requires a consensus. And countries resist expanding the parameters as it could threaten their national interests.

But while looking at all of these facts and statistics, it’s important to remember two things:

1. The UN and its member states have a habit of hiding behind technicalities and loopholes when it suits their interests.

2. The Kimberly Process didn’t come about because of the political instability that it caused in Africa – they wanted to address the threat of a consumer boycott over the sale of rough, uncut diamonds to fund the brutal civil wars of Angola and Sierra Leone.

As a result, there is a belief that the Kimberley Process amounted to little more than a public relations stunt for the diamond industry. And in the end, all of this shouldn’t be a surprise when you consider that the people that put the process in place were the ones that benefit from the diamonds in Africa.

DeBeers, the Kimberly Process and its history in Africa

DeBeers was one of the first companies that became involved in mining the diamonds in Africa. By 1888, the London-based company had monopolistic control over the whole diamond market. They completed their monopoly with the formation of cartel, the London Diamond Syndicate, who were that biggest diamond merchants of the time. Today, over two thirds of the world’s diamonds come from De Beers.

They played a “leadership role” in the development of the Kimberly Process.  And now, they “actively engage” in the Kimberley Process through their membership of the World Diamond Council (WDC) executive committee. “This includes participation at each inter-sessional and plenary meeting of the Kimberley Process. We also work actively with other members to ensure the programme is continuously strengthened and, where appropriate, to share our expertise and resources.” (DeBeers Group Document)

This decision to become a part of the process was self-serving. As we’ve seen so far, the Process hasn’t made any significant process in limiting the trade of conflict diamonds. What it did do is give consumers a false sense of achievement and assurance, to push them to continue buying diamonds, which is in the interest of DeBeers.

The DeBeers scheme to maintain control

The cartel dominated the market under colonialism. But when the Imperial era came to an end and other countries began to find diamonds within their own countries, they realized that they would have to adapt.

“DeBeers stake in the African diamond trade had been shrinking before the conflict diamonds were bought into the public arena in 1998. New Rivals such as Australia were marketing their own stones- and DeBeers was already looking at ways to adjust the way that they did business. In the end, De Beers decided to move from being custodian of the market, which was never a very satisfactory position, to being the leader of the industry’ with its own product.” (NYtimes)

The Kimberly Process apparently led to a change in DeBeer’s actions as it brought attention to the diamond trade.  The Capitalist system says that this was a victory – it wasn’t.

“Far from damaging the company, the controversy over diamonds of questionable origin has helped De Beers draw a line between the legitimate trade, which it still dominates, and the unlawful traffic in diamonds among African rebels” ….. “By supporting United Nations embargoes on illicit diamond sales in Angola and Sierra Leone, the company has effectively enlisted the United Nations as a policeman to do the job that dictators and mercenaries once did in keeping more desperate competitors from dumping cheaper stones onto the market.”  (NYtimes)

So DeBeer’s adjusted its actions to allow other countries to enter the trade while maintaining its control and allowing them to continue to exploit Africans. And as a result, the company’s mines in southern Africa account for around 40 percent of production; while marketing deals with Russia and Canada bring its share of sales to around two-thirds of the market.

In the end… the system that created the problem can’t be trusted to solve it.

Time and time again, we’ve learnt the same lesson – the current capitalist system cannot be trusted. They say that they’ve moved past their colonial pasts, that they are allowing countries to become democratic and rule themselves, that any problems that they face are a result of corrupt elites and political instability.

This isn’t quite the case. All of the problems that we see are a result of the choices that the powerful states didn’t just make, but are currently making, and the fact that powerful multinational companies have far too much influence.

“with it Allah guides those who follow His pleasure to the pathways of peace, and brings them out, by His will, from the depths of darkness into the light, and guides them to a straight path.” [TMQ Surah al-Maida 5:16].