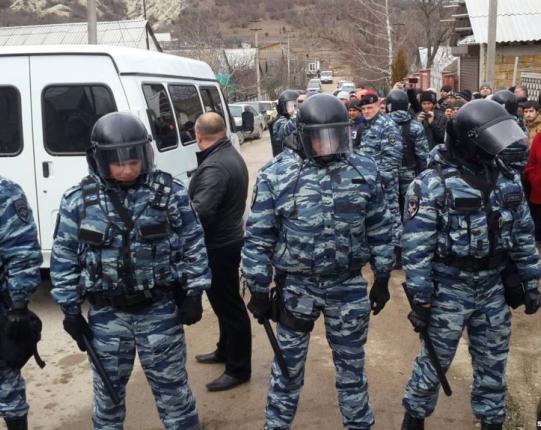 Human Rights Memorial Centre, reported that the number of detainees accused of belonging to Hizb ut Tahrir in Crimea and Sevastopol reached more than 28 members as well as locals of Kyrgyz origin, four of whom have been tried with unjust sentences, 12 are in trial and 14 are under investigation. They are distributed by region as follows:

It is clear to every sensible person that the Russian forces are carrying out a frenzied and unjustified campaign surrounded by lies and deception against Hizb ut Tahrir in all of Russia in general and in Crimea in particular to subjugate its people after its occupation in 2014.

All this is done under false pretenses and slogans, such as Hizb ut Tahrir wants to overthrow the regime with material acts and power of arms, as well as stirring sectarian strife and nationalism. Russia knows very well who are the members (Shabab and Shabat) of Hizb ut Tahrir and how they are at the top of good manners and morals and that they do nothing but good. However, the criminal Putin and his gang continue to accuse Hizb ut Tahrir of false accusations, and dare not come up with a single proof for the condemnation of its members or even the reason why the Hizb was originally banned.

They are fabrications to extinguish the light of Allah and the call for it, which has spread like wildfire among Muslims, even among the Russians themselves after they embrace Islam. Russia will not forget the Islamic state, the Ottoman Caliphate, and how it stopped them at their limits. They did not forget that they paid jizyah to the state of Kazan which they now afflict its people the worst torment out of their hatred of Islam and Muslims.

What would harm the Russians and others if they were to leave between people and Islam? Is not Islam better than the doctrines of Kufr, misguidance and falsehood …?!

Russia, its governments and leaders are enemies of Allah, His Messenger and Muslims, and we will not forget for as long as we are alive, the blood, suffering and persecution of our Muslim brothers and sisters in the world.

We ask Allah to release our brothers and sisters in Crimea, Russia and the rest of the countries, He is competent to do that, Ameen.