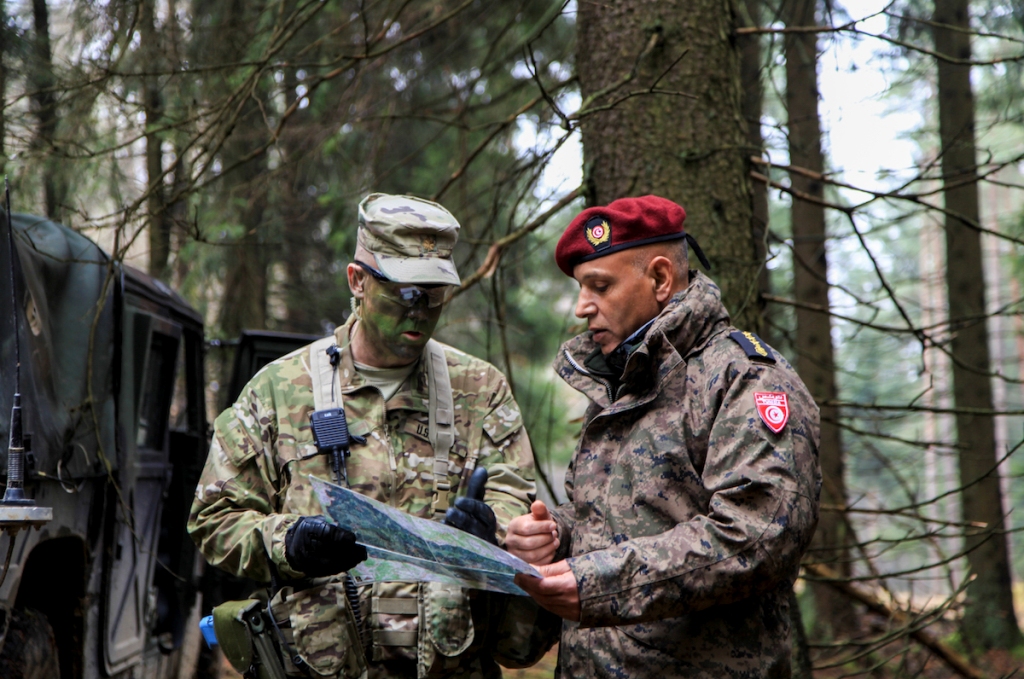 A week after the Libyan Al-Wefaq government took control of Al-Watiya Air Base and retrieved new sites in the Libyan West from Khalifa Haftar’s forces and his allies, Tunisian Defense Minister Imed Hazgui had a telephone conversation with French Defense Minister Florence Barley, and Stephen Townsend, Commander, U.S. Army Command in Africa (AFRICOM), respectively, on 26 and 28 May 2020, he also met the British Ambassador to Tunisia, Louise De Sousa, on the 27th of the same month.

The talks centered on ways to strengthen Tunisian military cooperation with these actors in light of the ongoing military conflict in Libya, but what is serious is what the Tunisian Ministry of Defense concealed and revealed by AFRICOM on Friday, 29th May, in a statement that its commander, Stephen Townsend expressed to Tunisian Defense Minister Imed Hazgui that there is a disposition to deploy “Security Force Assistance Brigade” amid concerns over Russian military activities in Libya. It is shameful that the Tunisian Minister of Defense met this initiative that threatens the country’s sovereignty and its military decision by inviting the American military commander Stephen Townsend to visit Tunisia!

America has paved for its request by intimidating the region’s rulers from Russia, as AFRICOM revealed on Wednesday May 27 that Russia had hidden the identities of at least 14 war fighters at a military base in Syria, before sending it to Libya, to support Russian mercenaries fighting alongside Haftar’s forces, American man in Libya, a tactic reminiscent of America’s use of the Iranian bogey man to push Gulf States to open their lands to American military bases.

The American military command for Africa (AFRICOM) was originally designed to dominate Africa, plunder its wealth and colonize its people, within the framework of the US global strategy to control the sources of oil and wealth and monitor all maritime passages in the world, on the one hand, and to remove the European colonial influence and replacing it with American colonialism on the other, in addition to fight Islam under the pretext of fighting “terrorism” because it sees Islam a real threat to its colonial interests in the world, including Africa, which most of its people are Muslims.

The agreement “Tunisia as a non-NATO ally status signed in 2015” has made our land an advanced base for America in Africa, and your silence on that grave treason has led America to covet the introduction of its forces into our country, which represents a widespread evil if you do not prevent it, since the American armies if they enter a country they ruin it and render the honored of its people humbled, and the Holy Prophet ﷺ has forbidden us to seek help from the disbelievers in war وَلَنْ يَجْعَلَ اللهُ لِلْكَافِرِينَ عَلَى الْمُؤْمِنِينَ سَبِيلاً “And Allah will never allow an authority to the disbelievers over the believers” [An-Nisa: 141]. Nothing will stop the colonial greediness of America and the rest of the Kafir colonial countries of the West and their appropriation of the wealth of the entire world including Africa, except the Khilafah Rashidah (rightly-guided Caliphate) on the method of Prophethood, and without which all humanity will continue to suffer from the greed of colonialism and the injustice of Capitalism.