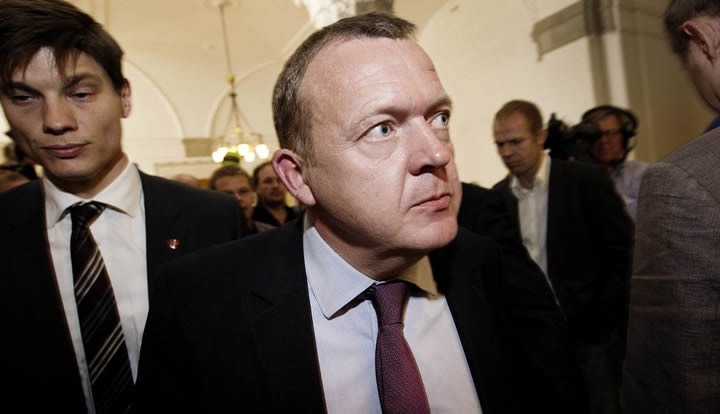 On Thursday, 1st March 2018, Prime Minister Lars Løkke Rasmussen presented the government’s large-scale ghetto plan. Flanked by a total of seven ministers, the plan was presented from inside Mjølnerparken in Copenhagen. One of the holes in the map, as the prime minister has direly described the housing areas of 28,000 families. “We’re ready to go far,” he said. Far away from their own principles and values that is, one must understand.

According to the government, and the general political discourse, the biggest problem in the country is Muslims who do not renounce their identity and embrace assimilation. This is in spite of an ongoing decay in all that Denmark been priding itself of for years and gained international recognition by; with corruption scandals at the highest level, rising poverty, inequality and social misery, significant reduction of the welfare, as well as a standoff with human rights and international conventions.

In the plan, the government uses both the racist term “ghetto” to demonize ethnic and religious minorities, and “parallel communities”, a term, which the government has redefined for the occasion, without evidence supporting that such actually exist, as several Danish researchers have pointed out.

If the politicized ghetto term can even denote areas in Denmark, then these socially troubled areas are just that: a social phenomenon found in all major Western cities, where minorities of all kinds are marginalized and ghettoized. But if you look at developments in recent years in these areas, crime rates are falling and the level of education is rising. What then causes the government to kick in an open door and go so aggressively at the “ghettos”?

One of the criteria for receiving the ghetto-stamp is that an area has a high concentration of people with “non-western” backgrounds, which is another term for Muslims in Danish politics. It has also not been concealed that the initiatives are part of the “struggle of values”. With parallel laws, special rules, double sentences, and state intervention in all parts of life, from cradle to grave, Muslims are to be forcibly secularized and assimilated.

The irony of this whole affair is that it is the government, which in this way creates parallel societies. It can hardly be imagined that, for example, double sentences for tax evasion will be introduced in areas with fine and expensive addresses, where this problem is greatest and most expensive for society.

Rising insecurity in the “ghettos” is a central argument used manipulatively by the Prime Minister for this comprehensive plan. Experts have subsequently clearly rejected that the study, that he refers to, can be used in such a way, and punctured his argument. Rather than the map of Denmark, it is the government’s basis for the plan, which is full of holes. It is clear that the government in a biased way has chosen to attack a problem and then resort to “alternative facts” to support its policies in the worst Trump-like style. The insecurity, which is once again revealed, is the insecurity of Danish politicians regarding their own values and culture, which can be read in one totalitarian approach after another, which aim to force-feed Muslims in this country with Western values, thoughts and lifestyles, now even from one year of age.

This next step in the fight against Islam and Muslims moves Denmark towards apartheid-like conditions with grotesque discrimination against citizens based on ethnicity and place of residence. The plan is therefore a deadly blow to the very core of the values that Danish politicians claim to defend. Liberal democracy is bankrupt when it quickly sorts to compulsion and totalitarian approaches to people with different convictions, known from dictatorship regimes supported and maintained by the West in Muslim countries.

While the principles of the rule of law are being buried in the cold Danish soil, the Muslims must stand firmly by their Islamic identity and stand against repression and apartheid policies.