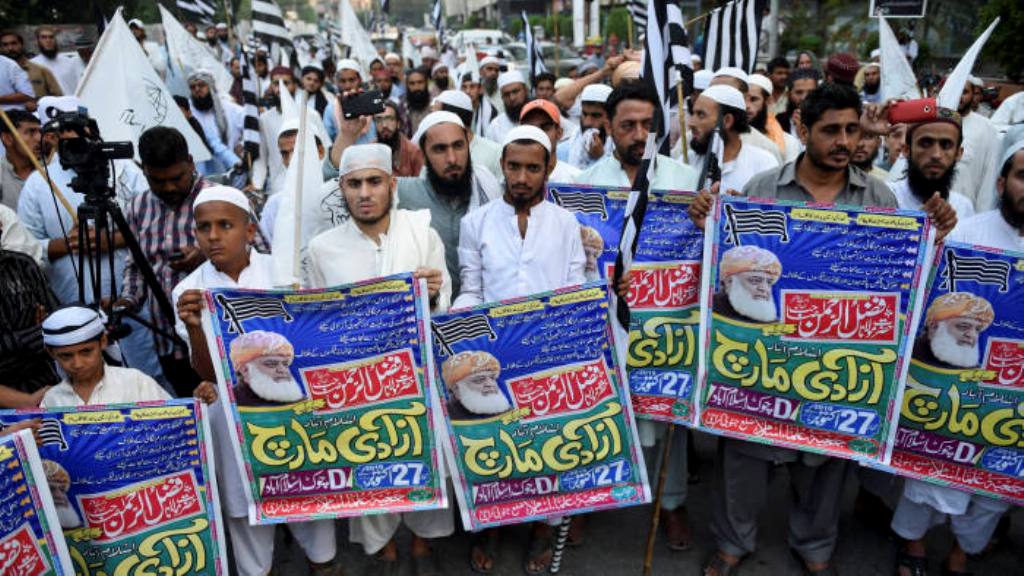 Certainly, democratic politics has nothing to do with the common masses. All manner of democratic circuses and dramas represent nothing more than in-fighting between factions in the ruling elite. Having been repeated propped up, Democracy is now dead on the floor after the latest claim of establishing the Madinah State fell flat on its face, following the fate of all such claims made within Democracy. Like a drowning man clutching at straws, the masses that are crushed under the rock of the IMF by the callous regime, desperately see a glimmer of hope in any, literally any, anti-regime movement. However, the emergency infusion of sit-in protests and marches will never revive the stinking corpse of Democracy. Indeed, the lessons of history and from awareness are bitter, stark and bleak for those who still turn to Democracy. The democratic lawyer movement raised the claim of establishing a “motherly state,” after the people became infuriated by the anti-Islam agenda of the Musharraf government. However, it only gave rise to the back-breaking Kayani-Zardari regime and then promptly went into hibernation. Hopes in Democracy were again raised when the Bajwa-Imran regime, raised on claims of transparency, ending corruption and following the ideals of the Madinah State, in supposed contrast to the Kayani-Zardari and Raheel-Nawaz regimes. However, it completely surrendered economic policy to the IMF and coldly betrayed Occupied Kashmir, such that even previous regimes were made to look good. Democracy has a long, tried and tested track-record of false promises, beginning with the still vivid, painful memories of the so-called change of the Ayub-Zulfiqar regime and the so-called Islamicization of the Zia regime. And the current Azadi (Liberation) March by democratic opposition parties is no different as it raising hope in the hopeless Democracy.

Politics in Islam is poles apart from democratic politics. In democratic politics, everything is fair in war and politics, thus permitting any means to achieve personal or factional interests, with the masses as mere spectators to their own ruin. Democratic politics is the art of possibilities, with reckless abandon of moral codes, scruples and principles. It is a far cry from the politics conducted in Islam. In our great Deen, politics is a Sunnah of the Prophets (as) and a worship of the highest rank. Abu Hurairah (ra) narrated that RasulAllah (saaw) stated that, «كَانَت بَنُو إسرَائِيلَ تَسُوسُهُمُ الأَنْبياءُ» “The politics of Bani Isra’eel were conducted by the Prophets (as)” (Bukhari and Muslim). In Islam, politics is taking care of the affairs of the Ummah through the Shariah law. In an Islamic State, there is no concept of opposition and ruling parties, cutting off the very root of factional in-fighting. Instead, every party is bound by the rules of Shariah to practice the command of Allah (swt) related to enjoining the good and forbidding the evil. All individuals and parties work in harmony to strengthen the Khilafah (Caliphate) and the Khaleefah (Caliph), accounting him strongly over any departure from ruling by all that Allah (swt) has revealed. Anything less than the re-establishment of the Khilafah, ruling by Islam, is just a fraud and deception, completely wasting the time and energy of the Ummah. It is imperative upon the people of power to shun the vicious cycle of factional in-fighting and they should grant the Nussrah to Hizb ut Tahrir for the re-establishment of the Khilafah (Caliphate) on the Method of Prophethood. It is the Khilafah alone that will rigorously shake the oppressive international world order and resume the dominance of Islam on the global stage once again. And this will be, inshaAllah, in the current opportune and promising era, wherein both the Arab and Ajam in the Muslim World are repeatedly uprising against democratic factions, with the US in the full flight of retreat, only looking back to delegate her dirty work to lowly puppet agents.