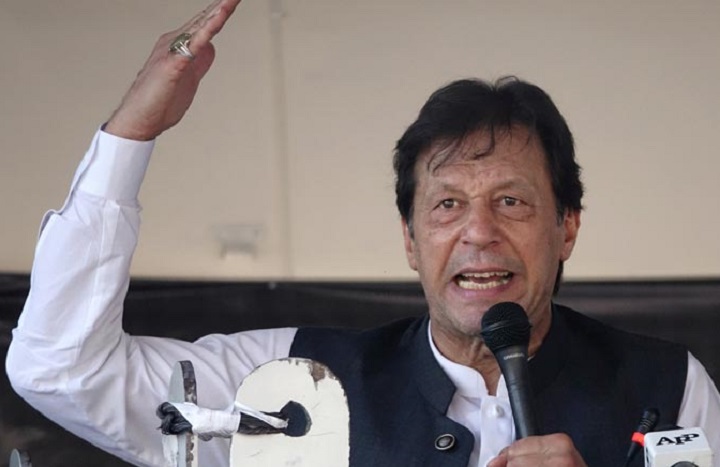 Comment:
Even before his ouster from power, Imran Khan started floating his new narrative that America has conspired to oust him, as he was following an independent foreign policy. In order to support his claim, he presented his tour of Russia, just before the Russian invasion of Ukraine. Actually he had seen that the powerful military establishment had withdrawn its support. This support brought him to power and without it his regime would collapse, as he is a political novice, in the outlying wilderness of Pakistan’s political medium. He knew that whenever elections take place, he will not have anything in his bag to show the people of Pakistan, who suffered immensely under his rule. Therefore, as a tactic, he inflamed the strong anti-American sentiment within the Muslims of Pakistan, to rally them behind him.

During his three year and eight-month tenure, his foreign policy strictly ensured American foreign policy objectives in this region. When he came to power, the US Trump administration wanted the Taliban to sign a peace agreement. His regime pressurized the Afghan Taliban to achieve this objective.  The US wanted Pakistan to cut all manner of support to the Kashmiri Mujahideen. Under the guise of getting off the gray list of FATF, Imran’s regime effectively severed all financial assistance to the mujahideen in Occupied Kashmir.

After Modi annexed Occupied Kashmir forcibly on 5 August 2019, Imran Khan declared on 18 September 2019, “Anyone from Pakistan wanting to fight in Kashmir or go for Jihad in Kashmir would do the greatest injustice to the Kashmiris… Anyone making any such attempt would be an enemy of Pakistan as well as an enemy of Kashmiris.” This statement was applauded by Alice G Wells, Assistant Secretary of State for South and Central Asia, who tweeted, “Applaud PM @ImranKhanPTI’s unambiguous & important statement that militants from Pakistan who would carry out violence in Kashmir are enemies of both Kashmiris & Pakistan. We agree.” When tension escalated between China and India over a region of Kashmir, Aksai Chin, in April 2021, instead of mobilizing Pakistan’s armed forces to liberate Occupied Kashmir, the Bajwa-Imran regime signed a ceasefire treaty with India over the Line of Control. India was then able to move its primary strike corps from the front against Pakistan to the Chinese front. Imran Khan took all these measures to strengthen India because America wanted India to confront China, which it cannot do if Pakistan does not co-operate.

And on the demand of the IMF, Imran Khan passed legislation which gave the IMF access to the State Bank of Pakistan’s accounts. He also implemented other IMF measures that made Pakistan’s debt a cash cow for debt investors, plunging the country deeper into the debt trap, such that half of all tax revenues are spent on interest payments alone.

So practically Imran Khan never tried to make Pakistan’s foreign policy independent. Instead, he walked the same path of treachery of previous civilian and military leaders.

Democracy is an imported system and therefore foreign policy under its shade can never be independent. Nothing short of the re-establishment of the Khilafah will ensure an independent foreign policy. Islam mandates the uprooting of the current colonialist world order, to establish the dominance of Islam and its Dawah. Allah (swt) said,

“He it is Who has sent His Messenger with the guidance and the True Religion that He may make it prevail over all religions, howsoever those who associate others with Allah in His Divinity might detest it.” [TMQ Surah At-Tauba 9:33].

Thus, the Khilafah (Caliphate) will reject the UN, IMF and FATF, unifying the Muslim Lands as the world’s most powerful state and marching towards becoming the world’s leading state.