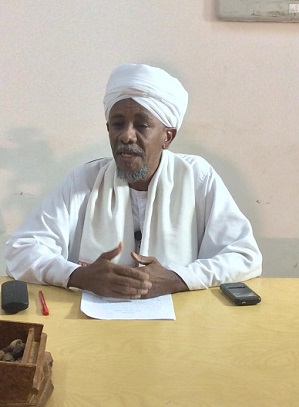 A delegation from Hizb ut Tahrir / Wilayah Sudan, under the leadership of Ustaath Nasser Ridha, Head of the Central Contacts Committee, accompanied by Ustaath Ibrahim Othman (Abu Khalil), the Official Spokesman of Hizb ut Tahrir in Wilayah Sudan, and Abdul Qader Abdul Rahman and Muhammed Mustafa; members of the Central Contacts Committee, paid a visit on Monday morning 11/02/2019 to Sheikh Abdul Wahab Al-Hebr al-Kabbashi, successor of Sheikh al-Kabbashi, at his residence in Sheikh al-Kabbashi suburb in Khartoum Bahri, where they held a deep dialogue on the situation in Sudan in particular, and the situation of Muslims in the world in general, and the way out of these successive crises.

The head of the delegation explained the vision of Hizb ut Tahrir for the radical solution of the country’s crises and that it lies in the resumption of the Islamic way of life by establishing the second Khilafah Rashidah (righteous Caliphate) on the method of the Prophethood, which its rules emanate from the Book of Allah and the Sunnah of His Prophet (saw), which will do justice among people, because it is from the Creator of mankind Who does not favor anyone.

Sheikh al-Kabbashi assured that the Khilafah is the Muslims’ demand, wishing the Hizb to unite Muslims under the Khilafah, and he said, “You are the only ones whose hands did not immerse” [soiled].

We in Hizb ut Tahrir / Wilayah Sudan thank Sheikh al-Kabbashi for honoring the delegation, and for his good reception and greeting despite his many preoccupations. This is an attribute of Muslims, and praise be to Allah, Lord of the Worlds.