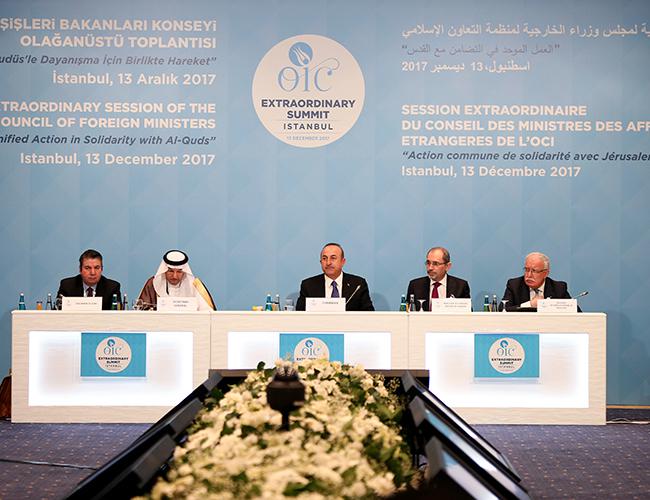 On Wednesday 13/12/2017, the emergency summit held in Turkey by the Organization of the Islamic Conference (OIC), on the invitation of Turkish President Erdogan, was concluded. It was convened to review the developments that resulted from the decision of US President Trump to recognize Jerusalem as the capital of the Jewish entity. The final statement of the summit confirmed that Trump’s decision deliberately undermines the efforts of peace and it falls in the interest of extremism and terrorism; the participants stressed their adherence to a just and comprehensive peace on the basis of the two-state solution, and to adhere to the recognition of East Jerusalem as the capital of Palestine in accordance with international references, and the 2002 Arab Peace Initiative adopted by the extraordinary Islamic Summit in Mecca 2005 – as a strategic choice.

Thus, the rulers of the Muslims continue in their misguidance, their plotting, and surrendering the sanctities of the Muslims, without shame, despite Trump’s loud slap to them, which President Abbas described as the slap of the century; he removed from them the mulberry leaf that concealed some of their nakedness before their people. Despite these slaps by the West, the rulers confirm their betrayal by clinging on to America, the Western countries, and international law and its surrendering solutions.

What is the meaning of their adherence to the international resolutions of the Security Council concerning Palestine, and the Arab peace initiative, and the comprehensive peace, and a Palestinian state on the 1967 borders, apart from recognizing the legitimacy of the occupation on more than 78% of the territory of Palestine; and the division of Al-Quds to East and West, and allowing the domination of the Jewish entity, the poisonous dagger in the Ummah’s body that prevents its revival or restore its dignity?! Trump’s recent declaration sought to give ownership of Al-Quds to the Jewish entity. The Muslim rulers’ declaration and adherence to the peace initiative and the two-state solution want to give the Jewish entity the ownership of three-quarters of Palestine, including what they call West Jerusalem!!

Indeed, the rulers of the Muslims have intensified their treachery, and are no longer deterred to call for surrendering treacherous solutions day by day despite the Ummah’s possession of armies and forces capable to liberate Palestine in an hour of the day, but they emphasize in this declaration their war on (extremism) and (terrorism) which are known to mean Islam, they want a fierce war against Islam and a peaceful and legal struggle against the occupation!!

It is clear that the rulers of Muslims will continue to surrender the issues of the Ummah and its sanctities until their final breath or even the last drop of water in their faces, and they practice various tricks and games in order to mislead the Ummah from the real solutions to its issues, to distract the people away from them and support and prolong the occupation in the Muslim land. The only legitimate solution to the issue of Palestine is the complete liberation from the clutches of the Jewish entity. This is only possible by moving the armies to demolish the forts of the occupation and purify the blessed Al-Aqsa Mosque; which requires the faithful and sincere in the armies to move sooner rather than later, to gain the honour of the liberation and rid the whole of Palestine of the criminal occupation, and to cleanse the Ummah from the harmful misleading rulers.

“O you who have believed, what is [the matter] with you that, when you are told to go forth in the cause of Allah, you adhere heavily to the earth? Are you satisfied with the life of this world rather than the Hereafter? But what is the enjoyment of worldly life compared to the Hereafter except a [very] little.”

Media Office of Hizb ut Tahrir in The Blessed Land-Palestine