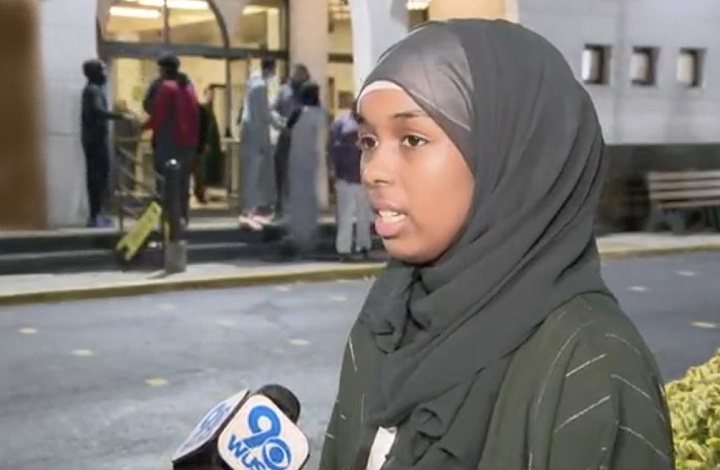 On December 14, 2021, a Muslim high school student, Ekran Mohammed, was shoved down and had her hijab forcibly removed by a fellow student while working on a project in a classroom. This violent incident happened after the student and others had reportedly made Islamophobic remarks and created an Islamic symbol and put an X on it.

The school’s response was to punish the perpetrator and victim by giving them an in-school suspension together. Ironically, on the same day, the US House of Representatives narrowly passed a bill that would establish a special envoy that will allegedly combat and monitor Islamophobia due to the onslaught of anti-Islam and anti-Muslim rhetoric made against Rep. Ilhan Omar by fellow politicians and the rise in Islamophobic crimes against Muslims in the United States; though that piece of legislation is unlikely to pass the Senate. A few days later, however, the school declared that the attack against Ms. Mohammed was not an Islamophobic hate crime despite several student witnesses making statements to the contrary and that her hijab was removed. There have also recently been arson attacks on mosques in Tacoma, WA. and Albuquerque, NM and violent attacks against two Muslim women who were slapped and verbally abused while picking up their children from school in Northern Virginia. These are not the only Islamophobic incidents to happen this year. In fact, the Council on American-Islamic Relations (CAIR) released its mid-year anti-Muslim bias report in July 2021 that states that there have been hundreds of reports of anti-Muslim incidences that include hate crimes, discrimination, school bullying, many of which are against our sisters who wear hijab, as well as, travel and immigration issues.

Islamophobia and anti-Muslim attacks and occurrences are not new in America, nor are they something we should be surprised of anymore. They have been happening for decades and both the government and media are to blame. From the time when Muslims from the African continent were kidnapped and brought to America as slaves, forced to convert to Christianity, or be punished to the 1995 Oklahoma City bombing that had the media laying blame on Muslims before any evidence was presented to today, post 9/11, where we witness on near daily basis hate crimes, discrimination, or violence doled out against Muslims. Anti-Islamic rhetoric and domestic policy became commonplace after 9/11, where mosques, Islamic institutions, and Muslim communities came under constant scrutiny and surveillance. Many cases of entrapment and laws such as the Patriot Act were enacted all in order to demonize Islam and Muslims across the world and to justify the wars and occupations that have continued since then.

Despite what looks like progress over the last 20 years with many Muslims becoming elected officials in the government and bills being introduced to stop Islamophobia, anti-Islamic statements and violence continue to rise annually. Some examples include a nominee for sheriff in Idaho, Doug Traubel who stated that, “Islam is the culture of death” and a Democratic District Leader from New York, Lori Maslow, who tweeted, “Palestinians kill Jews. Think we are going to stand there and let that happen? We value life. They don’t. Never again. And as the Bible says, and you shall wipe the children of Amelek off the face of the earth. Period. Shoot or kill us, we respond.”

It is not just the government policies at work, but the media also plays a big role in perpetuating negative and false stereotypes of Muslims, which result in the fear and hatred people have towards Muslims and Islam. The cost of the wars and the violence that comes with it needs to be legitimized and rationalized. The media is the tool the government uses to achieve that goal and gain public support, or at least enough support to go to war in the Muslim lands.

Since the 1990’s the public has been repeatedly told that Muslims harbor a religious and cultural threat that can only be fought via war as we have seen with the War on Terror and the subsequent invasions of Iraq and Afghanistan; torture, as we saw at Abu Ghraib; suspension of human rights, as we see at Guantanamo. So, habouring Islamophobia at home is necessary to continuously pursue US imperialism in the Muslim world and will continue because the US needs to keep a firm hold on the region. Both conservative and liberal media are one and the same when it comes to the demonization of Islam. They just go about it differently. While Conservative media is obviously biased and hateful towards Islam, as we witnessed during the Trump Era when we regularly heard Fox news journalists calling Islam, “a destructive force” or that, “Muslim immigration means more Islamic terrorism”, liberal media outlets often do the same thing. From Chris Cuomo of CNN saying that Muslims are, “unusually violent” and “unusually barbaric” to Bill Maher who likened the 1.6 billion Muslims of the world to the Mafia who share too much in common with ISIS. This type of hate speech and policies are unlikely to stop any time soon because by blatantly associating Islam with terrorism, Western media promotes Islamophobia and further perpetuates these hateful views toward Muslims in the US to aide Western secular governments in their brutal dominance and oppression in the Muslim world.

Under the secular liberal government, this type of discrimination and oppression is not only legal but has become acceptable the world over. Where the government and media work hand in hand to vilify Muslims, even those who are citizens of the country, in order to create an atmosphere of fear and hate to legitimize its subjugation of the Muslim lands.

“[And they are] those who, if We give them authority in the land, establish prayer and give zakāh and enjoin what is right and forbid what is wrong. And to Allah belongs the outcome of [all] matters.” [TMQ: Surah Al Hajj vs 41]