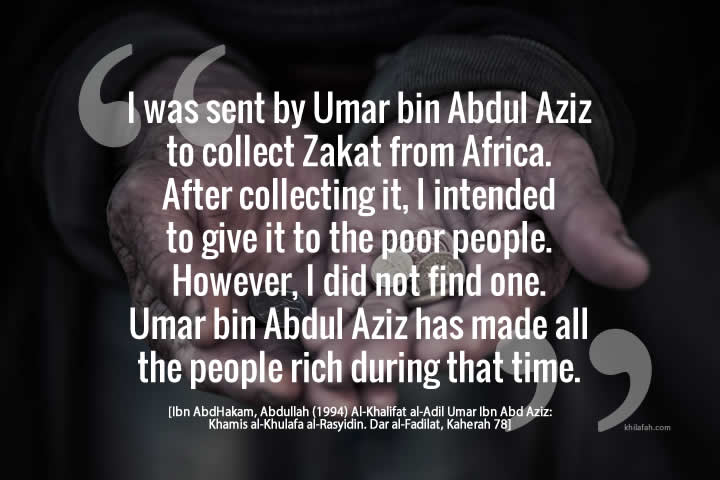 An extract from a letter written by a Rabbi in 1453, urging Jews to travel to the lands of the Khilafah (Caliphate) following their persecution in Europe, highlighting how they would enjoy economic prosperity under the state:

“Here in the land of the Turks we have nothing to complain of. We possess great fortunes; much gold and silver are in our hands. We are not oppressed with heavy taxes and our commerce is free and unhindered. Rich are the fruits of the earth. Everything is cheap and every one of us lives in peace and freedom…” [Philip Mansel, “Constantinople: City of the World’s desire”]

• Islam views the elimination of poverty as a matter of faith. The Prophet (saw) said:

لَيْسَ الْمُؤْمِنُ الَّذِي يَشْبَعُ وَجَارُهُ جَائِعٌ»‏» “He who resorts to his bed with full stomach while his neighbour is hungry is not a true believer.” He (saw) also said:

“In any community, whosoever they are, if a person among them became hungry, they will be removed from the protection of Allah the Blessed, the Supreme.” Poverty is defined as the inability to satisfy one’s basic needs, which are food, clothing, shelter, education and healthcare. The Prophet (saw) stated that every individual – male and female – has the right for their basic needs to be fulfilled:

“The Son of Adam has no better right than that he would have a house wherein he may live, a piece of clothing whereby he may hide his nakedness and a piece of bread and some water.” Hence, as long as these basic needs are not met for every citizen under its rule, the leadership of the Khilafah is obliged Islamically to do everything within its power to rectify the situation.

“The State is to guarantee the living expenses of the one who has no money, no work and no relatives responsible for his financial maintenance. The State is responsible for housing and maintaining the disabled and handicapped people.” [Article 156, Hizb ut Tahrir’s Draft Constitution for the Khilafah]

• Islam’s approach to eradicating poverty is to ensure the effective distribution of wealth, for this is an order by Allah (swt):

(كَىْ لَا يَكُونَ دُولَةًۢ بَيْنَ ٱلْأَغْنِيَآءِ مِنكُمْ) “So that it will not be a perpetual distribution among the rich from among you.” [Al-Hashr: 7] Islam therefore prohibits the accumulation of wealth and resources in the hands of a few.

Furthermore, economic success under the Islamic system is not measured by increased production or high GDP figures but rather when wealth has been effectively distributed amongst its citizens such that poverty is eradicated, where not a single person goes hungry and without their basic needs met, including health care and education, where every able man has the ability to provide for his family, and where prosperity is created which benefits all rather than an elite few, enabling the masses to better their standard of living.

• The unrivalled Islamic economic system embodies the sound laws and principles to eradicate poverty and create prosperity which benefits the masses. This system rejects interest and the hoarding of wealth which concentrate wealth in the hands of a few; implements a low tax-system which encourages investment, businesses growth and employment; prohibits the privatization of natural resources which are a source of poverty creation; and implements a sound agriculture policy which encourages the cultivation of land to produce ample food for the nation, including the reallocation of unused agricultural land to ensure its cultivation.

“The State tackles the task of enabling every subject to satisfy his extra (non-basic needs) and to achieve equilibrium in society in accordance with the funds available to her, in the following way: a) The State grants all its citizens liquid and fixed assets from those owned by bayt ul-maal (central treasury), and from the war booties, and anything similar. b) The State donates from its cultivated land to those who have insufficient or no land. Those who possess land but do not use it are not given land. Those who are unable to use their land are given financial assistance to enable them to use their land. C) Those who are unable to settle their debts are given funds from zakaah, and the war booty, and anything similar.” [Article 158, Hizb ut Tahrir’s Draft Constitution for the Khilafah]

• During the Khilafah of Umar bin Al Khattab (ra), Mu’adh ibn Jabal (ra) was appointed as the state’s envoy to Yemen which was under the rule of Islam. One year, Muadh sent the Khalifah one-third of the Zakat of the people of Yemen. Umar denounced that saying, “I have not sent you as a tax collector, I sent you to take from the rich and give to the poor”. To this, Muadh replied, “I would not send you anything had I found someone to take it from me.” The next year Muadh sent him half of the Zakat from Yemen and they exchanged similar words. In the third year, he sent him all of the Zakat from Yemen, and Umar said something similar to him. And Muadh replied that he did not find a single person in Yemen who was eligible for the collected Zakat. [Kitab al-Amwal of Imam Abu ‘Ubayd al-Qasim abn Sallam] This is because the people of Yemen had reached a level of self-sufficiency in wealth and they were not in need of the charity provided by Zakat.

• The second Khalifah of Islam, Umar bin Al-Khattab (ra) also established the concept of child benefits, providing an allowance to parents to aid them in the financial maintenance of their children. One night a caravan of travellers come into Madinah. The Khalifah said to Abdur Rahman ibn Auf (ra): “Come Abdur Rahman! Let us serve these people.” So, they approached the travellers in order to help them in whatever way they could. Umar (ra) heard a child crying non-stop and was told that this was because the mother was trying to wean him before his time as he had made a ruling that every child in the Muslim lands who stopped breast feeding should receive an allowance. Umar (ra) told her not to rush the weaning. When the time of Fajr prayer came, Umar (ra) led the prayer, but was weeping inconsolably. Abdur Rahman ibn Auf (ra) said: “I swear by Allah! I could not even understand a word that Umar recited in the Fajr prayer because Umar cried so much”. After finishing his prayer, Umar (ra) said to himself: “Woe unto you O Umar! How many children have you killed because of your rule!”. Then he set an allowance for every child within the state, such that there should be no need to hurry with weaning. Khalifah Umar bin Al-Khattab (ra) also established an allowance for those who were disabled within the state.

• “It has been narrated by Yahya bin Said, who was governor at the time during the reign of Caliph Umar bin Abdul Aziz, that he said: “I was sent by Umar bin Abdul Aziz to collect Zakat from Africa. After collecting it, I intended to give it to the poor people. However, I did not find one. Umar bin Abdul Aziz has made all the people rich during that time.” [Ibn AbdHakam, Abdullah (1994) Al-Khalifat al-Adil Umar Ibn Abd Aziz: Khamis al-Khulafa al-Rasyidin. Dar al-Fadilat, Kaherah 78]

• Gomar, one of Napoleon’s scholars during France’s campaign (1798-1801) to occupy Egypt, described the health care services and 600-year-old health facilities that he saw in the Muslim lands as follows: “all sick people used to go the Bimaristan (i.e. hospital) poor and rich, without distinction. Doctors were hired from everywhere in the east, and they were well paid. There was a pharmacy stocked with medicine and instrumentations. Two nursing personnel were serving every patient. Those with psychological disorders were isolated in a separate section and were taken care of. They were entertained by storytelling among other things. Those who recovered (from either physical or psychological illness) would spend some time in the rehabilitation section. When discharged, each patient would be given five pieces of gold so the patient would not need to work as soon as he/she left”.

• “Of the great Syro-Egyptian hospitals of the 12th and 13th centuries, we possess a considerable amount of information. They were built on a cruciform plan with four central diwans or vaulted halls, with many adjacent rooms including kitchens, storage areas, a pharmacy, some living quarters for the staff, and sometimes a library. Each diwan was usually provided with fountains to provide a supply of clean water and baths. There was a separate hall for women patients and areas reserved for the treatment of conditions prevalent in the area — eye ailments, gastrointestinal complaints (especially dysentery and diarrhoea), and fevers. There was also an area for surgical cases and a special ward for the mentally ill. Some had an area for rheumatics and cold sufferers (mabrudun). There frequently were out-patient clinics with a free dispensary of medicaments. The staff included pharmacists and a roster of physicians who were required at appointed times to be in attendance and make the rounds of patients, prescribing medications. These were assisted by stewards and orderlies, as well as a considerable number of male and female attendants who tended the basic needs of the patients. There were also instructors (mu’allimun), possibly aspiring medical students, who trained the non-professional staff. The budget of such institutions must have been considerable, and in fact the budget of the Mansuri hospital in Cairo was the largest of any public institution there.” [U.S. National Library of Medicine]