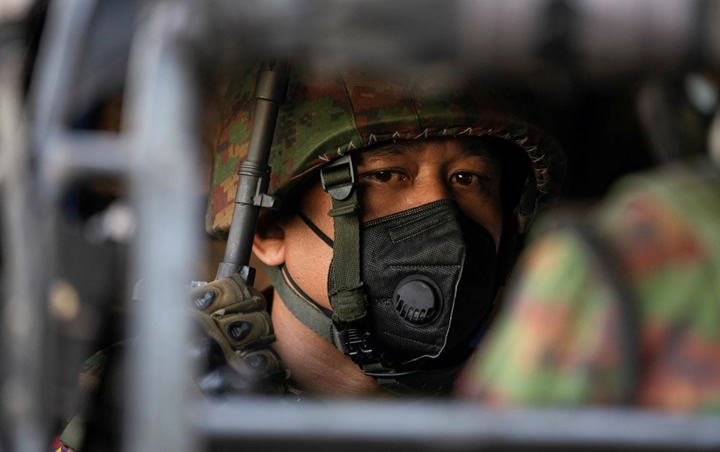 On 1st February 2021, the world was caught by surprise, as Burma’s military leadership detained State Counselor and Minister of Foreign Affairs Aung San Suu Kyi, President Win Myint, and other prominent personalities of the ruling National League for Democracy (NLD) party. Additionally, the military junta announced a state of emergency that would last for at least a year, thereafter, fresh elections would be convened. [csis.org] It appears that the current coup is motivated by two factors. First, the ongoing power struggle between the army and NLD. Second, the geopolitical rivalry between four actors: UK, US, India and China.

Ever since independence from Britain in 1948, the army has been the custodian of power in the country and has meticulously looked after British interests. However, due to Britain’s global weakness, the army was encouraged to share more power with the civilian opposition. The chief protagonist for democracy in Burma and reducing the power of the military was Aung San Suu Kyi whom both America and Britain actively supported. The current standoff between the military and the Suu Kyi was instigated after the results of the November 2020 general elections. The NLD won 396 out of 476 available seats in the parliament—83 percent of the total. [csis.org] The NLD had performed much better than it did in 2015 elections—where it only took 70% of the seats. The latest poll victory not only embarrassed the military leadership but also positioned the NLD to revise the constitution and further reduce the power of the army. Unsurprisingly, the pro military party Union Solidarity and Development Party (USDP) which secured only 33 seats in the recent elections contested the results alleging widespread irregularities. The Union Election Commission, along with local and international observers have repeatedly rejected such claims. [csis.org]

At the heart of the tussle between the army and the NLD is the fear that the military brass will lose powerful provisions contained in the constitution it wrote in 2008. The constitution guarantees the army 25% of the seats in parliament, which allows it to veto any changes to charter amendments. Additionally, the constitution enables the army to exercise control over the defense, interior and border affair ministries, and enshrines the right to nominate one of two vice presidents. The fact that NLD repealed the Emergency Provisions Act in 2016—which for decades has given the army broad powers to hold people without charge—the army rightly fears that with the current mandate, NLD will be emboldened to go much further and remove most of the pro-army provisions from the constitution. Such a redistribution of political power is unacceptable to the army and its chief supporter the UK.

Besides domestic politics, the emergence of China as a rising power in Eurasia is of huge concern to both Britain and America, as well as America’s new satellite India. China has invested heavily in its One Belt and One Road project, which threatens to undermine American hegemony in Eurasia and also limits India’s regional aspirations and influence. China is Myanmar’s largest trading partner, and in January 2020 Xi signed a total of 33 MoUs regarding various projects thereby boosting bilateral relations. [irrawaddy.com]

The casualty of this close relationship between China and Myanmar has been India, which has seen a dramatic decline in influence in Myanmar and elsewhere in the region like Nepal, Sri Lanka, Maldives, Bangladesh and other countries. To counter the rising influence of China via its One Belt and One Road initiative, America, UK and India have started to pressurize countries across Eurasia to review contracts signed with Beijing. This is in addition to America’s raging trade war with China, as well as US efforts to punish Chinese technology firms, especially those devoted to 5G, Semi-Conductors and AI. Complicating matters further is India’s border tensions with China over Ladakh that has injected a new urgency in New Delhi and Washington to reduce Beijing’s menacing influence.

Rather than remain a silent spectator and watch developments unfold from a position of neutrality, Pakistan has been presented once again with a unique opportunity to play power politics in its favour. Pakistan, should exploit the tensions between India, US and China to liberate Kashmir completely from Indian domination. Increasing tensions between the three powers will also diminish support for Myanmar, which Pakistan can take advantage of by partnering with Bangladesh to liberate Rohingyan Muslims from the persecution of Burmese monks and their military supporters. None of this is impossible or difficult for Pakistan to achieve.

“Indeed Allah will help those who help Him. Indeed Allah is Exalted in Might, All-Powerful.” [TMQ: 47: 7]