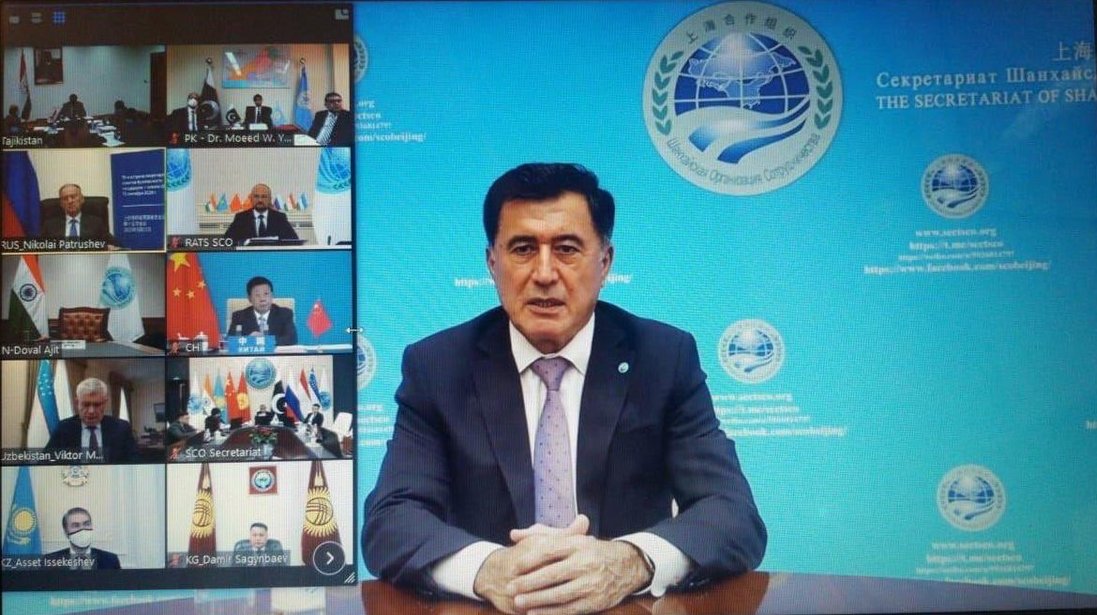 The participants in a constructive manner exchanged views on joint practical activities aimed at countering the challenges and threats to security in the SCO region.

It was especially highlighted that the focus of close attention remains the tasks of joint counteraction to terrorism, separatism and extremism, illegal drug and arms trafficking, cross-border organized crime, crimes using modern information and communication technologies, and illegal migration. All speakers emphasized the importance of normalizing the military-political situation in Afghanistan”, – the SCO secretariat said on its WEB page on September 16.

The main task of the rulers of Muslims in our lands today is to serve and protect the interests of the infidel colonialists. One of such examples are all kinds of alliances and treaties invented by the colonialists in order to maintain their influence on our lands. The SCO, formed in 2001 on the basis of the “Shanghai Five” (China, Russia, Kazakhstan, Tajikistan, Kyrgyzstan), has been and remains an instrument of Russia to maintain its influence in Central Asia.

Although the SCO is not called a military bloc like NATO, the main tasks of the organization are the strengthening of stability and security, the fight against terrorism, separatism, and extremism. One of the first documents adopted by the SCO was the “Shanghai Convention on Combating Terrorism, Separatism and Extremism.”

Let me show some quotes from this convention:

– understanding that terrorism, separatism and extremism are a threat to international peace and security, the development of friendly relations between states, as well as the keeping fundamental human rights and freedoms;

– recognizing that these phenomens seriously threaten the territorial integrity and security of the Sides (of this Convention), as well as their political, economic and social stability;

– firmly convinced that terrorism, separatism and extremism, as defined in this Convention, regardless of their motives, cannot be acquitted under any circumstances, and that those responsible for such acts should be held accountable compliance with the law.

So, under the pretext of fighting these threats Russia is using the SCO as a tool to maintain its influence in the region. On the one hand, Russia, as the legatee to the former possessions of the USSR, sees a threat to the economic, political, social and territorial stability of Central Asia, first of all, from the West, especially from the United States, which seeks to establish its influence on the ruins of the USSR.

On the other hand, Russia sees a threat in the peoples of these lands – Muslims, who had a great cultural, spiritual and political past, and are striving to return to the origins of their religion. And this means the complete eradication of Russian influence in these territories, since Islam prohibits Muslims from submitting to unbelief in government, and requires them to be guided in life only by Sharia, divine guidance.

Russia granted the fake independence to Central Asia coutries and placed there to its puppet dictators, who under the pretext of fighting against terrorism, extremism, separatism serve it by persecuting Muslims who seek to practice their religion in morality, social or economic spheres. And also brutally persecuted Muslims working to revive the Islamic way of life.

Muslims, deceived by these corrupt cowards “imams” who insist on submission to these rulers, must realize that these dictators are not our rulers according to Sharia. According to Sharia, the ruler is considered to be the one who made an agreement with the people that he will rule using the Quran and the Sunnah, and the people swore to him that they would obey as long as he ruled the Quran and the Sunnah. In essence, it is a bilateral agreement between the ruler and the community.

Nobody among rulers of Muslims today has sworn to Muslims that he will rule the Koran and Sunnah, on the contrary, they rule Tagut (despots) and moreover obey to their patrons colonialists. They cannot be our rulers in any way.

It remains for us to work on the revival of the Islamic way of life according to the method of Prophecy. Overthrow the regimes of tyrants, eradicate any influence of the infidel colonialists on our lands, and take an oath to the ruler who will swear to rule according to the Quran and Sunnah, and we, in our turn, will swear allegiance and obedience to him, as long as he follows the orders of Allah Almighty and will not violate His borders. And may Allah help us.