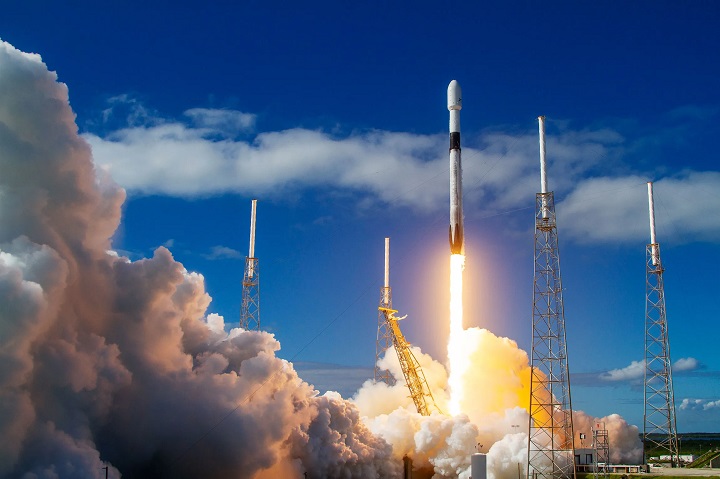 The first stage after the flight safely returned to Earth. It was already her tenth launch. The rocket landed on a floating landing pad. (Source: https://ru.euronews.com/2022/08/13/spacex-starlink-launch)

Comment:
While the Western world has begun space exploration by private commercial companies, the space industry in Muslim countries is in complete stagnation.

The rulers of Muslim countries, over the long decades of being in power, have not been able to master space technology, whether in the field of manned or non-manned missions.

People with superficial thinking hasten to blame Islam for such a backwardness of the Muslim world.

Here, first of all, it is important to note that the development of science and technology is a manifestation of the implementation of a certain ideology, a view of life, in accordance with which a specific community of people is ordered.

History gives many examples of a scientific and technological explosion in a particular society after the adoption of certain ideological values.

Thus, progress is secondary in comparison with the ideology that is implemented in society.

And here it is fundamentally not important to shed light on the basis of this ideological upsurge.

So, for example, Islam led the Arabs of medieval Arabia to an ideological upsurge, which in the shortest possible time led to an unprecedented development of science and technology in the Islamic Caliphate. Muslims not only adopted achievements in this field from other peoples, but also contributed to the development of world science.

When several centuries ago, the states of Europe adopted for themselves the idea of separating religion from life as an ideological basis, abolishing the power of Christianity parasitizing on their peoples; this also led to the most important discoveries in science and technology.

This also happened in agrarian Russia at the beginning of the last century when the idea of communism and socialism, adopted at the state level, turned the Soviet Union into one of the leading powers in 20 years (from 1917 to 1939).

Such a connection between the development of science and the adoption of a certain ideology by society is due to the fact that each ideology indicates a certain method of meeting the needs of society; one of which is the request for scientific and technological progress.

Thus, capitalism has made progress by granting absolute, unrestricted freedoms to society. Such an approach, after harsh dictatorship and censorship by the Christian church, led to the flourishing of science. It is worth noting that the side effects of this approach were the almost complete degeneration of spiritual, moral and human values in these societies; a vivid indicator of which is the almost complete collapse of the family institution in Western countries.

Communism has made progress by implementing its concept that “man is like a spoke in a wheel.” Tight control was established by state, which in the short term may have given rise to some development, but later the state of communism collapsed without firing a shot, under the weight of the problems accumulated from this wrong approach.

Thus, the man-made forms of government inevitably lead to the fact that having generated one positive aspect, another, no less important aspect was destroyed.

As for Islam, it considers the development of science as a universal issue, common to all people, in which it is allowed to adopt knowledge from other peoples.

“You have better knowledge (of a technical skill) in the affairs of the world. ”
(Muslim).

In addition, Islam has established a number of other laws that directly stimulate the development of science and technology.

So, for example, one of them is the following well-known principle:

Islam considers the benefit of a Muslim to society as a sadaka-jariya, a donation that brings a reward from Allah to a Muslim even after his death. Scientific discoveries also fall under this definition.

Therefore, Muslims sought not only, for example, to dig a well so that after the death of the person who dug it, it would bring him a reward from the use of people, but also sought to do something in the field of scientific discoveries, because it is well known that they facilitate the daily life of society.

In an effort to somehow join the Sadaqa-Jariya, many Muslim rulers, caliphs, organized and financed scientific centers and laboratories, which were the decoration of the capital of the Islamic Caliphate.

Unfortunately, we cannot list all Sharia rulings in this area within the framework of this article.

As for the current declining state of science in the Islamic world, this is not due to Islam; on the contrary, it is connected with the dominance of Western-backed secular dictatorships, putting an end in the near future and implementing Islamic concepts in the field of stimulating science, Muslims will again be able to regain their leadership in science, technology and innovation.