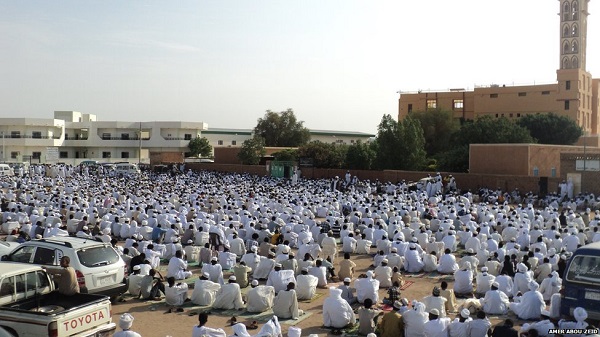 Hizb ut Tahrir / Wilayah of Sudan congratulates the whole of the Muslim Ummah on the occasion of blessed Eid ul Fitr, we ask Allah Almighty to accept from you and us our fasting, qiyam and all good deeds, and we pray that next Eid arrives and the Ummah has united under its state, the second Khilafah Rashidah (righteous Caliphate) on the method of Prophethood.

This Eid comes with Allah’s blessing on the people of Sudan of the removal of one of the Tyrants, who persecuted the people and ruled by that which Allah did not reveal. But the joy of our people, the kind believers, is not complete by the removal of the head of the regime and some of its personalities, but rather it will be complete by the end of the man-made systems, its laws and constitution. The regime is not toppled yet, and the demands of certain forces of a civil state, which means secular state, and the call to mislead the protestors to think that it is the opposite of a military rule, is not promising. Also the attempt to demonize Islam and its personalities shows that this force and those behind it, or rather those leading it are the colonial Kafir West, who want the worst for Sudan and its people who love Islam and love to be rule by it.

We warn the Ummah and its youth of falling in the traps of the criminals; oppression and corruption accompanies man-made secular systems, which ruled this country for decades. The only exit and only justice for this Ummah is under the shade of the second Khilafah Rashidah (righteous Caliphate) on the method of Prophethood, which will liberate us from the box of the unjust oppressive rule.