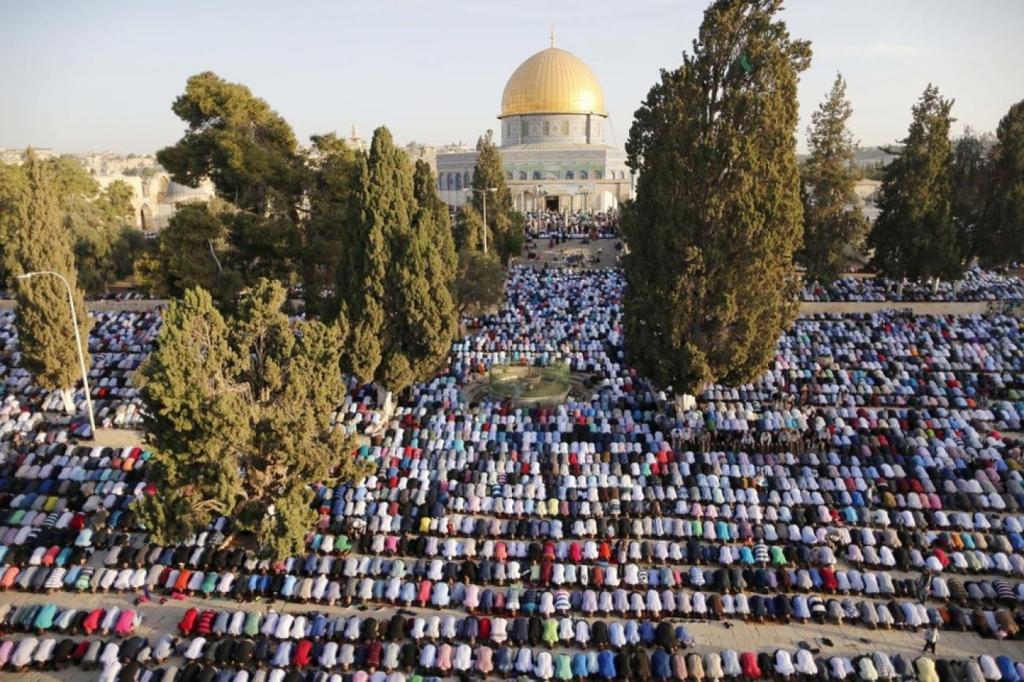 We are delighted at the Media Office of Hizb ut Tahrir in Wilayah Jordan to extend our heartfelt congratulations on the occasion of the blessed Eid ul-Fitr to our Ameer, the Ameer of Hizb ut Tahrir, the eminent scholar Ata Bin Khalil Abu Al-Rashtah, may Allah protect him, and to our people in Jordan and to the Shabab of Hizb ut Tahrir in general; and we pray to Allah Almighty to accept from all of us our fast, Qiyam and all worship and good deeds and to unite the Ummah in the coming Eid under the banner of La Ilaha illa Allah, Muhammad Rasul Allah, and the leadership of one Khalifah in one state; the Khilafah (Caliphate) State on the method of the Prophethood.

It is no longer hidden from you the miserable conditions of Muslims around the world, and the domination of the forces of Kufr and colonialism and their brutal attacks on your lives, wealth, and country. And it is no longer hidden from anyone of you that the forces of evil and tyranny in America, Europe, Russia and China could not have harmed one Muslim without the tools of these colonizers, your rulers, who provide them with all the causes of aid and financial, military and economic empowerment at the expense of your dignity, honor, blood and religion.

On the Lailut al-Qadr, you saw the manifestations of dispersion falling into the arms of Kufr when these rulers met in three summits, the Gulf, Arab and “Islamic” summits. These summits prove that the mere fact of their convening means the fragmentation of the Muslims and their country and that the multiplicity of their banners means only the continuation of the colonialist approach which it started after the partition of the Khilafah (Caliphate) State to meager states and rulers who maintain the alienation of the Ummah and tearing it up and handing it over to its enemies, and even in order not to rise and achieve its revival by unity in an Islamic state that destroys the cancerous entities planted in its body here and there and expelling the Western influence. So, what did the summit of Islamic Cooperation do after fifty years on its establishment to bring together 57 countries with 57 rulers united by their agency to the enemies of the Ummah, and their hostility to Islam and Muslims, except more defeat and humiliation? Allah Almighty says in the clear Revelation: وَاعْتَصِمُوا بِحَبْلِ اللَّهِ جَمِيعاً وَلَا تَفَرَّقُوا “And hold firmly to the rope of Allah all together and do not become divided.” [Al-i-Imran: 103]

Your salvation from what you are in, and your fulfillment of what your Lord has imposed on you, and the return of the manifestations of your unity, your pride and your dignity, have only one way which is to follow the path of the Prophet ﷺ in the conscious intellectual and political work of establishing the Khilafah (Caliphate) State which applies the law of Allah on the methodology of the Prophethood. The mass movement is not enough to achieve the fruits of your uprising against your rulers and their tyranny on you without the existence of a conscious and sincere political leadership, which holds a project of revival and a Constitution of a state ready for immediate application. And this is not achieved today except under the leadership of Hizb ut Tahrir, the frontrunner that does not lie to its people, so come forward to work with Hizb ut Tahrir to establish this Deen and establish the Khilafah Rashidah State (rightly guided Caliphate) on the method of the Prophethood. And know that this obligation does not fall from you and remains in the neck of each of you until it is established, and then you will no longer need to see huge halls of 57 Ruwaibdat rulers, nor 57 artificial banners, but one central headquarters that raises Rayat al-Uqab, the banner Rasulullah ﷺ, accommodating the Khalifah, his assistants and the institutions of government in his state, but its actions shake the earth from under the feet of the world; it mobilizes the armies to liberate the Muslim lands, removes all the influence of the Kaffir colonizer, unites the Ummah in one country and restores its wealth, dignity and glory. It applies Islam on the Ummah internally and spreads it with the Ummah and by it, a message of guidance, light and mercy for all humanity, and it brings the people out of darkness of the rulings of the tyrant Capitalism to the light and justice of Islam.

We ask Allah (swt) that both our work and yours to continue after Ramadan, the month of the Qur’an, as they were during the month of Ramadan. The worship of Allah, rather the fulfillment of Allah’s promise of victory, empowerment, succession and security must continue as high as they were in Ramadan and even higher, because what we and the Ummah seek will be achieved by us supporting Allah and walking on the methodology of His Prophet peace be upon him.

“If you support Allah, He will support you and plant firmly your feet.” [Muhammad: 7]