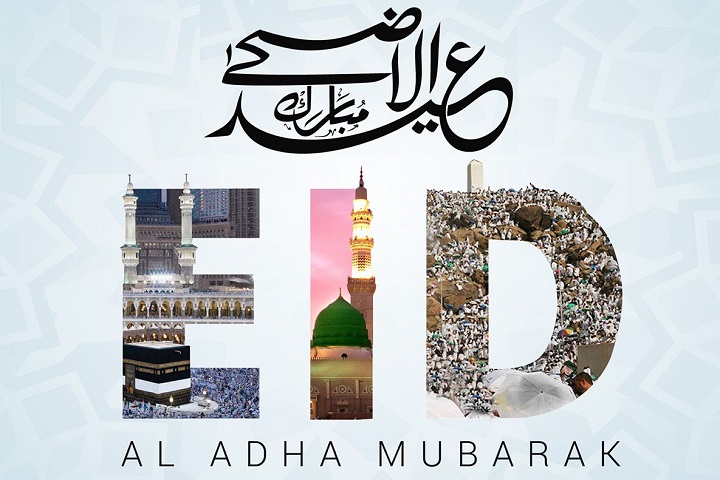 In the name of Allah, the Most Gracious, the Most Merciful. Praise be to Allah, Lord of the Worlds, the Omnipotent, the Mighty, the Exalted, the Great. He who holds the keys to the hoped-for glory, with it He supports those who support Him. He is Able over all. And blessings and peace be upon the most honorable Prophet, who called to Islam, conveyed the Qur’an, structured the Companions upon the Revelation, established the state and confirmed the system of Islam, the master of creation, our master Muhammad, and upon all his family and companions.

Tears of longing illuminate the faces of Hujjaj (pilgrims) as they bid farewell to the glorified Kaaba, and the closeness of the hearts of Muslims perfumes the fields of Eid prayers with delight and happiness, and the joy of Muslim children frolic like energetic birds, adorned with Eid suits… It is Eid Al-Adha; days of happiness that are supposed to pervade Muslim lands. Eid Mubarak to you.

On this occasion, Hizb ut Tahrir extends its warmest congratulations and blessings to the entire Islamic Ummah, asking Allah (swt) to shower it with days of joy, happiness and tranquility, and to fill the Ummah with His blessings.

I am also pleased to extend my congratulations and that of the head of the Central Media Office of Hizb ut Tahrir and all the brothers and sisters working in its departments and units to the Ameer of Hizb ut Tahrir, the eminent scholar Ata Bin Khalil Abu Al-Rashtah, may Allah protect him, asking Allah (swt) to honour the Islamic Ummah with victory and empowerment by his hands.

Eid comes while the Ummah is exposed to a fierce escalation of the attack on what remains of ties to Islam. After decades of the devastation of the direct and proxy wars through which the West tried to gain control over the resources and capitals of the Islamic Ummah, America and those with it from Muslim countries came out militarily and entrusted their agents who were immersed with darkness and criminality in their hearts, to further sabotage it socially. Therefore, the West adopted a “policy of force” in opening the doors of Muslim countries’ societies to the ills of Western society.

The kaffir colonial West has already revived in its country the traditions of the people of the ancient nations that were chided by the Qur’an, thus a variety of societal diseases surfaced there. With the escalation of the spread of these diseases in the West, today it reached the point of a fatal disease; from the actions of the people of Lot (homosexuality), to what Pharaoh did in killing children, to the atheism of those who came after the destruction of Noah’s people. Today, the West is stuck in a predicament of immorality, the innovation of the gender question, and its exacerbation of lack of chastity, to the issue of legalizing the killing of fetuses, to the idea of rebellion against the legislation from the Creator, to the spread of irreligiosity, to the exacerbation of nihilism, including the crisis of depression and drug abuse, which is only the tip of the iceberg for the ticking bomb of Western society.

And because the West is aware of the seriousness of the phenomena generated by these abominations, it wants to spread them in our lands to paralyse them until it ends its crisis with Russia and China, and then completes its colonization.

Thus, the West today has become a black hole, threatening to swallow humanity into darkness that is only known to Allah.

You will not return to being the best Ummah brought out to humankind until you rise up, and enjoin them to do the good that you carry and forbid them of the evil in which they are submerged in. No one will lead you to that except a ruler who restores the Khilafah (Caliphate) for you on the method of the Prophethood, following the example of the Messenger of Allah (saw) as the rightly-guided Caliphs, may Allah be pleased with them, were upon. So, you will spread to the lands as victors, to establish the law of Allah, and to bring humanity out of the darkness of the man-made systems into the clear light of Islam. Allah says:

“You are the best nation produced [as an example] for mankind. You enjoin what is right and forbid what is wrong and believe in Allah” [Aali-Imran: 110]. Allah (swt) also says:

“Alif, Lam, Ra. [This is] a Book which We have revealed to you, [O Muhammad], that you might bring mankind out of darknesses into the light by permission of their Lord – to the path of the Exalted in Might, the Praiseworthy” [Ibrahim: 1].

To each individual of the people of power and protection:

The rulers of the Muslims have betrayed Allah, His Messenger and the Muslims, and a meanness and contempt has appeared from them that no longer leaves their eyes and that sight can no longer be avoided. How long will you, O people of support (Nusra), aid these traitors?! And for how long will you turn your back on the Ummah of your master Muhammad (saw)?! You have seen how the West is ready to throw one of you under the wheels of the people in the blink of an eye to stop the train of change. While Muslims raise on their shoulders those who support them and write their names with ink of light. So, with which of the two teams do you stand, O people of support (Nusra)? Allah says

“Whoever should desire the immediate – We hasten for him from it what We will to whom We intend. Then We have made for him Hell, which he will [enter to] burn, censured and banished * But whoever desires the Hereafter and exerts the effort due to it while he is a believer – it is those whose effort is ever appreciated [by Allah]” [Al-Isra’: 18-19].

In conclusion, we remind Muslims to rejoice on this Eid in the manner that pleases Allah and His Messenger, to spread joy in their homes, neighborhoods and cities and rejoice in the coming days, and take part in the purposeful work and earnest endeavor with Hizb ut Tahrir to establish the second Khilafah Rashidah (rightly-guided Caliphate) on the method of Prophethood.