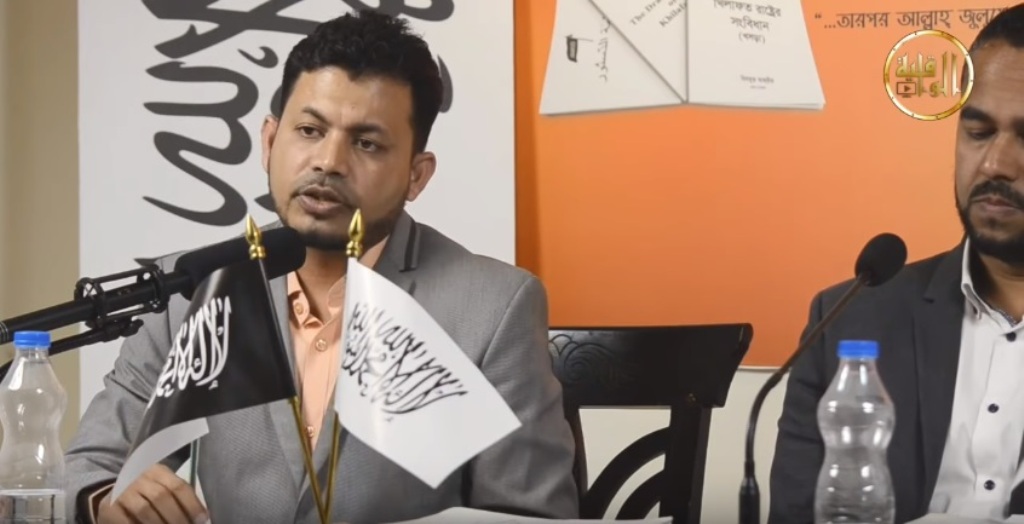 Hizb ut Tahrir / Wilayah Bangladesh, today Friday, 28 February 2020, has successfully organized the online conference titled: “The Khilafah State’s Draft Constitution”. The objective of the conference is to present to the Muslim Ummah, and particularly the people of this country, that Hizb ut Tahrir has prepared the Khilafah State’s draft constitution comprising of 191 articles based on the Qur’an and the Sunnah, with which the party is fully prepared to manage the affairs of the imminent second Khilafah Rashidah (rightly guided Caliphate). It was discussed in the conference how the imminent Khilafah State by implementing the related articles of this constitution will solve the current fundamental crises of this country, such as: securing the fundamental rights of the people (food-cloth-shelter, security-health-education), ensuring high living standard of the people and developing the infrastructures for the country.

The current secular regime, in their decades’ long rule, has failed to fulfill the people’s basic rights, let alone ensuring high living standard. People are continuously waging their movements in the streets against the regime demanding their basic rights, and the regime is brutally suppressing the people, and resorting to innovative tools in its brutality. In the name of development, the government is undertaking mega projects, all known for the huge debts incurred and massive corruptions, and which are not benefiting the people, but rather the burden of the huge debts and taxes to finance those projects are falling on the people. On the people are imposed ever-increasing VAT and taxes, and increasing prices of gas, water and electricity. These are the results of the current secular-capitalist system, where the rulers are sovereign to legislate on behest of their own interest, as well as their whims and desires. Whereas, Allah (swt) says, إِنِ الْحُكْمُ إِلَّا لِلَّهِ “there is none but Allah is the legislator” [Yusuf: 40]. In fact, in one hand the current ruling class are exploiting this sovereign power to secure their own interests, the interest of a few capitalist elites and the interests of their masters – kafir colonialists, and on the other hand they imposing zulum (oppression) on the majority of the people. Allah (swt) says, وَمَنْ لَمْ يَحْكُمْ بِمَا أَنْزَلَ اللَّهُ فَأُولَئِكَ هُمُ الظَّالِمُونَ “who do not rule by what Allah has revealed, they are the zalim” [al-Maidah: 45]. The only way out of this is to re-establish the Khilafah Rashidah by removing this secular-capitalist system and the current ruling regime. In this context, Hizb ut Tahrir / Wilayah Bangladesh has organized this online conference.

For participation in the conference, the activists of Hizb ut Tahrir have done huge interaction with people that has created huge response from them. The people have participated in the online conference with enthusiasm.

We thank all, JazakAllahu khair, who have worked tirelessly to make the conference a success. We are ending with du’a to Allah (swt) that the movement of re-establishing the Khilafah Rashidah reaches its desired destination under the leadership of the Ameer of Hizb ut Tahrir, Sheikh Ata Bin Khalil Abu Al-Rashtah, that He (swt) allows us to re-establish the Khilafah Rashidah soon with the support and active participation of the Muslim Ummah.