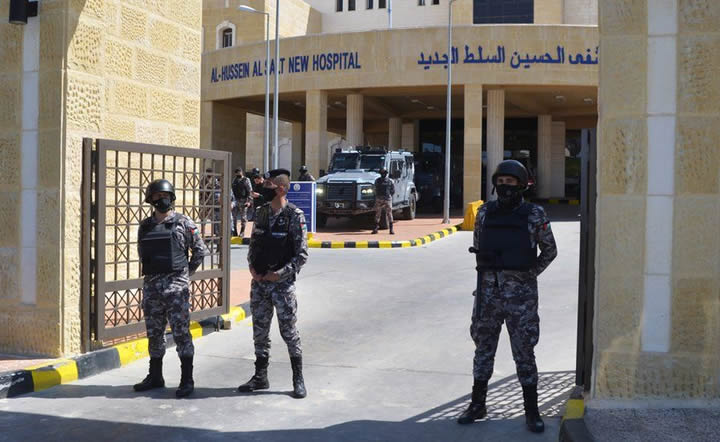 We followed what was reported by the media about the disaster that befell Al-Hussein Al Salt New Hospital, including deaths of a number of patients whose oxygen supplies were cut off, which in turn exacerbated their health condition and led to their death. To begin with; we give our condolences to our people in As-Salt for their great affliction, and our prayers for the speedy recovery for those still suffering.

Faced with this tragic incident, it is necessary to put matters in their true perspective, and that the discussion should be on the level of the crime to which our people are exposed to in this country, and the health sector and the rest of the sectors that are about to collapse.

First: Responsibility must be held by the real parties responsible for this disaster, that is the head of the regime in Jordan, so the state is responsible for health and providing medicine and medical treatment, since they are included as part of the mandatory care by the state. It is not correct for the arrows of accountability and negligence to be directed towards employees who have no powers. The origin of the disease is in the nature of the system implemented in this country, which is the rotten capitalist system in which the state relinquishes caring responsibilities and entrusts them to private sector companies, putting people’s health and interests in the hands of companies that think nothing but of profit and profit, in addition to the poor care clearly visible in the state’s management of the file of lockdown and closures confusion that the state is in.

Third: The administrative system of welfare in the Khilafah (Caliphate) state is based on simplicity and speed in providing service, as well as competence by those in charge of management. Excelling in doing actions is mandated by Shariah. In order to achieve this excellence in meeting of interests, the administration must have three characteristics: One of them: simplicity in the system because it leads to ease, complexity creates difficulty. And the second: to expedite the completion of transactions because it leads to facilitation for the stakeholder. And third: the ability and adequacy of the person assigned to work, and for health interests in particular, the speed, simplicity and distance from complexity in administrative transactions is the first and most important, as the disease is an urgent need that delaying its treatment may aggravate it and increase the resulting damage, also the patient cannot afford to procrastinate and wait for the complexities of transactions.

O Our People in Jordan: Isn’t a hundred years enough of implementing the unjust, corrupt capitalism and its rotten and worn out administrative system that brought you the reasons for perdition, so that you would realize that your salvation and your liberation is by implementing the law of Allah by establishing the Khilafah Rashidah (rightly guided Caliphate) on the method of prophethood?! In it is your salvation and preservation of your livelihood and the happiness of the two worlds, and we in Hizb ut Tahrir to extend our hands for you to establish it Khilafah Rashida (rightly guided Caliphate) on the method of prophethood that removes from us the injustice of the kufr Capitalism and its poor care, and we replace it with the true care state that the Lord of the worlds (swt) promised us, and that His honorable Messenger gave us its glad tiding, the rightly guided Khilafah on the method of the Prophethood. Allah (swt) said: