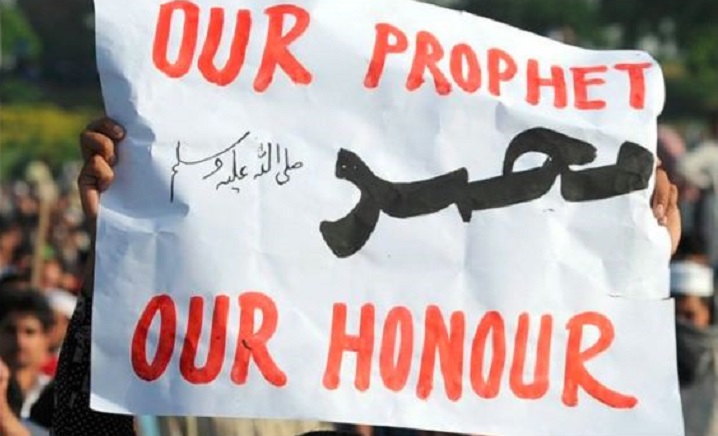 The barrage of blasphemy spread from Denmark and France, to the rest of Europe and then on to the US. It has now even spread to the lowly mushrikeen Hindus. The honor of our beloved Prophet (saw) has become a source of open mockery. Today, any lowly man or woman can blaspheme, because there is no Khaleefah to protect the honor of our Prophet (saw). Be it a democratic ruler or a dictator, the current rulers of Muslims are never guardians of the honor of our Prophet (saw). Instead, they are the guardians of the global, secular colonialist order, before which the Ummah has no weight, whilst there is no sanctity for any religion, let alone Islam. These rulers will only issue empty condemnations under public pressure. They will only undertake populist spectacles; such as cheap gestures against Islamophobia. They will absolve themselves of their responsibility by speaking at colonialist forums, such as the United Nations. However, they will never take any firm action. In the era of the Khilafah (Caliphate), the major powers of the time paid heed and blasphemy was silenced. Thus, the Khaleefah Abdul Hameed II forced both Britain and France to silence blasphemy, due to the threat of Jihad by the armed forces of the Islamic Ummah.

Without the Khilafah as a shield, today’s Raja Dahir Modi grew in hostility. He forcibly usurped Kashmir, handed out life imprisonment to the leadership in Kashmir and supervised the demolition of masajid. He deprived Muslim daughters of the right to wear the hijab, whilst his courts deprive Muslims of the right to practice their Deen. Why would Modi not do so, when General Bajwa and his followers, who are responsible for stopping Modi, are walking in front of Modi upon American dictation? They grant Modi the gift of ceasefire on the Line of Control, as his army is shaken by China. They talk of increasing trade relations through formal channels. They maintain secret backdoor channels. They take credit before their Western masters for restraining the Muslims of Pakistan before India. They take brutal measures to prevent Muslims from being influenced by the concepts of Jihad and Khilafah. They cite weak economy and the need for geo-economics to demoralize the armed forces and dampen their desire for martyrdom and victory.  They do so even though the Muslims of Pakistan are ready to sacrifice for the sake of Allah (swt), reviving the spirit of the Battle of Tabuk, whilst liberating the whole of Kashmir.

O Officers of the Armed Forces of Pakistan! The perfect and permanent protection of the honor of our Prophet requires only a few steps by you. Grant your Nussrah to Hizb ut Tahrir now for the re-establishment of the Khilafah (Caliphate) on the Method of Prophethood. It is the Khilafah that will silence the tongues and still the hands of the arrogant blasphemers. At that time even the thought of committing blasphemy by accident will haunt them in their dreams. It is the Khilafah that will mobilize you for the Conquest of Hind, encouraging you in your endeavor to seek martyrdom or victory, for the pleasure of Allah (swt). It is the Khilafah that will replace these usurping rulers and military commanders, with commanders and rulers who love you, whilst you love them. For them nothing will be more important than the sanctity of the Muslims, the Deen of Truth and the Prophet (saw). It can all happen within just a few hours at your hands. It is indeed great burden on your necks which you must honor, for you are accountable to Allah (swt). Grant your Nussrah now and replace empty speech, with the Takbeeraat of victory over the kafireen. Allah (swt) said,