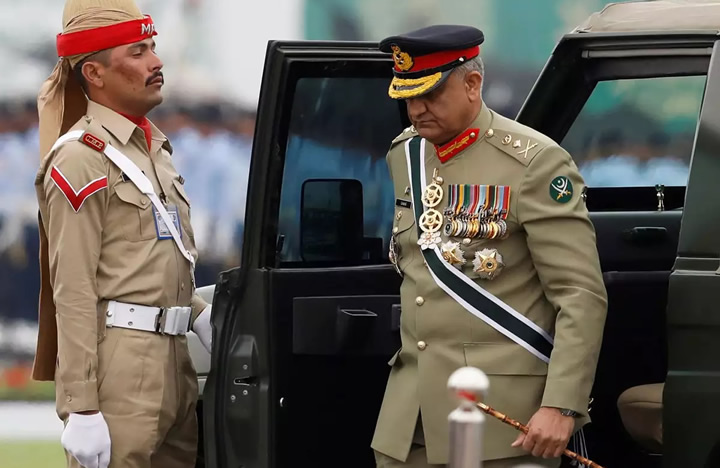 The recent statement by General Bajwa to “bury the past” at the Islamabad Security Conference held on 17th March 2021, in reference to Kashmir and India stirred a hornet’s nest across all spectrums within Pakistan, with criticism being the salient characteristic. This criticism has ranged from accusations of outright treachery to “a poor choice of words,” an underestimation of the depth of opposition of the public, a desperation for peace with India and letting India control the narrative – to list just a few.

The first session of the Islamabad Security Conference, featured former ambassador Riaz Mohammed Khan who quite candidly stated that he did not expect India to reverse its position in Kashmir, unless there was a “violent movement” in Indian occupied Kashmir, escalating to war between Pakistan and India. Hence, if India is not expected to reverse its abrogation of Article 370, and war has been clearly ruled out by both Imran Khan and General Bajwa then the Islamabad Security Dialogue and the ensuing discussion on “geo-economics” is all about creating “other than India” focus. In his speech, General Bajwa spoke in detail of the economic potential of Pakistan in the region1 :

“…it is important for us to embark upon a solid economic roadmap, backed up by infrastructural developments and regional integration. Our choices with respect to the same have been clear and explicit.”

This focus on economics is not a consequence of the current political impasse; rather, it appears to be far more sinister. There seems to be a premeditated plan to focus Pakistani public opinion on “other than India” through the economic integration of Pakistan with India. In the interview between Moeed Yusuf and Karan Thapar aired on 15th October 2020, Moeed Yusuf stated2 :

“…Pakistan is the melting pot of all positive global economic interests…it’s a country that’s looking for regional peace – that’s why we want peace in Afghanistan, we bent over backwards, why? Because we want connectivity to central Asia. CPEC, why? Because we want north-south connectivity, $60 billion in our economy – we are actually helping livelihoods. East-west connectivity, let me say this, it may surprise you given the Indian narrative. Pakistan wants connectivity to the east, unfortunately, India has been running in the polar-opposite direction.”

Given that economic connectivity was discussed almost six months ago, and publicly, means that the “lets bury the past” comment was not a “poor choice of words”; rather, they were consistent with the above discussion to move ahead with economic integration by “burying” the core issue of Kashmir. If economic integration was such a great idea, why implement a disastrous IMF program and wait for the loss of Kashmir? It clearly indicates that the Imran Khan and General Bajwa regime not only had no intention to liberate Kashmir; rather, they were silent observers to enable the Indian revocation of article 370. This would then lay the basis of a Pakistani refocus towards “geo-economics”.

Ashis Ray published an article in the Spectator3 on 5th March 2021, narrating an interesting conversation he had with the then Pakistani Ambassador to Washington, Jalil Abbas Jilani. The discussion surrounded the granting of most favored nation (MFN) status to India under the guise of “Non Discriminatory Market Access (NDMA)” Treaty in January 2014, an election year in India. The article goes on to state:

“The Pakistani cabinet was on the verge of formally approving the pact when…Modi…asked Pakistan via its ambassador in Washington, Jalil Abbas Jilani, to postpone ratifying the deal until he came to power in May that year.”

“Jilani explained that Modi’s ‘BJP felt that the grant of MFN by Pakistan during the election would be advantageous to Congress, which was then in power.’…Pakistan agreed to the request, feeling that it would be wise to start on a positive note with the incoming Modi administration.”

Did the Pakistani establishment support the rise of the BJP with its anti-Muslim history? Over the period from 2015 to 2019, back channel talks were a consistent theme between Pakistan and India. In June 2015, Modi telephoned Nawaz Sharif and wished him Ramadan greetings, followed by a meeting on December 6, 2015, of India and Pakistan’s national security advisors in Bangkok, discussing a range of issues including terror and Kashmir. At the end of the year, this friendship peaked with Modi’s surprise visit to Pakistan to attend the wedding of Nawaz Sharif’s granddaughter on December 25 2015, in which Modi was accompanied by the Indian Steel tycoon, Sajjan Jindal. The latter was reported to have later met Nawaz Sharif in April 2017 in Murree4. Hence, the support of the rise of the BJP and then pursuing back channel discussions to settle Kashmir were a norm of the Pakistani establishment. During this period, tensions between Pakistan and India went through their highs and lows following the Pathankot and Uri attacks. Yet at no point were these secret channels closed. Further, the capture of Indian Air Force pilot Abhinandhan on 27th March 2019 and his release within 3 days in “the desire for peace”5 was indicative of that “close” relationship between the Pakistani establishment and India.

For those who want to give the benefit of the doubt, the ice gets thinner as one reviews the timeline of events leading up to and post 5th August 2019.

• On 27th February, an Indian Plane was downed by the Pakistani Air Force and the pilot was captured, but subsequently released in order to reduce tension.

• On 1st March 2019, on the day Abhinandhan was released, India informed the US of its plans to revoke article 370. The article published in the Dawn6, stated – “…in February, two days after the Pulwama attack, India’s National Security Adviser Ajit Doval had phoned his US counterpart John Bolton of plans to do away with the special status.”

• In the BJP manifesto7 published before the elections as reported on 8th April 2019, the BJP state: “We reiterate our position since the time of the Jan Sangh to the abrogation of Article 370, read the BJP’s ‘Sankalp Patra’ for Lok Sabha elections 2019.”

• On the 9th of April, 2019, a day after, Imran Khan states8 “…perhaps if the BJP — a right-wing party — wins, some kind of settlement in Kashmir could be reached”

• From the end of July 2019 to 5th August 2019, Kashmir witnessed the mobilisation of 100 additional companies of security forces in Jammu and Kashmir, cutting of internet links, absolute curfew leading to the ultimate revoking of article 370.

• Post August 5th 2019, no single statement of the Imran Khan and Bajwa regime indicated they were going to challenge the revocation, rather the flurry of visits to Pakistan from the IMF and FATF strengthened the hand of Bajwa with the excuse that the economic situation does not permit any military adventures.

• Post 5th August 2019, the Pakistani establishment did in Gilgit Baltistan, what the Indians had done in Kashmir. By swiftly granting Gilgit Baltistan provincial status, the LoC became the defacto border – serving Indian objectives.

The US need to strengthen India against China is well understood in political circles now, and the achilles tendon was the Kashmir issue, which was a drain on Indian political, economic and military resources. Annexing Kashmir as part of the Indian union was an essential requirement to strengthen India, and the Pakistani establishment willingly supported this.Cameron Munter the former US ambassador to Pakistan was also on the panel during the 1st session of the Islamabad Security Conference. During his speech, he stated10:

This change in focus could only have been achieved after the Indian annexation of Kashmir. In more simple terms, his statement could be reworded as “Pakistan has helped the US achieve its geostrategic objectives in a way by which Pakistan is no longer important to the US – geo-strategically”. Hence, the Islamabad Security Dialogue is not about security, but about refocusing the society to accept integration with India. That is why they waited almost two years after the annexing of Kashmir – the “geo-economics” aspect is just a red herring.

The timing of the conference and General Bajwa’s infamous comment of “lets bury the past” raises some interesting points.

1. First, it is almost two years since the annexation and hence within the strategic and influential circles of Pakistan, the LoC has become the de facto border. What is required is to move towards formalization of that understanding.

2. Second there is a need to focus Pakistan on “other than India”, and economy is always an attention grabber.

The preceding analysis warrants justification of the mentality of a ruling establishment that desires to strengthen India in order to achieve strategic imperatives of the US. It is well understood that regional economic integration really means Indian domination, so it is strange that it is framed within the context of Pakistan’s security concerns. So our rulers are complicit, not politically naïve. They have worked hard to achieve this solution at the expense of weakening the Muslims of Pakistan, politically, militarily and economically.

Allah (swt) in the Quran states,

“O you who believe! Betray not Allah and His Messenger, nor betray knowingly your Amanat (things entrusted to you, and all the duties which Allah has ordained for you).” [Surah al-Anfaal 8:27].

The Two Sahihs, Bukhari and Muslim, narrate the story of Hatib bin Abi Balta’ah (ra), who was a Companion that participated in the Battle of Badr regarding the revelation of the Ayah. In the year of the victory of Makkah, he wrote to the Quraysh alerting them that the Messenger of Allah (saw) intended to march towards them. Allah (swt) informed His Messenger (saw) of this, and he sent a Companion to retrieve the letter that Hatib sent, and then he summoned him. He (ra) admitted to what he did. ‘Umar bin Al-Khattab (ra) stood up and said, يا رسول الله، ألا أضرب عنقه، فإنه قد خان الله ورسوله والمؤمنين؟ “O Allah’s Messenger! Should I cut off his head, for he has betrayed Allah, His Messenger and the believers.” The Prophet (saw) said, «دَعْهُ فَإِنَّهُ قَدْ شَهِدَ بَدْرًا، وَمَا يُدْرِيكَ لَعَلَّ اللهَ اطَّلَعَ عَلَى أَهْلِ بَدْرٍ فَقَالَ: اعْمَلُوا مَا شِئْتُمْ فَقَدْ غَفَرْتُ لَكُم» “Leave him! He participated in Badr. How do you know that Allah has not looked at those who participated in Badr and said, Do whatever you want, for I have forgiven you.”

“nor betray your Amanat” and said,

“The Amanah refers to the actions that Allah has entrusted the servants with, such as and including what He ordained. Therefore, Allah says here,

“nor betray…”, ‘do not abandon the obligations.’”

“However, it appears that this Ayah is more general, even if it was revealed about a specific incident. Such rulings are dealt with by their indications, not the specific reasons behind revealing them, according to the majority of scholars. Betrayal includes both minor and major sins, as well those that affect others.”