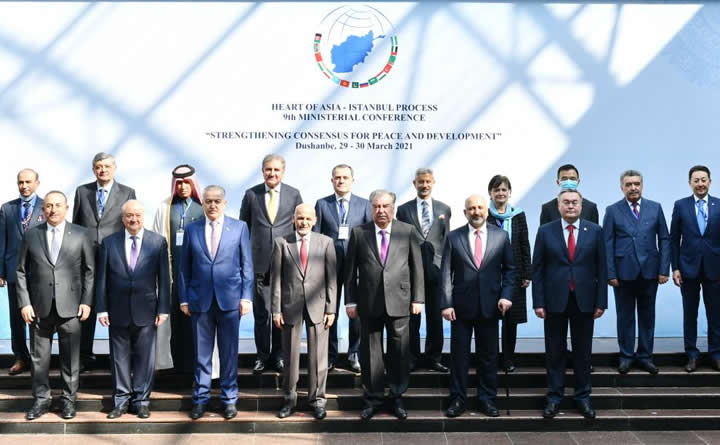 A conference on Afghan settlement was held in Dushanbe, Tajikistan on the 30th of March, reported Kommersant news agency. On Tuesday, Heart of Asia – Istanbul Process Conference was held in Dushanbe, the main theme of which was regional cooperation and the reconstruction of Afghanistan after the expected end of the conflict in this country. The forum was attended by representatives from 14 countries of the region, including Russia. Russia was represented by Foreign Minister Sergei Lavrov, who recorded a video address to the participants, and a Russian delegation that arrived in Dushanbe. The forum participants agreed that the situation in Afghanistan remains alarming, but they did not find the solution what to do about it.

The Heart of Asia – Istanbul Process Conference has become an important image event for Tajikistan and a rare opportunity to gather so many foreign guests in Dushanbe at the same time. One of the most important guests among them was Afghan President Ashraf Ghani, who during the forum reminded that “Afghans have been deprived of the right to peace for 42 years” and called on the international community to “promote inter-Afghan dialogue”. The rest of the participating countries were represented at the level of foreign ministers and below. The Russian President’s Special Representative for Afghanistan Zamir Kabulov was personally present in Dushanbe, and Foreign Minister Sergei Lavrov made a video address.

Comment:
The current border between Afghanistan and Tajikistan, like these two republics themselves, appeared quite recently, with the arrival of colonialists to these lands. The Republic of Tajikistan appeared and gained “independence” after the collapse of the USSR. President E. Rahmon came to power with the help of Russia. Rahmon’s policy, both inside the country and abroad, does not deviate even one step from the Kremlin’s instructions. The Russian armed forces are still on the territory of Tajikistan and control security of the borders. So, the country is slave of Russia.

After the US military invasion of Afghanistan in 2001, the colonialists announced the creation of the Islamic Republic of Afghanistan. The current president of the country was promoted to office in 2014 with the help of the US colonialists. The country is divided into two parts. The first is occupied by the invaders – the United States. Another part of the country is controlled by the Taliban mujahideen, who have been fighting the occupiers for 20 years. It is clear that President A. Ghani is subordinate to his masters – US colonizer and cannot take a step without their permission.

Both leaders E. Rahmon and A. Ghani are puppets. How can they solve the problem of Afghanistan!? The United States is a world power that fights Islam and Muslims around the world and seeks to colonize all countries in the world. Russia, the heir to the world power of the USSR, although weak, has ambitions and also wants to rule.

Russia in USSR times already has a bad experience in relations with the Muslims of Afghanistan. The United States has gained 20 years of experience in dealing with Muslims in Afghanistan. And yet they cherish the hope of a complete colonization of Afghanistan. But history shows that after hard trials, Muslims still win. So it was under the Prophet Muhammad (saw) in Mecca, when it looked like Muslims would perish, Allah Almighty sent helpers from Al-Medina Al-Munawara. So it was during the invasion of the Mongols, when it seemed that the enemies could not be stopped, the valiant commander Sultan Kutuz defeated the Mongols in the month of Ramadan in the Battle of Ainjalut. And there are many such examples.

The war in Afghanistan and tyranny in Tajikistan are the consequences of the colonialist policy of the infidels/Kuffar. These problems will not be solved by puppets who are far from their people. They hold out at the expense of the strength and support of the unfaithful colonialists. And they will continue the policy of their masters, since they themselves are like toothless children who cannot even eat without assistance.

The colonialists are worried about only one thing, about the strengthening of the consciousness of Muslims about the Islamic State of the Caliphate and the desire to live according to the laws of Almighty Allah. They are afraid that Muslims will unite and revive the Caliphate.

Muslims of Afghanistan and Tajikistan are brothers! Allah Almighty said in the Qur’an:

“The believers are but brothers, so make settlement between your brothers. And fear Allah that you may receive mercy.” [49:10].

Join the work of Hizb ut Tahrir to revive the second righteous state of the Caliphate (Khilafah Rashidah) on the method of the Prophethood! Unite your forces, drive the unfaithful colonialists out of our lands! Erase the borders drawn by the colonialists! Establish a second righteous Caliphate! Hurry to the pleasure of Allah! And may Allah help us!