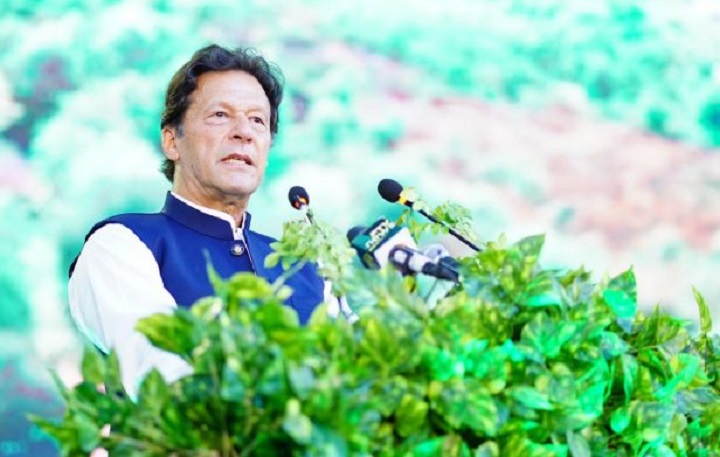 DERA ISMAIL KHAN: Prime Minister Imran Khan Thursday said if food crops production did not increase and the population explosion continued, the country might face famine and poverty in the years to come. Expressing his concerns about the fast growing population in Pakistan, which had gone from less than 40 million in 1947 to around 220 million at present, he said the growth could be checked through enhanced education levels and primary healthcare facilities. He said that Pakistan’s already large population was growing at a rapid pace. (The News)

Comment:
Our rulers, instead of helping us out of the situation that their predecessors have put us in, tell us to just not be, as in their opinion number of people of the Ummah, is the root cause of hunger. But they also need people to serve them and work for them. So our presence should not be felt, but we must perform the desired labour and then chant slogans in their favour. Imran Khan needs to know that his job is not only of giving dictation and pointing out the flaws of the people. He should be asked why there is a food crisis in a country whose economy is agriculture-based? Who is responsible for systematically destroying the agriculture sector in the country? Why do we have to import our food? It’s not the feeding mouths that are destroying agriculture of Pakistan, it’s deliberate misuse of the resources and not accepting the responsibilities assigned to a Muslim ruler. Water shortage is one of the main reason for agriculture crisis in Pakistan.

The data obtained by the Pakistan Economic Survey 2016-17 shows that the share of agricultural output in the gross domestic product (GDP) is 19.5 percent, providing 42.3 percent employment to the labour force. Water resources are the lifeline for Pakistan. A report of the Pakistan Academy of Sciences, Islamabad (PASI) published in 2019 states that the minimum per capita domestic water requirement is 50 litres whereas 2,600 to 5,300 litres water are needed to grow food for one person per day. Therefore, food security is directly related to water security as 50 to 70-times more water is required to grow food than the water used for domestic needs. However, Pakistan Council of Research in Water Resources (PCRWR) warned in 2016 that the country may run dry by 2025. A UNDP (United Nations Development Programme) 2016 report says that the major threat that Pakistan faces today is not terrorism but water scarcity. Pakistan has one of the largest irrigation systems in the world yet it is one of the most inefficient irrigation systems where more than 60 percent of the water is lost due to leakage and seepage and at the field level, due to poor irrigation methods.

Pakistan is rich in natural resources, but unfortunately is led by the dishonest. All these are management issues, which can be tackled easily with good and honest governance. When there was a famine in Madinah, Umar (ra) immediately sent out orders to organize relief efforts. Messages were sent to the Walis of Egypt and Syria to send food. He personally engaged in the efforts and organization until the matter was resolved. There is a saying of Umar bin al-Khattab that reflects the extent of the responsibility he understood that as the ruler he was accountable for, “If an animal, in the land of Iraq trips, I would be afraid that Allah would account me, for not fixing the road for it.” This shows that a true Muslim leader fears Allah and the idea of negligence is not known to him.

The only real solution is to have a Khilafah (Caliphate) established on the pattern of the Holy Prophet (PBUH), will be quicker to seek a solution in improving water efficiency, and food production, instead of advising the Ummah to not have many children. The Khalifah will also tackle the problem of hunger by making efficient provision for the needy citizens’ welfare, rather than trying to force people into having fewer children.

“There is no governor/wali who takes charge of Muslims and dies cheating them, except that Allah prohibits him paradise.”(Bukhari)