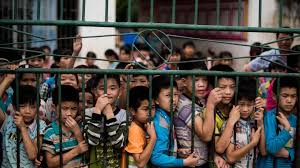 A newly-released report on China’s “left-behind children” said that nearly one-third of rural students were left behind by their parents, with eight percent claiming that their parents’ death had no effect on them. More than half of rural children see their migrant worker parents less than twice a year, according to the Chinese Left-behind Children’s Psychological Conditions White Paper sent to the Global Times on Monday 24th July by the On the Road to School, an NGO which provides financial and psychological help to left-behind children.

Last year, according to the All-China Women’s Federation, an official body, and UNICEF, the UN agency for children, 61 million children in China the age of 17 have been left in rural areas while one or both parents migrate for work. Over 30 million boys and girls, some as young as four, live in state boarding schools in villages, far from parents and often away from grandparents or guardian. Another 36 million children have migrated with their families to cities, but their parents are often too busy to look after them properly.

Comment:
Dehumanization always becomes a disastrous social cost for capitalistic economic growth. In the midst of massive industrialization and expansive China economics abroad to build its Silk Road ambition, this country abandoned its own future generations by forcing millions of parents to migrate for work. This phenomenon also accompanies with growing numbers of single Chinese women who believe marriage is not necessary to live happy lives. China’s unmarried population touched a whopping 200 million.

China also deserves to be called a children-unfriendly country. Its controversial of one-child policy for decades even hostile and inhibits the birth of its own future generation because its view that the large population is an economic burden. Although today the policy has been revised, China remains to have poor vision of children and future generations.

It is the bitter fruit of a materialistic capitalist ideology that views the solution of all problems from an economic perspective and ignores the social impact of its policies on the lives of children, families and society as a whole. The results of a study by a Professor from Beijing Normal University, Li Yifei (2015), even stated that child trafficking, sexual violence, suicide, crime, and other social diseases are very high rate for these “left-behind” children.

Before an empire collapses, it first erodes from within. The collapse may appear sudden, but the processes of internal rot hollowed out the resilience and vitality of the empire before its final implosion. China’s demographic time bomb continues ticking awaits its death; until it’s no longer have control for social damages as a heavy price of economic progress they sought. This is actually the essence of man-made systems, that are being deprived from divine guidance and doom of humanity to different experiments and adventures. China definitely needs to learn from Islam before its falling. Remember Allah (swt) has said:

“As for the one who disregards My message, he will have a miserable life, and we resurrect him, on the Day of resurrection, blind.”