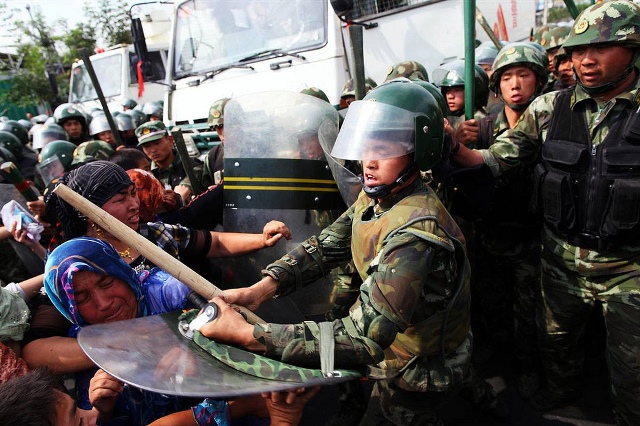 Chinese media reported that last week a group of Uyghur Muslim women wearing the Niqab were taken away by armed police in the Henan province of China which is 3000 km away from the Xinjiang province where the highest concentration of Muslims in the country live. These arrests follow the repressive Chinese government’s banning of the Niqab in Urumqi, the capital of Xinjiang this January, which they justified under the false label of fighting terrorism. It is clear therefore that China is extending its campaign against Islam and Muslims to include provinces on the mainland like Henan province. This latest incident simply adds to the ongoing oppression of the despotic Chinese regime against Muslim Uyghur women – which includes preventing them from fasting, banning those who wear the Islamic dress from riding public buses, and subjecting Muslim women to forced abortions.

These arrests come at a time when the desperate Chinese government is seeking US help against the Muslims of Xinjiang. Reuters and South China Morning Post reported on the 5th August that China has appealed for US support in fighting Islamist militants in Xinjiang, under the pretext that they are also a threat to the United States, following a meeting between Vice Foreign Minister Cheng Guoping and Tina Kaidanow, Ambassador-At-Large for the US State Department’s Bureau of Counterterrorism. The ministry said, “China stressed the serious threat of East Turkestan terror organisations to China, the United States and the international community and requested that the United States vigorously support and coordinate with China in combating the efforts of East Turkestan terrorism forces.” Both sides agreed to combat violent extremism and strengthen anti-terrorism intelligence.

The Chinese government is desperate to hinder the development of Islam in East Turkistan, as observed by the embarrassing open apprehension towards harmless Uyghur women only because they are wearing a Niqab. China is also shamelessly begging for help from the United States in executing its campaign of terror against the innocent Uyghur Muslims. The reality today is that China and the US have united and cooperated together in targeting Muslims in Xinjiang. It reflects how both powers view Islam as their common enemy. Therefore, such confirmation highlights that in the world today, there is a battle between only two ideological opponents – that is Islam verses kufr (both Capitalism and Socialism) which are currently represented by China and the United States. This battle however is very imbalanced because the ideology of Islam is not carried by a state institution since the Islamic Khilafah was demolished by the British in 1924. So re-establishing the Khilafah based upon the method of the Prophethood is essential for Muslims to win this great battle against the ideology of capitalism and socialism/communism.

Our dear Uyghur sisters! Be patient with the relentless repression and accumulating pressures from these duel tyrant regimes to leave your blessed Deen! The dawn of the Khilafah is very near and we are one Ummah, we belong to one Deen, our Prophet is one, our Qur’an is one, our flag (Rayah) is one, and our struggle is one. It is the Khilafah state alone that will liberate the oppressed in East Turkistan lands and enable you to live by all the Commands of Allah سبحانه وتعالى, including guaranteeing you the right to wear your khimar with complete honour and under the protection of the State.