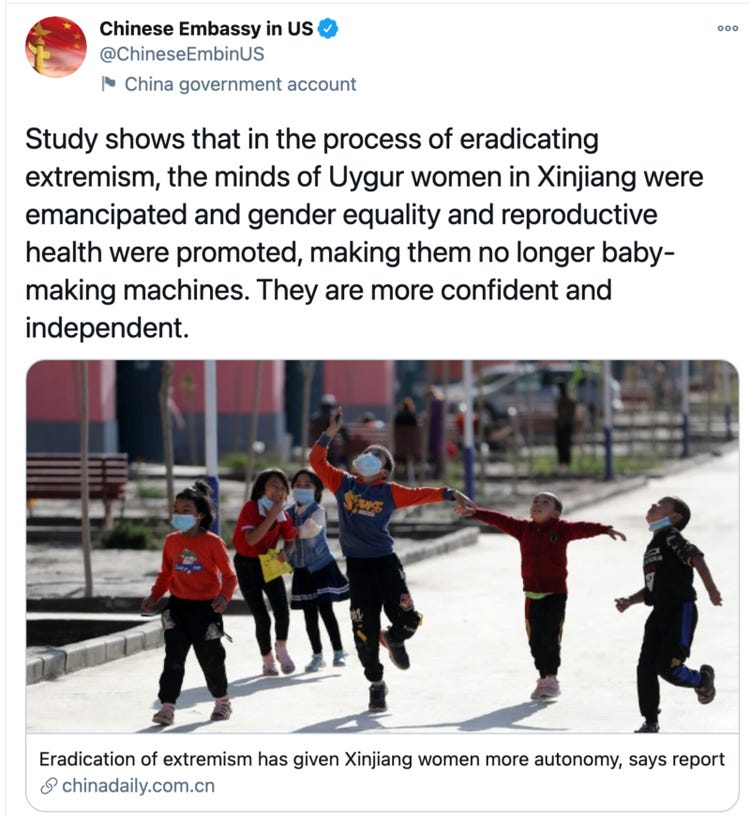 On the 7th of January2021, Twitter of the PRC Embassy in the United States published a post advertising the camps for the so-called “re-education” of Uyghur Muslims.

The publication included a link to a relevant promotional article from the official Chinese press with the following foreword: “Study shows that in the process of eradicating extremism, the minds of Uygur women in Xinjiang were emancipated and gender equality and reproductive health were promoted, making them no longer baby-making machines. They are more confident and independent“.

Many experts were perplexed about such an absurd publication; some of them made the assumption that perhaps the publication was connected with the day of the final confirmation of Biden’s victory in the presidential election in the United States, and hence the defeat of Trump, who throughout his presidential term constantly reproached the PRC authorities with the presence of concentration camps for the Uighurs.

Recall that the Uyghurs have been subjected to the most severe repression and pressure in the territory of East Turkestan occupied by the China for decades – the Chinese imprison millions of them, forcibly marry the Uyghur girls to the Chinese men, and even settle the Chinese men into the Uyghur families.

As for the United States, the Uyghur theme has traditionally been used by them (and long before Trump’s presidency) solely for the purpose of putting pressure on China, using the crimes it is committing in the XUAR to exert international pressure on it, as well as for imposing economic sanctions against China, which becomes weighty arguments in a trade war. And it is obvious to anyone that the Americans do not feel any sympathy for the Uighurs at all, although they express their endless “concerns”.