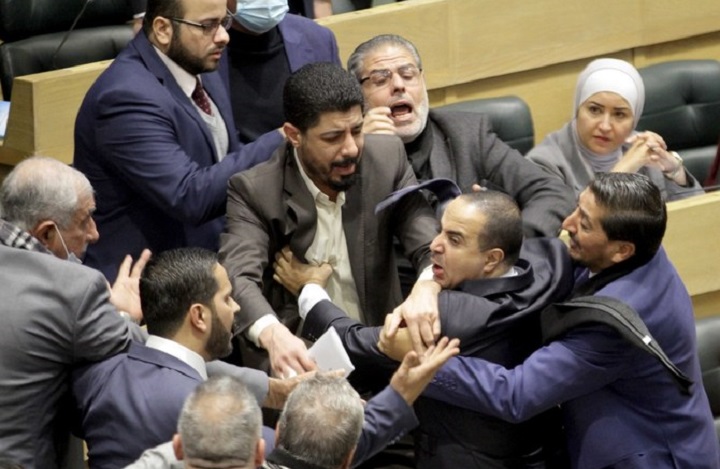 The colonial Kuffar did not leave the Muslim countries before guaranteeing two things that would enable them to control and influence the capabilities and decisions of every entity they created; the puppet regimes loyal to them, and secular systems that exclude the rulings of Islam from everything related to the systems of life, and went even beyond that to matters related to the beliefs of Islam.

Among these kaffir systems is the so-called democratic system, i.e., putting the rule and the constitution in the hands of the people instead of the rule of Allah (swt),

And made this the role of parliaments representing the people, on the surface, and imposed it, a distorted metamorphosis, with electoral systems that bring representatives of the people who are from the same the illegitimate regime that the kaffir colonizer imposed on the people to serve it and beautify its ugly deeds and agree to its humiliating and treacherous agreements with the enemies and his originally invalid constitutional amendments in proportion to the permanence of his existence in governance as it happens in our countries.

What happened in the House of Representatives yesterday, and was repeated before that, of quarrels, verbal abuse, insults and attacks by the so-called representatives of the Ummah during the session of the so-called constitutional amendments related to elections, parties and political action, which indicates definitive evidence of the sterility, corruption and contradiction of human legislation. It also indicates the regime’s attempt, and its maneuvering devices to pass the projects that the regime wants, whether by choosing the head of the Council or the heads of committees, especially legal ones, or the representatives themselves.

O People… O our People in Jordan: What is happening in the country has nothing to do with taking care of your affairs. You are all aware, and praise be to Allah, of the tricks of the regime with its governments, parliament and men, to achieve the interests of the Jewish state and the kaffir colonial West, America and Britain behind it, and all that is going on from foreign policy that falls within the framework of the liquidating American solution to the Palestine issue, as happened in the tripartite meeting of the Foreign Ministry and the Jordanian, Egyptian and Palestinian intelligence two days ago.

As for the internal aspect, and with regard to the alleged political action of radical changes in the constitution, it is a response to colonial dictates and the counter-colonial measures undertaken by the regime to save its survival in power. As for looking after your affairs, poverty, indebtedness, unemployment, and attack on the values of your belief, such as gender, women’s rights, and the Abrahamic and secular system that it promotes, are present before your eyes on the daily media platforms.

O Muslims: With the current situation that most of you have become aware of, and those who want to bring change, including representatives, politicians, and scholars, it is not useful to stand by and watch or describe the disease and ignore the cure, or think that change is by engaging in the regime’s games with what is called political reform, or restoring the man-made constitution with amendments that are pointless. The real change that creates a different reality, that restores the Ummah’s glory, dignity, and a decent living in it, eliminates the Jewish entity and removes the kaffir Western colonizers, is your serious and sincere work to restore the implementation of Islam internally and externally under an Islamic state, a Khilafah Rashidah (rightly-guided Caliphate) on the method of prophethood, and standing by the workers to achieve of the promise of Allah (swt) and the glad tidings of His Messenger (saw).