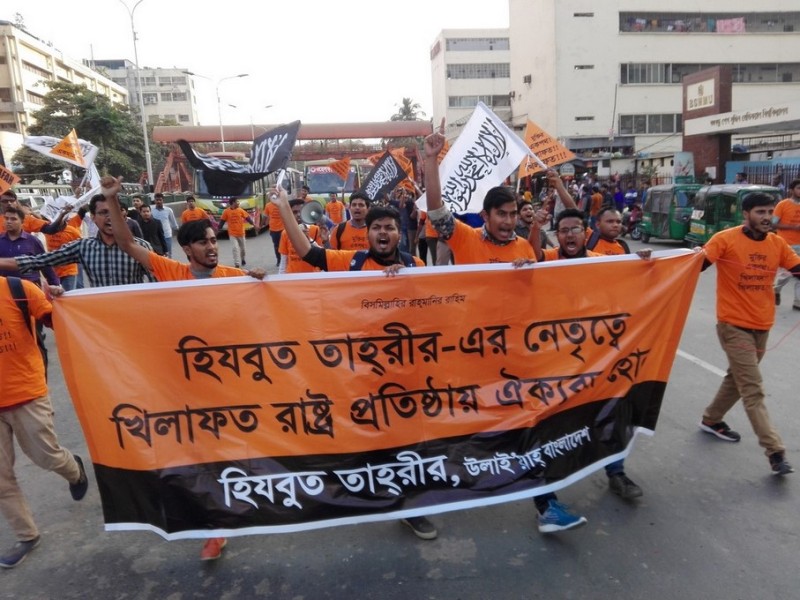 O Muslims! Demand from the Sincere Military Officers to remove the Tyrant Hasina and Transfer Authority (by giving Nusrah) to Hizb ut Tahrir to reestablish the Khilafah Rashidah

Another ‘National Election’, a festival of deception in the so-called democratic system, was held in Bangladesh by creating a curfew-like situation in an atmosphere of intimidation and fear, by keeping the people hostage, shutting down internet and public transports, etc. And unfortunately, in this festival of deception more than a dozen of lives was taken. In the hopes of getting a share in the ruling, BNP ruling elites set out to legitimize Hasina’s tyrannical ruling and called the people through deceitful slogans like ‘voting war’, ‘voting revolution’, etc., but at the end were themselves deceived by Hasina and her masters. It has become evident to the people that in the so-called democratic system, election is just ‘eyewash’, because the Kafir Imperialists and their agent ruling elites decide beforehand by negotiation amongst themselves who are going to be in power. And it has also been proven that there is no practical method other than nusrah to remove this tyrannical rule, i.e., the people must demand from the sincere military officers that they remove tyrant Hasina and transfer authority (by giving nusrah) to Hizb ut Tahrir for the re-establishment of the Khilafah Rashidah (rightly guided Caliphate).

Allah (swt) says, وَلَا تَهِنُوا وَلَا تَحْزَنُوا وَأَنْتُمُ الْأَعْلَوْنَ إِنْ كُنْتُمْ مُؤْمِنِينَ “So do not weaken and do not grieve, and you will be superior if you are [true] believers” [Surah: Aal-i-Imraan: 139]. We, from Hizb ut Tahrir, would remind you again that as a believer it is the responsibility to your Imaan to march forth in the activities for reestablishing the Khilafah Rashidah, the only way of liberation for us chosen by Allah (swt). So, we urge you to continue the following activities in order to remove this tyrannical rule and reestablish the Khilafah Rashidah:

– Make the rule of justice of the Khilafah the center point of discussion within your family and office, and in the social and political arena. Actively participate in the activities of Hizb ut Tahrir to establish as a strong public opinion that the Khilafah is the only solution.

– Demand from the sincere military officers that they remove Hasina and transfer authority (by giving nusrah) to Hizb ut Tahrir to reestablish the Khilafah Rasidah. This is the method of RasulAllah ﷺ ordained for us. You are aware that when the public opinion for Islam was established in the Arabian Peninsula, RasulAllah ﷺ presented himself to the tribes who had military power in Makka and its surrounding areas and asked for security and authority (Nusrah) to establish the Islamic state. Then, the Aws and Khazraj of Medina i.e. the Ansar (ra.), responded to the call of RasulAllah ﷺ and under the leadership of Saad ibn Muadh (ra.), they (ra.) established RasulAllah ﷺ in authority in Medina.

O Sincere Officers of the Military!

People are unified in the demand for the end of Hasina’s rule of tyranny, they are looking up to you that you will remove the tyrant Hasina and transfer the authority to Hizb ut Tahrir to reestablish the Khilafah, because only you have the military capability. Your responsibility is to stand on the side of Islam and the people, and not to protect the tyrant Hasina. March forth to be the like of Saad ibn Muadh, who was honored by Allah (swt) with great honor for giving Nusrah to RasulAllah ﷺ. RasulAllah ﷺ said: «اهْتَزَّ عَرْشُ الرَّحْمَنِ لِمَوْتِ سَعْدِ بْنِ مُعَاذٍ» “This (i.e. Saad ibn Muadh) is the one at whose death the Throne (of Allah) shook, the gates of Heaven were opened for him and seventy thousand angels attended his funeral,…” [Sunan An-Nasai]