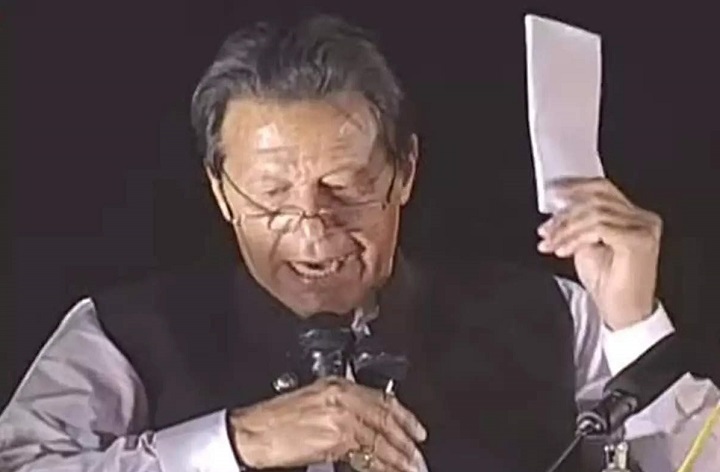 Prime Minister Imran Khan on Thursday lifted the lid on the threatening letter and said it ‘came from the US’. (The News)

Comment:
At the climax of the vote of no confidence musical chair, Imran Khan (IK) showed a latter while addressing the people of Pakistan and termed the content of that letter a naked interference in the affairs of an independent country which is unacceptable and said this would be taken up with the country concerned and strongly protested.

Until this point when the Thorne of IKs government were about to shaken no foreign interference was sensed. As all previous governments, IK went to the IMF program to bring Pakistan under the iron fist of a US colonial institute results in high inflation that broke the backs of people of Pakistan. There was no foreign was observed when Abhinandan was released under the orders of uncle Sam straight after he was cross our borders with the intention of killing our innocent Muslims no interference was sensed by sacked premier. Pakistan under his reign served the US interest in Afghanistan, Pakistan normalized the relationship with India at the expense of Pakistan integrity not only that in serving US, the rulers were also ready to serve US foreign policy in CA no US interference was sensed while serving. For the past 20 odd years Pakistan’s foreign policy revolved around US interest in the region. Previous or newly empowered rulers will be no different in this regard.

PDM since its formation always chants that IK sold out Kashmir now when PDM is in power, will they reverse the situation, will that come out of IMF, will they make the State Bank free from IMF, will the US based foreign policy will be charged??!! Well the answer is no!!!  Everything will remain the same as far as the US is concerned but for the Muslims in Pakistan it will be worsen. They will be forced in a dark hole of inflation, job and food insecurity, because of the common factor and that is this man made Capitalist system which paved the way for elites to work for their interest at the expense of the people’s misery and the country’s integrity and due to its interest based foundation, great powers keep interfering in our matters until we get rid of this rotten system and install the system from heaven i.e. Khilafah (Caliphate).

Only under the shades of Khilafah we will adhere to our own internal and external policy based on the divine laws from the Creator of universe. In this blessed month of Ramadan, we increase our efforts to work for Khilafah and in the blessed nights make dua that this Ramadan will be the last Ramadan without Khilafah.