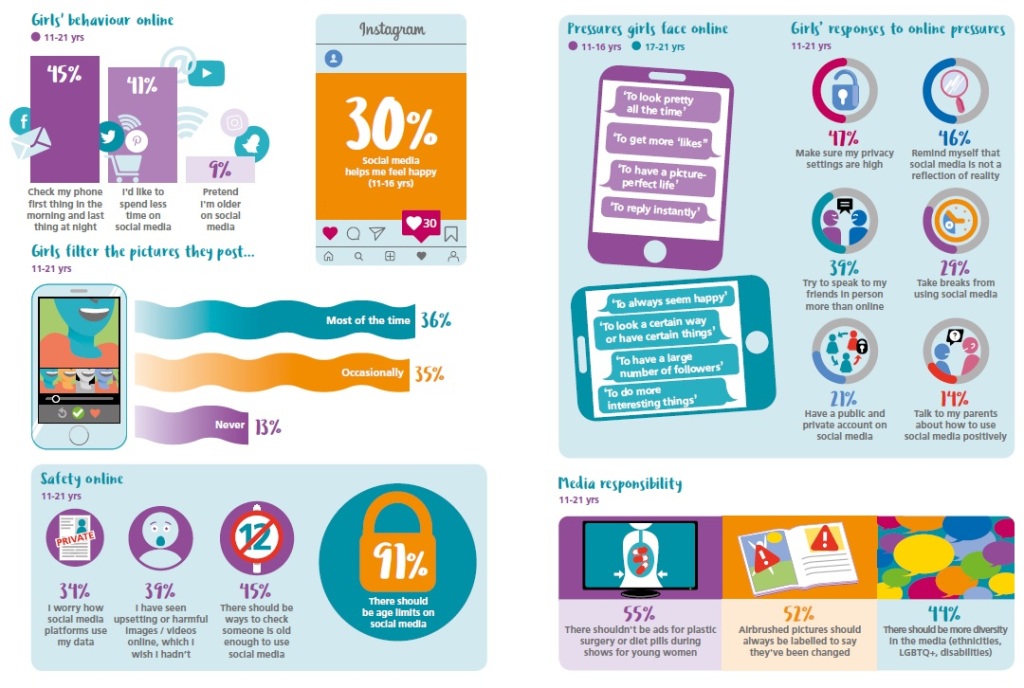 A third of girls and young women will not post selfies online without using a filter or app to change their appearance, while a similar proportion have deleted photos with too few “likes” or comments, research has found. About half regularly alter their photos to enhance their appearance online and “find acceptance”, Girlguiding’s annual Girls’ Attitudes survey found. 44% said that the fear that others would criticise their body stopped them from agreeing to have their picture taken. Eight out of 10 respondents aged 11-21 had considered changing how they looked, with more than half thinking this would improve their confidence or make them feel better about themselves. Three-quarters would like cosmetic procedures, such as lip fillers and Botox.

Increased exposure to unrealistic images of girls and young women, was exacerbating the pressures they faced.

One respondent said: “I find it hard to go through Insta because everyone looks perfect and it lowers my self-confidence.” [The Guardian Newspaper]

Such horrific statistics of the abysmal mental health state that capitalist societies have created are not surprising, as they are the inevitable consequence of the liberal secular ideology. Capitalist societies have no fixed limits; everything is for sale, even girls’ bodies and self-esteem. Sexuality is exploited as a marketing tool, and anxieties and insecurities are manufactured to sell more remedies. The sick secular cycle continues with disregard for its billions of victims worldwide.

Capitalists cannot differentiate between desires and needs, so every lust becomes a necessity as they justify their cruel exploitation of anyone weak enough to be trampled on. In the end, even the perpetrators are left feeling empty with despair, as their material greed neither satiated their lusts, nor contented their soul.

Muslims should feel particularly aggrieved as we see this sorry state of affairs, for we have received the guidance of the Lord of the Worlds, who gave men and women distinct roles in society, defined how they interact with each other, and explained in detail what is allowed to be exploited for profit, and what is not. Islam emphasised the family unit as a source of strength for our young people, while capitalists try to pull the vulnerable away from their families, making them easy prey for their nefarious schemes. Men and women are to be respected for their character, not merely their physical attributes.

Yet where is the Islamic example today, to guide the misguided who suffer under capitalist hegemony? Where is the shining example of the Islamic society which is free from such anxieties and pressures, leading to a tranquility of its citizens that the secularist cannot even imagine?

Without the Khilafah (Caliphate) on the way of the Prophethood that has been promised to return, the capitalists will continue to exploit and the world becomes more and more miserable. May Allah hasten it’s return soon.