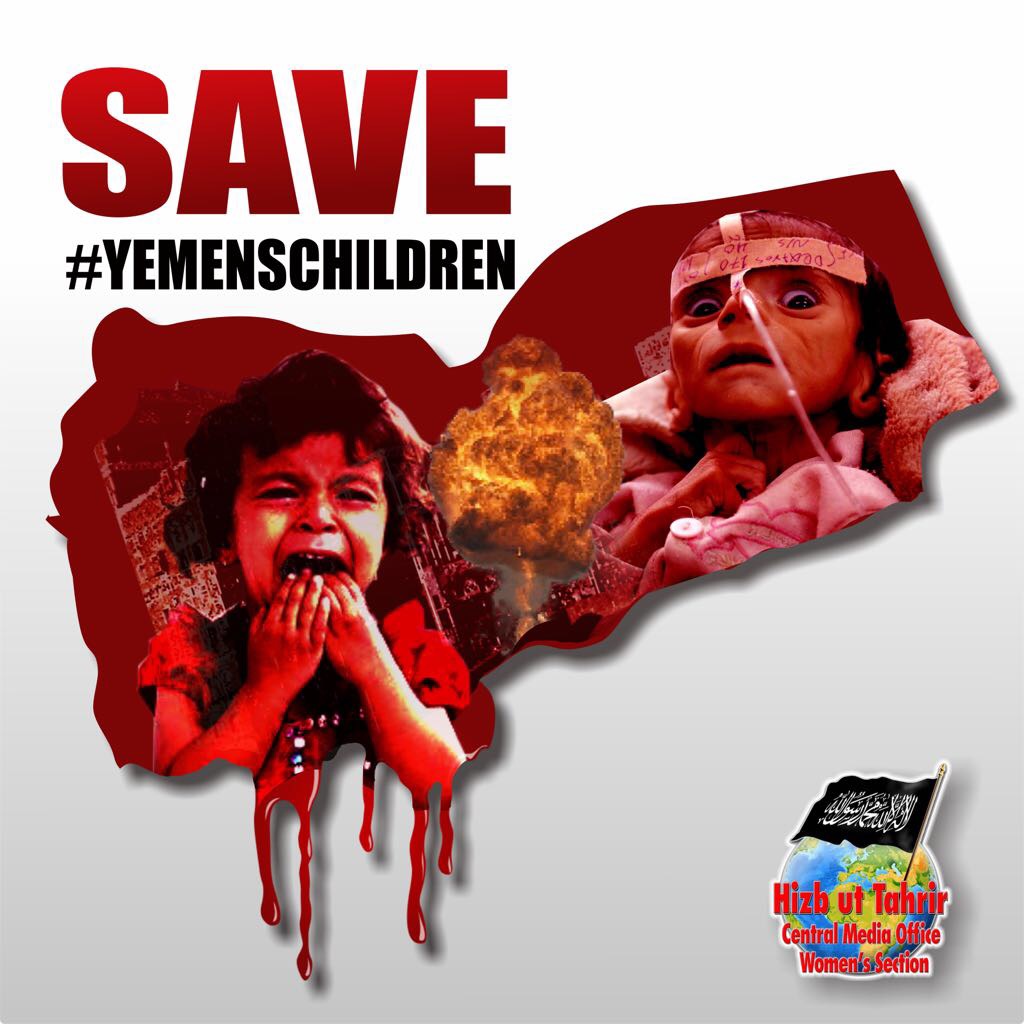 The Women’s Section in the Central Media Office of Hizb ut Tahrir have launched a campaign to bring international attention to the heartbreaking plight of the millions of children of Yemen who face a horrifying humanitarian crisis due to the ongoing brutal war in their country. For over 2 years now, the innocent children of Yemen have been the primary victims of a war that has sown utter devastation on the lives of its people. Infact this humanitarian catastrophe has been termed, “a children’s crisis” by aid agencies due to the overwhelming impact the conflict has had on the young.

According to the UN, 80% of children in Yemen are now in desperate need of humanitarian aid. The crippling air and sea blockade by the Saudi-led coalition, and the fighting between the warring parties in Yemen’s key ports of Aden and Hudaydah have caused near-famine conditions affecting 17 million people. 2.2 million children are now suffering from acute malnutrition. The war has also caused the collapse of Yemen’s healthcare, water and sanitation systems, leaving 7 million children without adequate medical care, and 8 million children with no access to clean water and sanitation. It has also sparked a deadly cholera epidemic to which the young are most susceptible. Of the 425,000 suspected cases of cholera across Yemen, around half are suspected to be children, and of the 2000 who have died from this preventable disease, a quarter have been children. According to Save the Children, the children of Yemen are being infected by cholera at a rate of 1 every 35 seconds, and according to UNICEF, every 10 minutes a child under 5 in Yemen dies from preventable causes. On July 26th, the World Health Organisation, the UN Children’s Fund, and the World Food Programme issued a joint statement describing the situation in Yemen as “the world’s worst cholera outbreak in the midst of the world’s largest humanitarian crisis”. All this is in addition to the 4000 children who have been killed or injured directly by the fighting. Despite all this, there is no end in sight for this brutal war.

This campaign will also expose how this war is not a sectarianism-driven conflict, nor a battle against terrorism, nor is it only a military struggle between regional powers for their selfish nationalistic political ambitions. Rather, it is a colonial-driven proxy war between Britain and the US, who are not only profiteering from the bloodshed but also fueling the war through their various agents in the region to gain greater influence in this strategic country. The pure blood of the children of Yemen has therefore been sacrificed to feed the selfish interests of these tools of the conflict and their masters in Britain and the US, and the morally bankrupt arms industry who view the slaughter, starvation and colossal scale of suffering of Yemen’s children as an acceptable price for financial and political gains. These gains, explains why the capitalist Western governments and the rest of the international community lack any political will to end this devastating war, and why the mainstream media coverage of this conflict has been minimal, and hence why this has become “the forgotten war”!

The campaign will demand an end to this war of Muslim killing his Muslim brother which is utterly condemned in Islam. And it will raise a call to the Muslims, and their Ulema and armies to establish with urgency the Khilafah (Caliphate) based upon the method of the Prophethood. It is this state alone that can end colonial interference in our lands, stop sectarianism being used as a tool for political interests, remove the artificial borders which divide this Ummah and end any rifts between the hearts of the believers caused by decades of nationalistic secular rule. Finally, the campaign will present the prosperous, secure and stable history that the land of Yemen enjoyed under the Islamic rule of the Khilafah, and how this glorious state will solve the current and long-standing problems affecting Yemen’s children and their families. We call you to support this important campaign which can be followed at: