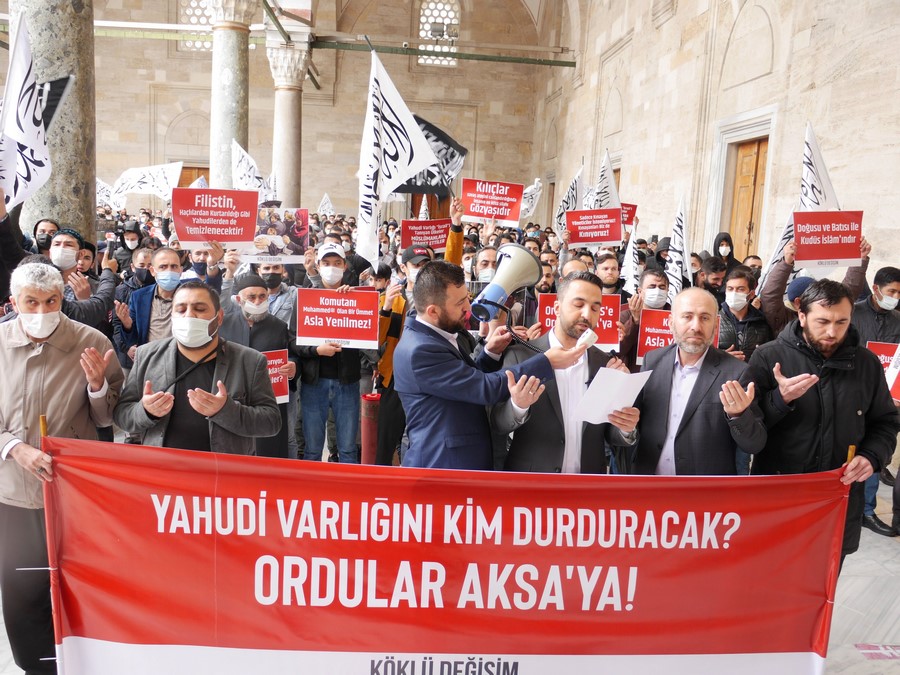 The acts of looting and usurpation that the occupying Jewish entity began in the Sheikh Jarrah neighbourhood in Jerusalem [al-Quds] at the beginning of the month of Ramadan, then turned into mass massacres. As a result of this assault on innocent civilians in Jerusalem and Gaza with shells and bombs, 248 martyrs were killed, including 66 children and 39 women. In addition, our Palestinian brothers and sisters, who have already lived in an open prison for 75 years due to the occupation and siege, spent Eid Al Fitr under bombardment. Likewise, the Netanyahu government, which sees nothing wrong with setting fires in al-Quds for the sake of its own political future, has continued its attacks, although it stated its agreement to the ceasefire. However, what makes the occupying entity, which has never fulfilled its promise until today, so arrogant, is that there are no responsible leaders to stop it from transgressing, because the rulers of the Islamic countries only condemn them and raise the issue to the United Nations! As for the defenders of the Muslim rights, they have gathered in the squares to support the Palestinian people, whether in Turkey or around the world, calling on the rulers and armies to end the occupation.

And we, in Hizb ut Tahrir / Wilayah of Turkey, on May 21, after Friday prayers in 21 different cities in Turkey, performed the funeral prayer of the absent for the sake of our Muslim brothers and sisters, the martyrs of Palestine. We also cursed the occupying Jewish entity, made press statements, and prayed for the rights of the oppressed Muslims in general and in Palestine in particular. Muslims also participated in these activities that we organized in squares and mosques in Istanbul, Ankara and Adana, Bursa, Adiyaman, Şanlıurfa, Siverek, Gaziantep, Marash (Kahramanmaraş), Diyarbakir, Ergani, Hatay, Mersin, Antalya, Bitlis / Tatvan, Van, Konya, Kerman, Aksaray, Izmir, Aydin and Yalova.

In these press releases, we said that the world has witnessed two occurrences during this period. The first promising occurrence is the “epic resistance of the Palestinian people, who sacrificed their most precious and valuable to defend Al-Aqsa Mosque and al-Quds. Those who defended with stones and sticks and resisted the Jewish usurpers who attacked them with advanced weapons. It was a fierce resistance that surprised the Jewish soldiers and settlers who did not know what to do and what kind of return they will be returned”. The second compelling matter that the whole world witnessed is the fact that the Muslim rulers, especially Arabs, are entering the race of condemnation and disapproval. “These helpless rulers, who for years have done nothing but condemnation and disapproval, have once again done what is expected of them and only condemned. While the leaders of many countries including Turkey are making statements of “strong condemnation”, so has the Organization of the Islamic Cooperation, which is made up of 57 countries announced their condemnation of the Jewish entity in the strongest terms.

We extend our gratitude and supplication, with the grace of Allah, for all the Muslims who participated with us in performing the funeral prayer of the absent for the sake of our Muslim brothers, the martyrs of Palestine, and cursing the entity of the Jewish occupiers, and the coverage by the press.