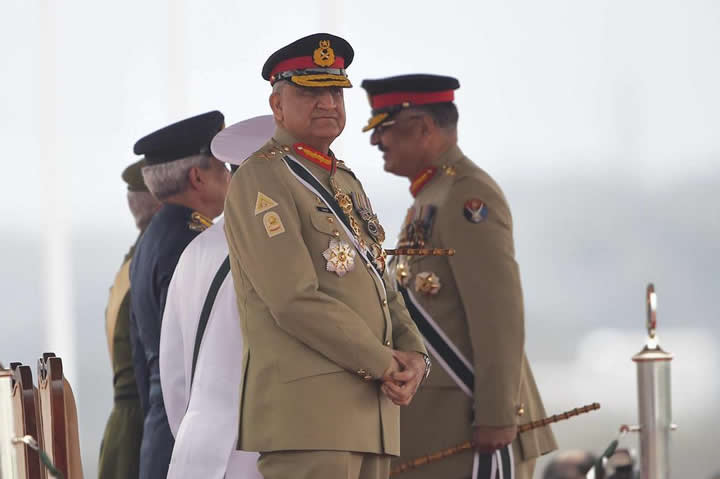 The terms and conditions of Bajwa’s tenure extension have been surfacing one after the other in a shameful manner, essentially compromising interests of Muslims of Pakistan.

The first was the forceful implementation of the destructive IMF program in the garb of improving the country’s economic situation. However, in essence it was to safeguard the interest based money lending business of international donors, supervised by the IMF, as well as to ensure Western control over the financial affairs of the country. New financial policies and measures were quickly rolled out to guarantee timely foreign debt payments, at the cost of crippling the local economy, back breaking taxation and price hikes for the general public. This was followed by taking on additional interest based loans to further pile up the debt burden to ensure that the country remains hostage to Western control over our financial matters . All of this was done in clear opposition to the commands of Allah (swt) and His Messenger (saw), who have forbidden interest based money transactions and making of contracts that give non-Muslims control over the affairs of Muslims.

The second was the unstinted support for the US led Afghan reconciliation process, by pressurizing the Afghan Muslims, led by Taliban, to abandon jihad against occupying US and Western forces and for joining the US sponsored Afghan government. The main objective is to ensure perpetual US military presence and control of the region enabling the US to keep a check on the resurgence of the political expression of Islam in the region, as well as to curb increasing Chinese regional influence. This was again done in clear opposition to the commands of Allah (swt) and His Messenger (saw), which demand organizing jihad against occupying non-Muslim forces, whilst forbidding any support to non-Muslims for gaining control over affairs of Muslims.

The third and latest in this series is the abandonment of the Kashmir cause and explicit acceptance of Indian occupation of Jammu and Kashmir. The objective here is to serve the US interest of strangling Chinese regional influence through a low intensity Indian military engagement against China over the Ladakh border. This matter could never materialize without a guarantee from Pakistan’s military leadership that it will not antagonize India over the issue of Jammu and Kashmir. This guarantee finally came in the form of a ceasefire pact at the Line of Control, followed by Bajwa’s recent “Bury the past and move forward” speech at the “Islamabad Security Dialogue,” to officially recognize the Indian move to make occupied Jammu and Kashmir part of the Indian Union. This was once again done in clear opposition to commands of Allah (swt) and His Messenger (saw), which forbid acceptance of non-Muslim occupation of any Muslim Land and abandonment of jihad to protect Muslims against oppression of non-Muslims.

Bajwa has certainly repaid his benefactors who helped him secure an extension in his tenure, by making all efforts to deliver as per his commitment. However, he is surely violating the oath and promise he gave in the name of Allah (swt) when he was commissioned at the Pakistan Military Academy. A solemn promise to remain loyal to Allah Almighty and to serve Allah’s commands and to protect the interests of Muslims and his country. While Bajwa through his actions has forsaken his oath, the bulk of the military, comprising of troops and regimental officer ranks, is absolutely clear as to why they signed up for military service in the first place. For them, Jammu and Kashmir are their jugular vein. For them the people living in Jammu and Kashmir are their own people, their brothers and their sisters in Imaan. Their brothers in arms have embraced martyrdom while fighting for the Kashmir cause starting from the early days of 1948 till today. They clearly recognize India as their enemy for being an oppressive occupying force. They have fought multiple wars and skirmishes with the Hindu State. For them the notion of “bury the past and move forward” is synonymous to defying their conscience and identity and wasting all their past sacrifices.

Bajwa’s U-turn on the Kashmir issue and his neglect of the immense sacrifices of military men in the Kashmir cause and his shameful acceptance of the Indian occupation of Kashmir may serve the US regional interest. Bajwa may also win the apparent support of the military leadership, by ruthlessly exploiting the military institutional discipline and chain of command. However, this will weaken the institution of the military by creating a deep fracture between the military leadership and its rank and file on the issue of Kashmir. The military men in Pakistan Army’s rank and file cannot forget the sacrifices they have given through sweat and blood for the Kashmir cause. They cannot forget or ignore the suffering of Kashmiri Muslims due to continuous oppression of Indian security forces. They cannot forget the precious lives, both civilian and military, lost due to continuous Indian firing across the Line of Control. Even though they temporarily show restraint out of military discipline and code of conduct, in their hearts they feel immense pain for their Kashmiri brothers and sisters who have been left helpless at the mercy of oppressive Indian security forces. For them, the empty speeches on solidarity with Kashmir by those in authority and the release of ISPR songs simply add insult to injury. They have been giving sacrifices in the past for the liberation of Kashmir and even today they wait impatiently for a capable military leadership to lead them in their march towards Srinagar. They dream of the day when they will liberate Kashmir and raise the flag of “There is no god but Allah (swt) and Muhammad (saw) is His Messenger” across the length and breadth of Kashmir.

The sincere officers in the military leadership who fear accountability by Allah (swt) on the Day of Judgment must realize that it is the existing nation state framework and the evil network of international financial and security institutions, led and managed by the West, which is keeping them subjugated and their capabilities compromised. Rather than getting poisoned by the Westphalian and similar pro-Western concepts, it is time to reject the fraud called democracy and embrace the Islamic political system, the Khilafah. The Khilafah State (Caliphate) raised the Muslims to the position of the leading global power in the past and it will be the Khilafah State once again that will raise us to the same position.