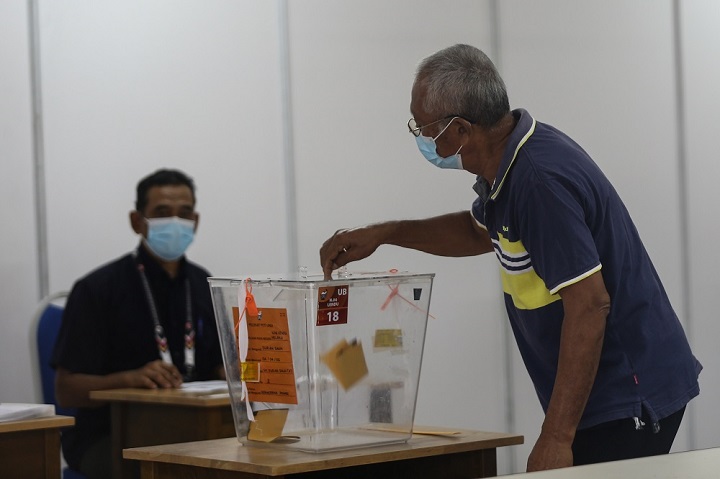 The 2021 Malacca state election was held on the 20th of November 2021. This election was called prematurely due to a ‘political crisis’ which came about when four assembly members casted a no confidence vote against the incumbent Chief Minster, Sulaiman Md Ali and withdrew their support for him. The election was a contest between Barisan Nasional (BN) and Perikatan Nasional (PN) coalitions after UMNO (component party of BN) stated that it would not cooperate with Perikatan Nasional in it. There have been rumours of calls to boycott the election, disagreeing that the election be held when Malacca has just ‘heaved a sigh of relief’ after moving to Phase Four of the National Recovery Plan (PPN).

Comment:
The election process in democracy is based on the basic philosophy of secularism – to separate religion from life. Democracy is a blasphemous system of government that originates in the West and its basis is diametrically opposed to that of Islam. When this is pointed out, many will contend that if we boycott the state election, we are threatening the process of democratically electing Muslim leaders and it is only the kuffar that will benefit from this. To make this point clear, we need to first understand the basis upon which democracy is built. It is built on freedom– freedom to choose a leader, freedom to boycott the election, freedom to implement any form of laws and regulations on the people… it’s basically freedom to do almost anything so long that this freedom forms the basis of the ideology! It is a system which is independent of the creed of the person implementing its rules and laws, hence, it is really a strange perception to even think that democracy can act as a platform for a sincere Muslim to implement Islam!!! It is exactly this ‘freedom’ that allows anyone to challenge the authority of Islam and forces sincere Muslims who have trust in democracy, to concede and compromise. If a person boycotts the state election on health basis, then he/she is still holding on the perception described above. However, if the boycott is based on the understanding that democratic elections are fundamentally opposed to Islam or that the election process is a way for human beings to take on Allah (swt)’s right as The Musharri’ (Lawmaker), then he/she is on the right path. Islam is indeed a threat to democracy.

Consequently, what is said to be a threat to democracy is not the boycott, but Islam itself. If Islam is implemented in its totality by the Ummah, not just in governance, democracy will surely be wiped out. It is due to this that the West is very afraid of the rise of Islam and worried when it sees that Muslims are beginning to evaluate their actions based on Islamic law, because they, the kuffar, knows that when this happens, democracy is on its death bed. Muslims should realize that it is not the act of participating in an election that is the cause of haram, but it is the basis upon which the act is established – democracy – which renders it haram. The principle upon which the elections are based upon in a democratic system is that the sovereignty belongs to the people. In this aspect, the people don’t only have the right to elect rulers, but also the right to make laws via these elected rulers. Clearly this is contrary to Islam where the sovereignty lies in the Shariah. Furthermore, elections act as a method (tariqah) in the democratic system whereas in the Islamic system, elections is only a way/means to elect representatives to the Regional Council and the Ummah Council (Shura Council) to account and give input to the Caliph.

Elections form a set of tools for democracy to ensure that secularism lives on. It is one of the main measures to ensure that Islam will never be implemented. It gives the illusion that Islam could possibly be applied but just like a mirage, it will leave sincere Muslims who put trust to this wretched system forever disheartened and disillusioned.