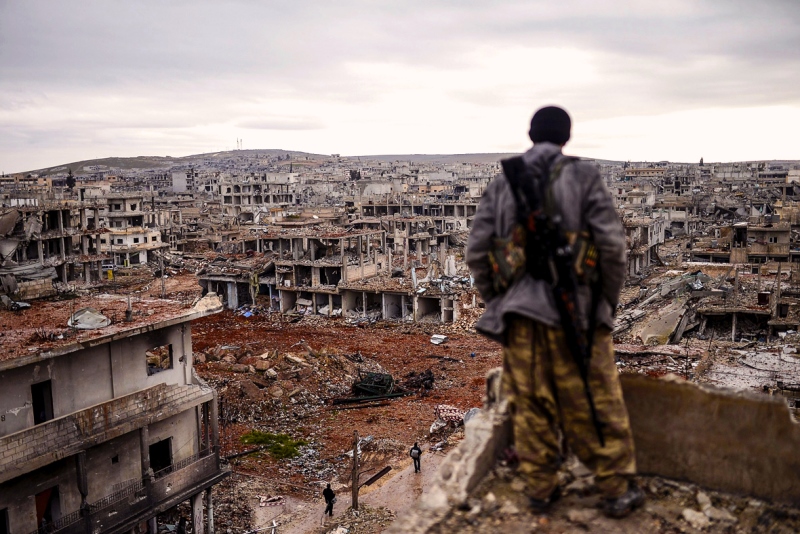 Strategic Estimate is Khilafah.com’s annual assessment of the global balance of power. In our assessment of 2015, we concluded with the US remaining the world superpower and navigating the myriad of challenges it faced across the world.

The uprising in Syria past its fifth anniversary in 2016 and in early 2017 it will reach its sixth. No one could have predicted during the historic days when the Syrian masses took to the streets in 2011, that the conflict would have lasted so long. The fall of Aleppo in December 2016 struck a severe blow to the rebel groups of removing the Bashar al-Assad regime. In what is the regimes biggest success to date and the rebels biggest loss it looks as though the beginning of the end has started. The United States political plan for the country looks to be as elusive as ever after numerous conferences, negotiations and ceasefires. As Obama’s term at the White House comes to an end, America’s political plan for Syria struggled to come to fruition throughout 2016. In Strategic Estimate 2017, we assess where matters stand in Syria.

The US has persisted in shaping conflicts within Ukraine, Libya and in the South China Seas, albeit with mixed success; we assess what this means for America’s position as the global hegemon. Particularly with a new president to take up his post in the White House in early 2017.
In 2016, a political bomb exploded in Europe as the United Kingdom narrowly voted to leave the European Union. The EU has been a divisive issue ever since Britain joined the European Economic Community (EEC) in 1973 and calls for renegotiating Britain’s membership had been gaining ground ever since. The decision came at a critical moment for the UK, as it stands at a serious epoch in terms of its position within the world. Strategic Estimate 2017 will analyse what this result means for Britain and its role in the world.

Russia’s entry into Syria passed its first anniversary in September 2016 and has turned the tables in the favour of Bashar al-Assad but questions still remain unanswered – does Russia have any grand aims in shaping the country and the region or is it part of the US plan in ensuring real change does not take place within the country? The conflict in Ukraine continued to hurt the Russian economy, but a solution remained a distant prospect. Losing Ukraine in 2014 clearly obstructed Russia’s attempts at reconstructing itself as ‘mother Russia,’ whilst the resulting sanctions and sharp decline in oil prices continued to hurt it domestically. The struggle for Ukraine has all but frozen, with neither Russia nor the West able to impose their will against the other. All of this took place with significant NATO movement in Eastern Europe. In Strategic Estimate 2017 we assess where the struggle for Ukraine stands and what this means for Russia.
In 2016 the South China Sea was a regular feature in global headlines and with the international tribunal in the Hague ruling, which rejected China’s claim to the rocks and islands within its vicinity, heightening the tension in the overall region. In Strategic Estimate 2017 we assess what this means for China’s geopolitical claims. China’s attempts to continue with its colossal economic transformation is struggling as its economy slows and its debt continues to pile up quicker than the economy can generate wealth. China suffered from a severe economic slowdown in 2016, which has once again shown the cracks in China’s economic strategy. We assess the state of China’s economy and the options available to it.

The effects of the global economic crisis continued to weigh on the European Union in 2016, but this was almost insignificant compared to the shock result of Britain voting to leave the EU. For years questions have remained on the long term viability of the Union, this bombshell by Britain has only confirmed the Union’s long term challenges. In Strategic Estimate 2017 we assess the impact of this decision, what it will mean for the wider EU and how the heavyweights (Germany and France) plan to preserve the union.

Successive Strategic Estimates have analysed emerging nations and their prospects of joining the league of elite nations that engage in political struggle. In Strategic Estimate 2017 we assess and analyse Latin America, which regularly appears in global headlines, but formal global struggle over it doesn’t appear to take place. As a result of this, it is one of the least known continents in the world and probably the most misunderstood. In Strategic Estimate 2017 we review the history of the region and where it stands in terms of its position in the world.

What follows in sha allah are the author’s opinion and assessment of 2016 and the trends for 2017 and beyond. Like any assessment, they are estimates and forecasts and are the opinions of the author.