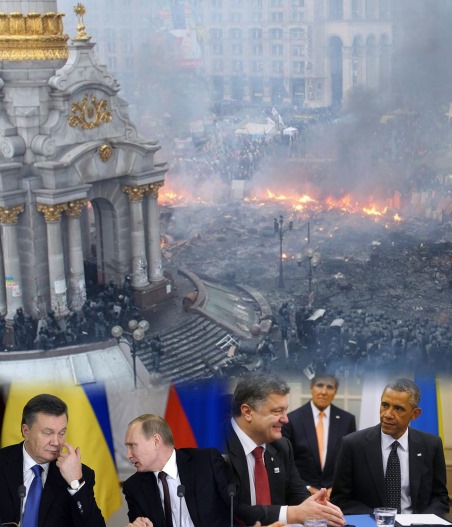 In 2014, a nation on the edge of Europe drew the attention and intervention of the world’s powers. On its anniversary, Ukraine is still being fought for by the EU and the US on one side and Russia on the other side who annexed Ukrainian territory in 2014. In Strategic Estimate 2015 we assess the position of the world’s powers and their attempts to steer Ukraine away from Russia’s clutches.

Russia in 2014 saw the overthrow of the Viktor Yanukovych, someone the Kremlin brought to power in 2010 in order to reverse the 2005 Orange Revolution in Ukraine. A stand-off ensued for all of 2014 with Russia making various moves to counter western attempts to bring Ukraine under Western control. Russia’s ‘Asian’ strategy of reducing both energy and trade dependency upon Europe continued in earnest with the historic deal with China for the export of $400 billion worth of gas from the Russian Far East to China over the next 30 years. The impact of this on Russia’s position in the world and the ramifications of what is taking place Ukraine will be assessed.

The Middle East once again attracted the attention of the world with the crumbing of Iraq, the continuation of the struggle in Syria and the emergence of ISIS in the region. In 2014 the post-Arab spring architecture was laid by the countries that experienced uprisings. With the declaration of Khilafah by ISIS the regions importance once again attracted the attention of the world’s powers. In Strategic Estimate 2014 we asses all these developments.

In Strategic Estimate 2014 the sustainability of China’s rapid economic growth based upon low wages and aggressive exports showed the unmistakable signs that as a model it had run its course. Throughout 2014 China’s leadership initiated the first of many new programs aimed at economic transformation, including an unprecedented anti-corruption drive in the political realm. In Strategic Estimate 2015, we assess the challenges that lay ahead in this colossal restructuring and what the current economic slowdown means for China’s attempt to become a regional power.

As the global economic crisis shows little signs of ending soon this has continued to strain relations between the European Union’s member states as well as relations within a number of states. Both Scotland and Catalonia had referendums in 2014; showing separatist tensions remain a major issue in Europe. Tensions escalated between Germany and France in 2014 as France challenged German leadership in Europe and questioned the German deficit and debt targets. Over the past five years, Germany has used the European crisis to carefully introduce controls on the fiscal systems of EU members but as the economic situation struggles to improve friction between Europe’s powers is growing. Strategic Estimate 2015 will assess the economic situation in Europe and how the policies to overcome these are faring.

In 2014 ‘MINT’ entered the global political lexicon, alongside the BRIC nations. Mexico, Indonesia, Nigeria and Turkey (MINT) became countries considered most likely to assume a place at the high table of economic success and political power. Tipped to follow Brazil, Russia, India and China (BRIC) they are considered to teeter on the cusp of potential greatness. In Strategic Estimate 2015 we assess their political and economic prospects.

What follows inshallah is the author’s opinion and assessment of 2014 and the trends for 2015 and beyond. Like any assessment, they are estimates and forecasts.