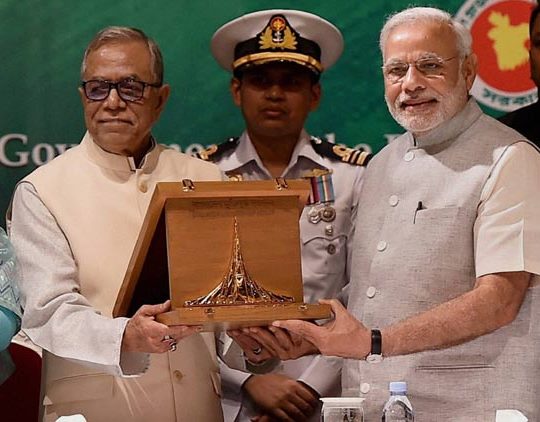 On 06 June, 2015, during the Indian Prime Minister Modi’s visit, Bangladesh-India concluded 22 agreements and memorandums of understanding on issues ranging from “connectivity” and infrastructure to health and education. Media frenzy over Modi’s visit vis-à-vis the imaginary benefits that Bangladesh would receive out of these agreements are in fact nothing but sensationalism over truth. To put matter into perspective, no one apart from the politically naïve ones and sell-outs buy the idea that deals with India will bring us economic wellbeing, whereas the fact of the matter is that India itself is a poverty-ridden country, which miserably failed to resolve her own economic crisis and thus topped world hunger list this year with 194 million people. Hence, why would such a fanatically nationalist country, with her history of animosity towards Bangladesh, be so eager to help us except that she has her own economic and strategic objectives to achieve from Bangladesh? Ravi Shekhar Narain Singh, author of the India-based think tank Observer Research Foundation (ORF) wrote few years back in his book titled, “Asian Strategic and Military Perspective” that the Kolkata-Dhaka-Agartala transit route (which has been inaugurated by Hasina and Modi on Saturday) could enhance economic wellbeing of India’s northeast. Apart from her efforts to strengthen Indian economy, Hasina has also agreed to assist India in exercising her regional geo-political strategic presence in the Bay of Bengal by allowing India to use the Chittagong and Mongla ports.

Let us not forget that India is also virtually sitting on an electricity crisis time bomb with 77 million households using kerosene for lighting. While northern India is still facing over 5,000MW of power shortage, why would she deprive her own citizens of the 4,600MW of power that will be produced by Indian companies here in Bangladesh? The goal of this Mushrik state is not only to make ways for her corporations to profit, rather she also wants to get hold of the strategic energy sectors of Bangladesh. The criminal Hasina has also shown her depth of abysmal treachery by handing over the sensitive strategic energy resources and locations to our enemy state. Not only that, while the belligerent India is conspiring to destroy our RMG sector and has already destroyed our Jute industry, Hasina has shamelessly agreed to give a special economic zone only for Indian companies!

Oh sincere Muslims of Bangladesh! These deals are not matters of mere bilateral relations to seek a win-win situation. Rather it is surrendering of the wealth and resources of the Ummah to the Mushrik state. Traitor Hasina is doing everything in her capacity to bring defeat and humiliation upon the Muslims of Bangladesh. You must join hands with Hizb ut-Tahrir in its struggle to re-establish the Khilafah that will bring an end to these tyrant rulers who seek glory and power from the Mushrikun, and bring India back under Islamic rule.

“Bear unto the hypocrites the tidings that for them there is a painful doom; those who choose disbelievers for their friends instead of believers! Do they look for power at their hands? Lo! All power belongs to Allah.”