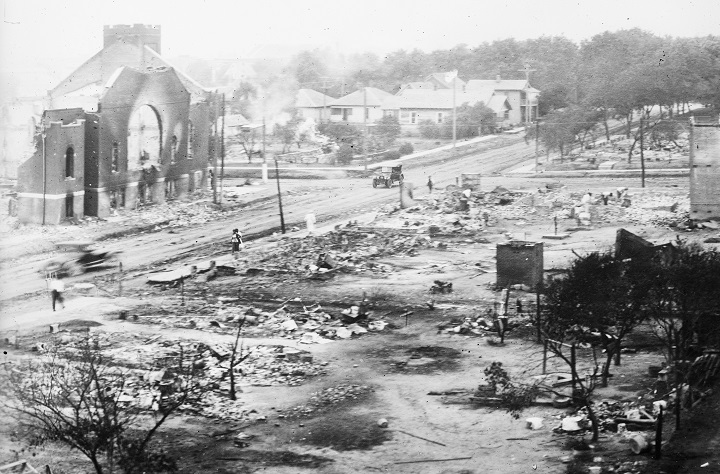 US President Joe Biden wants to clean America’s bad image at home and abroad after taking over from Trump. However, that means addressing the evil legacy of crimes that occurred before Trump came to office and that will continue to blacken America’s internal harmony after Biden leaves. Last week, Biden marked the 100th anniversary of a massacre that systematically destroyed an entire Black community in Tulsa, Oklahoma. The massacre of black people had been erased from the history books, but resurfaced during last year’s ‘Black Lives Matter’ protests that set fires across America after a series of police killings of black men.

In 1921, white mobs attacked a neighborhood of wealthy black Americans in Tulsa, Oklahoma, and burned down black businesses, hotels, banks and more than 1,200 homes. The rampage lasted 2 days. The police deputized about 500 white residents to help round up and arrest all black males to allow the destruction of the black neighborhood to go ahead unopposed. Afterwards, nearly 10,000 people were left homeless and 6,000 were forced into detainment camps, and up to 300 people were killed and their bodies were dumped in mass graves. Last year, America decided to start looking for the graves, and 5 more bodies were discovered after Biden’s speech. “Some injustices are so heinous, so horrific, so grievous, they cannot be buried, no matter how hard people try,” Biden said, and he continued: “Only with truth can come healing. Just because history is silent, it does not mean that it did not take place … hell was unleashed, literal hell was unleashed. We can’t just choose what we want to know, and not what we should know … I come here to help fill the silence, because in silence wounds deepen.”

Congressman Jerrold Nadler, Judiciary Committee chairman, said, “The Tulsa Greenwood massacre can be described as an act of ethnic cleansing, which was subsequently wiped from the history books for many decades.” It is strange that Biden himself did not describe the enslavement, persecution and massacre of black people in America as ethnic cleansing, considering that in April he formally recognized a historical event during the first world war in as a genocide.

The massacre in Tulsa started after a black man was accused falsely of sexually assaulting a white woman. The man was taken into custody and there were threats that he would be hanged (lynched) without any legal trial and judgement, which was very common then – 61 people were hanged without trial that year and most of them were black. As black residents gathered to demand his release, white men gathered to demand he be punished. Then the killing began. Despite the abolition of slavery 60 years before, and throughout the decades of struggle for civil rights that followed and the equality laws in the 1960s and 1970s, black Americans still do not feel equal or safe. History has recorded a phenomenon called “The Great Migration,” which was the migration of 6 million black Americans from the south to the north of the US in order to escape the killings and the racism that were much worse in the southern US states where their grandparents had been slaves.

4,743 lynchings have been documented to have occurred between 1882 and 1968 in the US. The victims were hanged or burned, some had pieces of their bodies chopped off as souvenirs and often the participants and onlookers were so proud of their work that they took photographs to boast of what was done. In one report, “a mob of several hundred… tied Mary’s ankles, hung her upside down from a tree, doused her in gasoline and motor oil and set her on fire. She was still alive when a member of the mob split her abdomen open with a knife. Her unborn child fell to the ground, was stomped and crushed. Mary’s body was riddled with hundreds of bullets.” Mary Turner was black, and her crime was that she had threatened legal action against those who took part in the killing of her husband – who was also hanged earlier, along with other black men without a trial. Almost all victims of these extra-judicial killings were black, some were killed for helping black people, and the true figure is likely much higher than this, and black people are still being killed.

This time last year, America was the scene of demonstrations and counter demonstrations, riots and looting after George Floyd was killed by police in the city of Minneapolis. George Floyd was black and he was killed by violent racist days before the 99th anniversary of the Tulsa massacre, which was starting to become widely known for the first time. Residents of Tulsa painted the words “Black Lives Matter” on the road where the massacre took place, and across America throughout the summer tensions simmered and people talked of a new civil war. Months later, the city mayor arranged a secret night time operation to resurface the road as a pretext for removing the memorial to those who lost their lives past and present. Systemic racism is a daily fact of life for black Americans who are poorer, less well educated and die younger than white Americans. In a recent poll, 48% of black people expressed very little or no confidence that police officers in their community would treat black and white people equally.