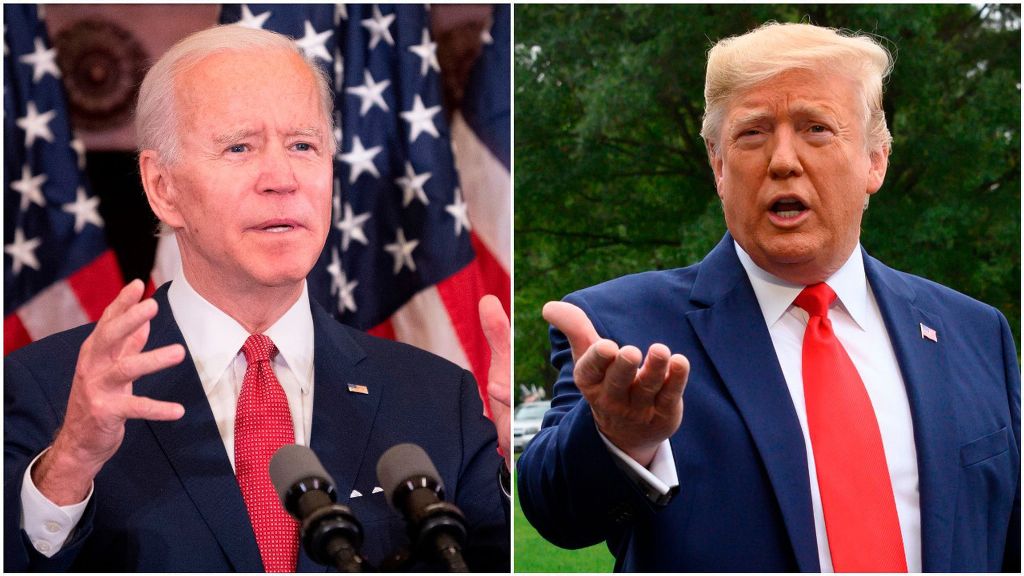 “Agonizing Wait Ends as Biden Wins in Deeply Divided US

After a much closer contest than pollsters anticipated, a prolonged count and allegations by Trump and the Republican Party; Democrat Joe Biden has led in the electoral college votes needed to become president elect.

However as the votes were counted it was surreal to see the nation divided between an unlikely pair of elderly white men. Both with indefensible reputations, neither lauded for their judgement or political acumen, and both equally far from being trailblazers of progress and advancement – yet apparently they’re the best the world’s leading nation has to offer.

However the US’s political spectrum is barely that. Whether voters call themselves liberal or conservative, the reality of the Capitalist ideology is that it permeates every strand of political thought by framing each debate with secular and liberal values of near unlimited personal and financial freedom.

With Joe as president of the US, Muslims around the world might feel that Muslims in the US will get freedom to work and practice Islam and US foreign policy will no longer be anti-Islam. Muslims might be deluded by some of the following statements of the President-elect.

“President-elect has pledged to immediately halt travel restrictions imposed by the Trump administration on more than a dozen nations.”

“Posts on social media make the claim that U.S. presidential candidate Joe Biden wants “Islam to be taught in our schools”, suggesting this would be at the expense of teaching Christianity. This claim is misleading and misrepresents Biden’s remarks.

In a brief glance at the legacies of subsequent presidents both democrat and republican, Bill Clinton’s administration was infamous for pursuing the so called Arab ‘Israeli’ peace process. Clinton served his purpose by negotiating the Oslo Accords between Yitzhak Rabin and Yasser Arafat in 1993 as part of the ongoing Zionist-American project, which serves to strip the Muslim Ummah of its legal and divine right to the blessed land of Palestine.

Clinton’s involvement in Iraq after George Bush Senior’s interventions in Kuwait, prompted him to send cruise missiles into Iraqi installations and impose sanctions on the civilian population. His meddling in Somalia and Sudan served the US’s geopolitical objectives in the region; and his utter failure to respond to the genocide in Rwanda cost over 800,000 lives. His role in lifting the arms embargo in Bosnia left the Muslims unarmed, resulting in the massacre at Srebrenica, which is perhaps most telling about the Democrats’ motivations.

Following Clinton, George W Bush Jr infamously instigated the invasions of Iraq and Afghanistan after 9/11. He defined the global war on terror (WoT) which the state media quickly weaponised by introducing the term ‘Islamist’, as propaganda that describes Muslims who resist Western imperialism and foreign policy.

The Bush administration wars saw at least 5 million people displaced in Iraq, with millions widowed and orphaned. One in every two people suffered life altering or ending impacts, with estimates of over 1.2 million deaths. The savage and humiliating treatment of Iraq’s occupation by allied forces subjected Iraqi civilians to all manners of humiliation in military prisons aerial bombardment with cluster bombs and white phosphorus, the shocking effects of which are still manifesting today.

Likewise in Afghanistan, US forces killed tens of thousands in an effort to hunt Al Qaeda and punish the real Taliban for daring to conceptualise an Islamic emirate. The cowardly US military committed atrocities the likes of which were never seen or heard of before unjustly imprisoning men, women and children, sexually abusing and exploiting pure innocent souls and supposedly bringing democracy to the oppressed Afghan.

As the War on Terror continued into the Barak Obama’s presidency, his Muslim sounding name and eloquence mesmerised the world and many Muslims fell for his left wing Democrat charms. Readily giving their unstinting support to this wolf in sheep’s clothing, the world watched as he acted to derail the Arab Spring revolutions and advocated for the tyrannical Syrian regime. Obama killed more Muslims than his predecessors through drone attacks in Yemen and Libya, whilst further desecrating Iraq and Syria under the guise of fighting rebels on many fronts.

This said, under these three presidents alone we have witnessed an escalation in US hegemony through its policies of globalisation, intervention, trade and export tariffs and the ubiquitous Palestinian peace process. Spreading democracy via the barrel of a gun, whilst blocking the right to self-governance, further devastating Muslim nations through vetoes, black ops, proxy wars and by supporting and creating militias to obstruct the avenues of Muslim unity.

Through the 1980s, Biden supported immigration laws and voted for many bills in favor of immigrants, but after the mid-1990s, he repeatedly helped pass legislation that weakened immigrants’ rights, both documented and undocumented, while giving increased power and resources to authorities for finding and deporting undocumented people. As vice president to then-president Barack Obama from 2008 to 2016, Biden championed policies that funded border militarization and deportation to respond to a growing migration crisis, and allowed Obama to actively engage in drone warfare throughout the Middle East, killing civilians and American citizens.

It’s clear that regardless of the face, democrats and republicans have the same geopolitical agendas, so we cannot naively assert that there is a better of two very obvious evils.

The only way to break out of this cycle is by an ideological tectonic shift something that will provide the world with real security and peace, that will regulate their instincts and organic needs in the correct manner; an ideology that can overcome the current capitalist system by bringing a totally different political and economic system which provides security, peace and justice to all its citizens. Therefore, Islam is the only ideology that can achieve this. Communism is in the dustbin of history and capitalism is people’s only hope even though it’s a dying hope. Due to many people in the world becoming pragmatic towards change, never can they escape this system, unless something superior comes to replace it. Furthermore, Islam also defies the concept of military balance logic due to the power of the ideology, it pushed out the Roman and the Persian powers even though Medina’s geographic location wasn’t in its favour. Verily! Islam will come again and liberate the world the way it did for 1400 years and is waiting to be written as the next superpower in the history books. It’s very close.

“It is He who has sent His Messenger with guidance and the religion of Truth, so that He may make it prevail [ideologically] over every other religion, however much the polytheists may hate this” [9:33].