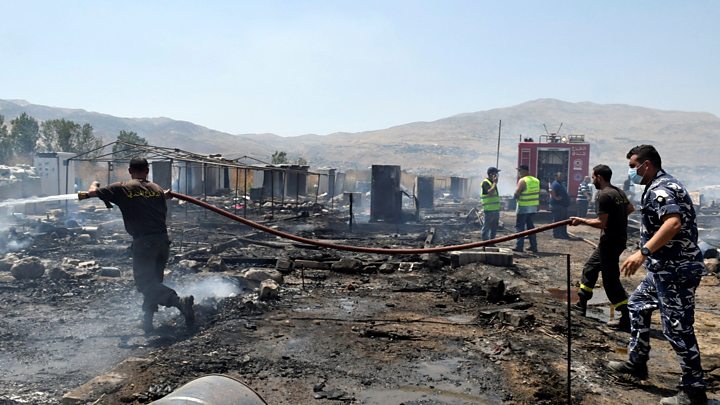 They fled from death, fear, hunger, cold and injustice carried out by the Syrian regime and its allies against the Muslim men and women in Ash-Sham, to find themselves caught in the most severe and cruel injustice, the injustice of humiliation and abandonment of a country they described – in recent past – as a sister state, but then it is inflicting hardship on them what no enemy is doing!! Burning of camps, arresting the frightened, starving of children and humiliating elders and women!! Is this how the guest is honored?! Is this how the grieved is relieved?!

Every now and then, a head of strife in Lebanon comes out to us, with his orange sectarian and confessional discourse, to pour out his grudge against our people and our brothers and sisters from Syria, even on the people of Palestine who are in Lebanon before the birth of this racist, his likes and his current!

As if it is not enough for the people of Syria, and before them the people of Palestine, what afflicted them and continues to inflict them of the spite of the regimes and their allies against the Muslims, especially the spiteful Assad regime who exercised his hatred not only on the people of Syria, but on the people of Palestine and Lebanon, and what was in Tel Zaatar camp, then in Nahr al-Bared, and then in Yarmouk, and the role played by the Assad’s security establishment in Lebanon, is no secret to anyone!! Then is it astonishing that these sectarian confessional spiteful haters are close allies of this criminal regime?!

We have thought at first glance, that this spiteful speech is directed to our people from Syria and Palestine, under flimsy economic pretexts – which everyone knows their decadence, lies and misleading, and everyone knows, in figures, the positive impact of the people of Syria and Palestine have on the economy in Lebanon – but then we see that it is more than that, a systematic speech against a category of Muslims in particular, under this authority and this “strong” era! And the events of the Municipality of Al-Hadath are not far away, preventing Muslims, yes Muslims specifically, without reserve or hesitation, and with the support of the Authority and its agencies, preventing them from owning and renting, and even opening a shop for work!! To achieve this, the sectarians and partisans use state institutions, from the municipalities, its police and its branches, to implement this malicious agenda. The mayor of the municipality comes out unhesitatingly loudmouthed on a radio station, which was published by El Nashra website and television on 21/6/2019 saying that: “We are proud of the decision we took about not selling or renting to the Muslims and we took it 10 years ago and we will walk in it”. He arrogantly added, “I am covered by everyone, first of all by President Michel Aoun from a long time ago, and the Shiites are not only satisfied with the decision, but they support me. The Secretary General of Hezbollah, Mr. Hassan, Nasrallah, at the request of President Aoun, returned to us the Warar Hill, and Parliament Speaker Nabih Berri, shakes on our hands”!!! And then banners on behalf of the Phalange Party (Kataeb party) in Ashrafieh were hanged, which were dripping poison and malice (the Mongols, Ottomans, Syrians and others came and left… and Lebanon remained), and they did not mention the British, French and Jews!!

Thus is, the so-called axis of “resistance and opposition”, in all its colors, and with them every spiteful, and behind them and with them is the evil Assad regime; practicing confessional sectarianism against a certain category of Muslims from Syria, Palestine and Lebanon in a country supposedly having overcome the ordeal of civil war which was built on such discourses, and on the likes of these politicians!!…

How long will this racist confessional sectarian chaos persist? Who is responsible for curbing these provocative speeches?!

We are here to remind you of the day when you lived in the midst of Islam and Muslims, where the Levant coast with its mountains and plains was part of the abode of Islam for hundreds of years, during which the Islamic State provided full care to all those who lived in its midst, Muslims and non-Muslims, and the justice of the rule of the Muslims, was witnessed by the equitable from the enemies themselves. History has witnesses that the Christians from the people of the country fought alongside the Muslims in the face of the invaders who corrupted the lives and security of their people… This entire brilliant history was only ruined by the intervention of some European countries at the time, to destroy the entity of the Khilafah (Caliphate) State, and revive the tribal, nationalist and sectarian rivalries and fanaticism, to form the Lebanese entity in this abhorrent form, which generated speeches that led to the civil war. And today we are back to hearing the same dissonance tone!

We in Hizb ut Tahrir/ Wilayah Lebanon warn and raise our voices; for things reached beyond its limits, and patience is running out for such rhetoric, these behaviors, and this blind hatred. Do not think that the Muslims in Lebanon are up for grabs, even if the ones claiming and alleging their fatherhood are weak submissive reckless followers, for we are from an Ummah that gives birth to leaders, does not accept humiliation and disgrace, and remains silent but only for a while. Take lesson from the country around you of the sweeping power of Muslims and know that the Muslims stand by one another in blood and seek to help their weak ones. And the people of Ash-Sham are our people, their blood is our blood, their destruction is our destruction and their victory is our victory.

As we have had one history with them, we will have a bright future with them, by Allah’s permission, in which we do not see the confessional sectarian grim faces, and we do not hear about hateful and abhorrent racism… under the Khilafah Rashidah (righteous Caliphate) on the method of the Prophethood, that takes care of the affairs of the people – Muslims and non-Muslims – with justice لَقَدْ أَرْسَلْنَا رُسُلَنَا بِالْبَيِّنَاتِ وَأَنزَلْنَا مَعَهُمُ الْكِتَابَ وَالْمِيزَانَ لِيَقُومَ النَّاسُ بِالْقِسْطِ “We have already sent Our messengers with clear evidences and sent down with them the Scripture and the balance that the people may maintain [their affairs] in justice.” ]Al-Hadid: 25[.

Therefore, we call on the Lebanese authority to be vigilant and cautious, to foil the confessional sectarian racism, which ignites discord, conflict and war.