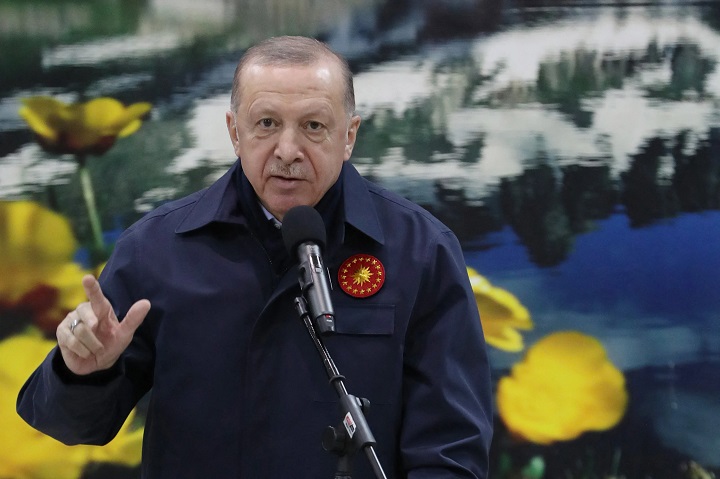 President Erdogan spoke by phone with President Herzog of ‘Israel’. Erdogan said they discussed the bilateral relations and regional issues, particularly the incidents some ‘Israeli’ radical groups and security forces have recently caused in Palestine. Erdogan said: “I would like to stress once again the necessity of not allowing provocations and threats against al-Aqsa Mosque’s status and spirituality during this sensitive period. I reiterate my call for all to take the utmost care to protect the spirituality of this sacred site and of these sacred days. As Turkey, we will continue to work for the establishment of peace and serenity under all circumstances.” (Agencies 20.04.2022)

Comment:
The importance of the month Ramadan for Muslims is far beyond just a month in which the obligation of fasting is fulfilled and Eid is held at the end. The conquests and victories that constitute the turning points of Islamic History are nearly the symbols of Ramadan. Muslims both have approached their Lord with their fasting and obedience and experienced the peace of submission to the bone during this month. On the other hand, they felt joyful about the Eid, by going from one expedition to another on behalf of raising Islam’s honor and dignity with conquests and victories.

However, the situation of the Ummah today, whose history was written as such, is really heartbreaking. For sure, the rulers who govern the Muslims and those dirty-minded who rationalize their dirty relations have the lion’s share in the emergence of this unfavorable picture. The fact that our leaders who recognize the Jewish entity who as a usurper entity terrorizes in Muslim lands since 1948 until today, and have political, commercial and military relations with it, talk about peace and quiescence for Masjid Al-Aqsa, is verily riotous. The Ummah expects you to mobilize the armies that will extirpate the Jewish entity that has slaughtered thousands of Muslims, invaded our lands, polluted our first qiblah with its boots. But you, talk about the tales of peace and tranquility to those who groan under occupation and oppression, who trample which is holy for us.

It is worth remembering president Erdogan in particular. As long as you continue to have political and commercial relations with the Jewish entity that makes a practice of bloodying up every Ramadan, the occupations and destructions of this terrorist entity will increase. In this blessed month when an expedition must be launched against them, they make Muslims spit blood before your eyes. Just a month and a half ago, Herzog, the murderer you welcomed with spectacular ceremonies in Turkey on behalf of the realpolitik idol, is the chief perpetrator of these massacres and atrocities. It’s not about a matter caused by some extremist groups and security forces, as President Erdogan stated by reversing the facts. This is a matter of Herzog, who you greeted with ceremonies, and all of them, including the rulers, rabbis, military, police, people, to remain as invaders in the holy land. That’s the right explanation. But you don’t want to see it, despite the evident text. Thus, this verse of our Lord makes this clear.

“O believers! Take neither Jews nor Christians as guardians—they are guardians of each other. Whoever does so will be counted as one of them. Surely Allah does not guide the wrongdoing people.’ [Al-Ma’idah 51].

While especially the situation of the Jews is steadfast with an ayah regarding hostility against Muslims, cooperating with them is not political but a real derogation. The history gives the rulers and armies of Muslims a great opportunity. They have the honor of eliminating the occupying Jewish entity from the holy land at their fingertips. But unfortunately, the rulers’ agendas, works, visions, troubles, goals and those they want to persuade, are completely different. While there is an opportunity to make history in an honorable manner like Salah ad-Din and Abdul Hamid, they try to make history as coward, politic and self-seeking figures who cooperate with the Jewish entity. Just like the rulers who have been in charge of Muslims since 1948.We believe and have faith in Allah that this dark period will be lightened up by the sun of Islam. This problem will be resolved forever by Rashid caliphs, upright rulers who will clean the Jewish entity from the holy land, and its blessed army.