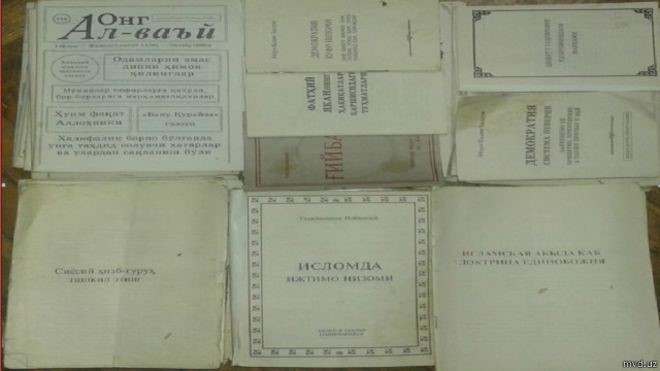 Under the pretense of fighting against terrorism the authorities of Uzbekistan and Russia prosecute Muslims who convey Islamic ideas, – said the representative of Hizb ut Tahrir in his comment on the arrest of 16 people by the bodies of internal affairs of the Republic of Uzbekistan.

According to the ministry, 16 adherents of the Hizb ut Tahrir party were detained in Tashkent and the Tashkent region; also, a large number of extremist literature was seized.

In an interview to BBC the representative of the Central Media Office of Hizb ut Tahrir Eldar Khamzin said that these arrests are a continuation of the sequence of persecutions of Muslims.

Eldar Khamzin: “The Uzbek regime continues its policy of hostility to Islam and Muslims. They pursue active Muslims and along with them they pursue our men too. All these arrests are connected with the latest events in Syria. As you know, the presidents of Central Asian countries and Russia met in Kazakhstan recently, and they broached a subject of the war with terrorism. During the meeting, the presidents of these countries discussed the topic of the fight against terrorism. The latest arrests in Tashkent and Moscow are nearly concerned in the meeting of the presidents in Kazakhstan. There were raids in Moscow; 100 people were detained, 22 of them were arrested and others were released. All of them are members of Hizb ut Tahrir. As you know, Russia continues air strikes in Syria and President Putin said that those who originate from Central Asia and Russia fight in Syria that we will fight against them. Therefore, to justify their unjust policy politicians exaggerate the threat of terrorism, staging a show to common people. But in reality this threat does not exist. Members of Hizb ut Tahrir are not concerned with acts of terrorism. Members of Hizb ut Tahrir carry out an ideological struggle. Our members just want to inform common Muslims of today’s actual situation in Uzbekistan and Russia. As for the authorities, they do not want this reality to come to the notice of the people, and therefore they arrest members of our party.

BBC: Against the backdrop of a long struggle against the religious movements in Uzbekistan, how many members of Hizb ut Tahrir are left there?

Eldar Khamzin: If you are acquainted with our method, Hizb ut Tahrir is an ideological and political party. We do not depend on individuals; Islamic concepts unites all of us. And today only these very ideas remain in Uzbekistan and our members are working on the spread of these ideas. Naming us terrorists and extremists, the authorities only intimidate people because our members have never been arrested for terrorism in any country of the world. Our members have never been involved in explosions, killings or threats. The members of our party are engaged in the study of Islam and the spreading of its ideas. Our books are a proof of this. The authorities do not want these books to reach the people, and therefore they have banned them. These books have the answers to all the basic issues of mankind, for example, the problems of the Uzbek people. These books have correct and clear solutions to all these problems. The authorities do not want the people to become aware of it. They arrest our members, and declare them terrorists. If people read these books, they will find the solution to their problems. These ideas will not be limited to the thousands of members who study and spread them. That is why however hard Putin and Karimov fight against our members– they cannot stop them, because our ideas are solutions to problems of humanity, based on the ideology of Islam.