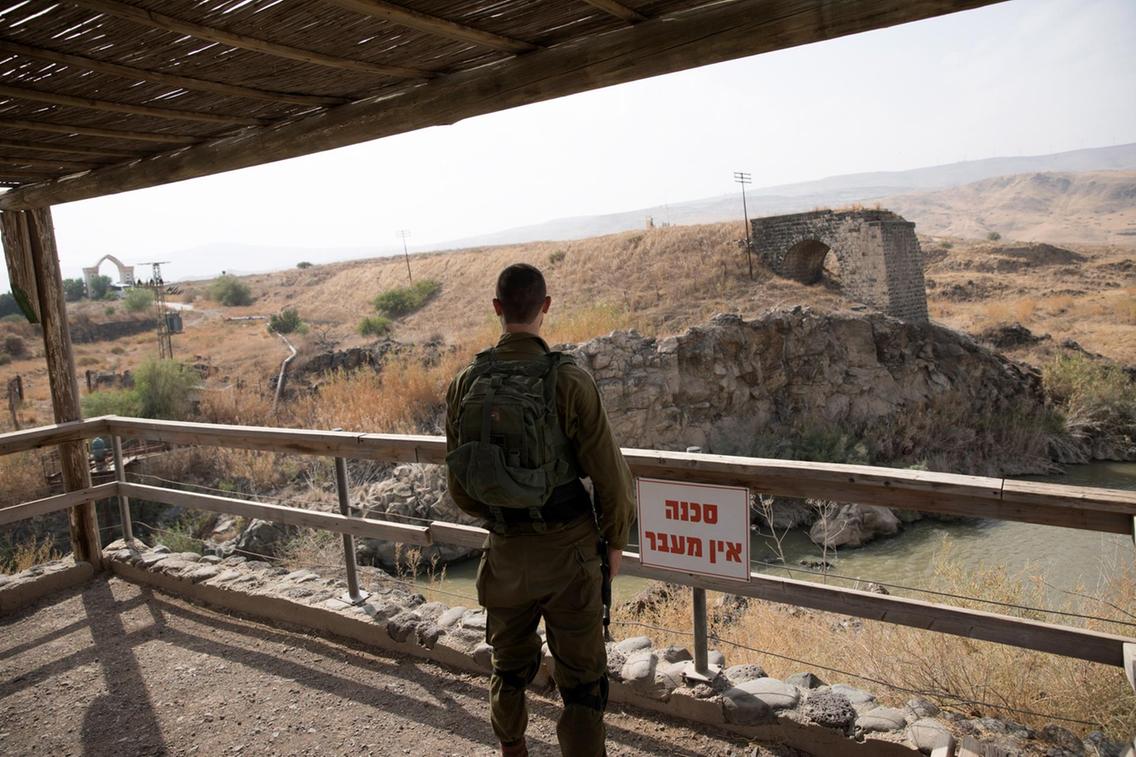 Had the Regime Been Serious about Resenting the Jewish entity, it Would Have Eliminated the Entire Wadi Araba Agreement

Jumana Ghanimat, Minister of State Information Affairs, said in a statement carried by Al-Jazeera Net on 25/10/2019 that the annexes of the peace agreement with “Israel” for Baqoura and Ghamr areas will expire on the 10th of next month, and there will be no extension or renewal, and continued saying that the receipt of the two areas will be immediately on the specified date without the need for any prior actions. In light of these statements, we show the following:

Since the regime in Jordan made its strategic choice, as it claims, by making conciliation and peace with the Jewish entity – the occupying enemy of the Muslim lands in Jordan and Palestine, and surrendering (these lands) under the humiliating Wadi Araba Treaty and its surrender clauses, neither the Jews nor their entity has ceased its aggression against the sons of the Ummah, killing, displacing and arresting them in occupied Palestine and even in Jordan through the Mossad and the Embassy of Jews that killed and assaulted Jordanian nationals, which was enough reason for any country with sovereignty and dignity to cut any agreement with them. In a recent statement from former Foreign Minister Kamel Abu Jaber: ” “Israel” has not implemented any of the provisions of the agreement either related to Jerusalem, water or borders, “Israel” entered (the agreement) with bad intentions, we entered in good faith!!!” (Kingdom TV)

Now, there are talks about the restoration of the Baqoura and Ghamr areas, which the Jews have been complicit in, according to the Wadi Araba treaty 25 years ago, after the government expressed its desire not to renew the annexes of these two areas, due to public pressure. There was an outbreak of comments and news from Jewish officials that there are Jewish attempts to renew but were rejected, and according to the Jordanian Foreign Ministry spokesman, Jewish voices have threatened to cut or reduce the share of water supplied by the Jewish entity to Jordan every year in accordance with the agreement, as the restoration of these lands is not as simple as the government spokeswoman imagined when she said:

“The receipt of the two areas will take place immediately on 10/11/2019, the date was specified without the need for any prior actions.” Former Prime Minister Dr. Abdel Salam Majali, who signed the agreement, explains: “This area – Baqoura – is under Jordanian sovereignty and has private land rights and “Israeli”-owned interests. They have the right to dispose of what they own. Jordan has pledged to grant unrestricted private freedom to land owners to enter, exit and use, which is an area of 850 donums.” He also said: “In this process we have respected private property, and 25 years later, i.e. now, negotiations are underway, and we can either own it or not, and its owners will still enter and leave it under Jordanian sovereignty.” (Kingdom TV)

As for the 4235 dunums of land occupied in 1967, the Jewish entity insisted on keeping it as an extension of the settlement of Tzufar and cultivates more than 1000 dunums of palm and vegetables. Its revenues amount to about six million dinars per year. There is nothing in the lands of Ghamr that can be invoked by private property and what had been contained in the annexes of the special system granting the right of the use of Jews, except to disregard the constants of the nation and the feelings of the people and their dignity and to strengthen the intimate relations with a Jewish entity.

The ambiguity of most of the provisions of the agreement and the regime’s strong desire to reach an agreement with the Jews led to degrading concessions as well as the formulation of provisions and supplements that would give Jews an opportunity, as the agreement states, to negotiate the abandonment of these lands after Jordan expressed its unwillingness to renew or extend. If this is hindered, the two parties seek arbitration and if that is refused, the “dispute” may evolve to resorting to international law. In the meantime, the situation in Baqoura and Ghamr remains the same as it is now, as is the habit of the Jews; treachery and denunciation of covenants. They cannot be trusted, and no one holds agreements with them except those who have betrayed the Ummah, its Deen and its dignity, Taba region remained in the international courts for 7 years for one border point that had its features obscured.

Entering the labyrinth of agreements with Jews, resorting to international law and resorting to the so-called international community to settle disputes, was a trick by the regime in Jordan to distance itself from the conflict and fighting the Jews, which are the demands of the people of Jordan to reclaim their lands, Jerusalem and all Palestine, citing its economic and military weakness. It considers its recognition of the Jewish entity as a victory to secure its borders, and it concluded the Wadi Araba agreement under the international umbrella so as to argue against the continued attacks by Jews that the limits of its confrontation are what is permitted by international law, which has become its reference, not what was brought forth in the Qur’an where Allah (swt) says:  وَاقْتُلُوهُمْ حَيْثُ ثَقِفْتُمُوهُمْ وَأَخْرِجُوهُم مِّنْ حَيْثُ أَخْرَجُوكُمْ “And slay them wherever you may come upon them, and drive them away from wherever they drove you away” [Al-Baqara: 191] Since the Wadi Araba agreement, the people of Jordan have only suffered poverty, indebtedness, unemployment, and the persistent aggression of Jews against Jerusalem, the people of Jordan and Palestine, as well as harnessing economic zones and opening borders to allow the Jewish entity to launch their economy at the expense of Jordan.

Oh People, Our People in Jordan:

The Jewish entity is an artificial and terrible entity that would not have lasted without the life-support from the Kafir colonialist Britain, America and their agents in the region, surrounded by countries that were fragmented from the state of the Khilafah (Caliphate) and made powerless to make them states  without any elements, to protect the Jewish entity and harness its military forces and economic potential for its durability and vitality with the humiliating agreements that are open to everyone, such as the conspiratorial treaties Oslo, Camp David and Wadi Araba, against the Ummah and her people, instead of mobilising the military capabilities of this country to recover its occupied territories, which is the practical and legitimate solution towards the Jewish entity and uprooting it from its roots.

The people of this Ummah have proven their hostility towards the Jewish entity, their non-recognition of its existence, nor the recognition of the agreements that have been signed with it. Their movements and their indignation can be heard even by the deaf, that they do not want to deal with this enemy, who does not care about any treaty or agreement, and the only solution for it is to initiate an actual state of war towards it, which will only be carried out by the state of the Khilafah Rashida that will be implemented soon, by the will of Allah, through the support that this Ummah will give to those working for it. The Khilafah will restore this Ummah’s unity, preserve its children and wealth and mobilize its armies to the shores of the Mediterranean to liberate the oil and gas wells from the Jewish entity and regain Jerusalem and all the cities of Palestine on its way, but until then, the Wadi Araba Agreement must be cancelled and depart from its subordination and cost on the Ummah by relying on the Jewish entity who is the biggest and perhaps the sole beneficiary of any agreement signed with it.