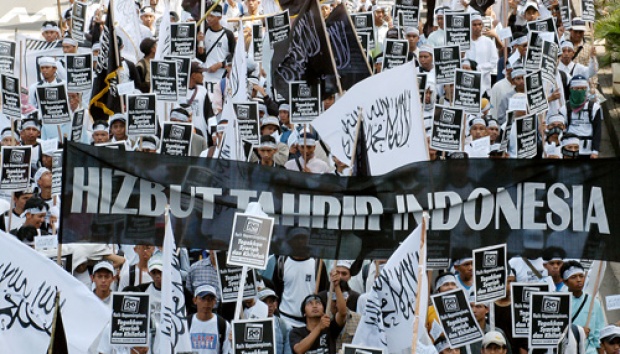 On the 19th of July 2017, the government of Indonesia officially revoked the legal status of Hizb ut Tahrir Indonesia (HTI) and declared HTI as an illegal organization. The ban was executed under a controversial presidential decree, known as PERPPU, that gives officials the authority to disband organisations deemed to threaten ‘national unity’ and the principles of ‘Pancasila’.  HTI had long been targeted by the government of Indonesia especially after the massive demonstration of Muslims rejecting Basuki “Ahok” Tjahaja Purnama, a Christian, as the governor of Jakarta last year. Under PERPPU, HTI is the first organization to be banned after President Jokowi approved the controversial legislation.

Even before the official ban, the Indonesian government had actually unofficially ‘forbidden’ HTI after statements were issued by officials concerning the position of the party. Soon after, PERPPU was endorsed and HTI became the first ever organization that was banned in Indonesia without due process of law. Since the ban, there has been massive debate on the issue and HTI has already taken steps to bring this matter to law. Let the process undergo its due course, but it is indeed our responsibility to remind Mr. Jokowi of his actions so that he may take heed. Mr. Jokowi…

1) You have now turned into a dictator or, more accurately, you have shown your real face as a dictator. You have shown to all Muslims, not just Indonesians who you really are.

2) Indonesia is a land known to be the ‘Land of Law’. You have changed it to the ‘Land of Power’ and this is something that even your own people despises.

4) You have ruined Indonesia because all the things that Hizb ut Tahrir had done is for the good of Indonesia as a Muslim state. Be it Indonesia, Malaysia or any other Muslim lands, when the Sharia of Allah (swt) is implemented, then justice and stability will surface. This is what Hizb ut Tahrir is working towards – the implementation of Allah’s (swt) law on earth. But you decided to block and ban a party that does activities to uphold the Sharia of Allah!

5) Hizbut Tahrir is a party of Islam. It strives day and night to establish the Khilafah Rashideh ala minhaj an-nubuwwah and unite Muslims all over the world under one state and one flag. Rasulullah ﷺ and his companions worked for this. It is because of this effort that we, in the Malay Archipelago, have been blessed with Islam. But, you chose to prevent the duties. Have you no shame to Allah (swt), His Rasul ﷺ and the Mu’minin? You have lost your credibility as a Muslim and now you have the audacity to violate the commands of you Creator!!!

6) O Mr. President! Remember that however much you try to block the da’wah of Hizbut Tahrir, it will not delay the implementation of Sharia and Khilafah – not one bit! Take heed that your power will be gone soon and the return of the Khilafah is nigh. Shame on what you did. It will serve you nothing but vain in this world and punishment awaits you in the hereafter. Take this as a reminder before you are called upon your Creator!

7) Remember O Mr. Jokowi! How many dictators and regimes in this world, which were far more unjust and stronger than you are, have been disgraced and overwhelmed by the wrath of Allah (swt). If you take heed of this reminder, then seek forgiveness from Allah (swt), so that He may show you to the right path and help you in your governance with guidance and compassion. If you continue with this injustice, then to Allah (swt) we leave your affairs.

To our brothers in Indonesia, we wish that you display patience and Allah (swt) shall increase your strength in this noble struggle. We pray that He strengthens our determination and our efforts in working towards the implementation of Sharia and the establishment of the Khilafah (Caliphate). لا حول و لا قوة الا بالله La Hawla Wala Quwata Illa Billah