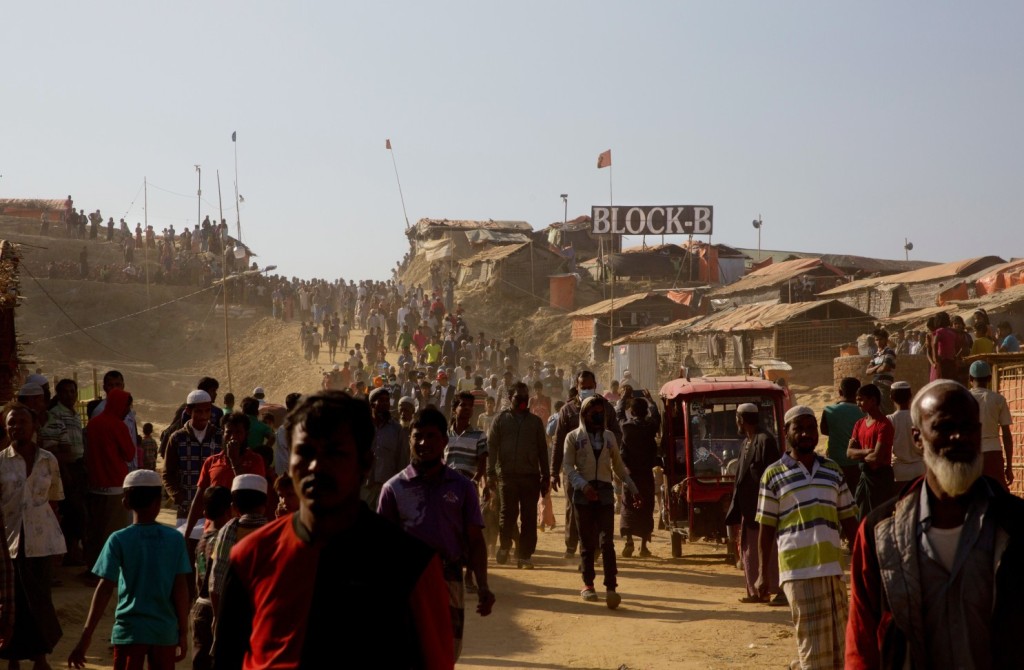 On the 1st October, Human Rights Watch (HRW) released a statement regarding the abuse suffered by Rohingya refugees being held in Bhashan Char, a remote island off Bangladesh’s southwestern coast. The refugees reported that they were beaten severely by Bangladeshi naval officers after they went on a 4-day hunger strike last month in protest of the deplorable conditions they have been subjected to while in detention on the island, and to plead their re-unification with their families in Cox’s Bazaar refugee camp in the mainland. According to HRW, the Rohingya Muslims were beaten with sticks and tree branches, and even women and children were not spared from this horrific abuse. Refugees detained on the muddy, silt, cyclone-prone island are subjected to insufficient food and clean water; inadequate medical facilities; no access to education, humanitarian assistance and other basic services; and restrictions on their freedom of movement. Many are forced to sleep on concrete floors with no cover, while others have developed skin conditions due to the poor quality of the water. HRW has also previously documented alleged torture and abuse of Rohingya refugees on the island by Bangladesh authorities. In addition, an Amnesty International report published last month alleged sexual assault of Rohingya women by security personnel on the islet.

Bhashan Char Island has rightly been described by many human rights organisations as a ‘prison’ and as inhabitable due to being prone to severe damage from monsoon each year. Despite this, this May, the heartless Hasina regime transported more than 300 Rohingya from the squalid, disease-ridden refugee camps in Cox’s Bazaar to Bhashan Char. This included around 180 women and 30 children. The regime even ignored warnings in May that the island was in the path of an approaching “super cyclone”, and that confining the refugees there would place them in grave danger. The scale of the unbearable living conditions on the island can be appreciated from the fact that these poor helpless refugees would rather return to the grossly overcrowded, wretched camps in the mainland which have been condemned as not fit for animals and as death traps, rather than remain in Bhashan Char. In late September, news emerged that the Bangladesh regime formed a committee, headed by the principal secretary to the Prime Minister, to begin the relocation of 100,000 Rohingya refugees from the Cox’s Bazaar camps to the island.

The conscienceless Hasina regime has shown that it is no different to the criminal Myanmar regime in its contempt for the Rohingya Muslims. This is not surprising for the systems of both states are born from the same toxic corrosive concept of nationalism which dehumanises those from other ethnicities, races or nationalities. Indeed, it is a concept that robs states, governments and politicians who embrace it of all humanity, including the Muslim regimes. Rather than treating the Rohingya as Muslim brothers and sisters, and providing them with proper sanctuary as Islam obliges, these regimes, intoxicated with nationalism, view them as illegal foreigners in their land and subject them to another chapter of persecution and suffering.

This is why the Prophet ﷺ said, referring to nationalism, racism and patriotism, «دَعُوهَا فَإِنَّهَا مُنْتِنَةٌ» “Leave it, it is rotten.” He ﷺ also said, «لَيْسَ مِنَّا مَنْ دَعَا إِلَى عَصَبِيَّةٍ، وَلَيْسَ مِنَّا مَنْ قَاتَلَ عَلَى عَصَبِيَّةٍ، وَلَيْسَ مِنَّا مَنْ مَاتَ عَلَى عَصَبِيَّةٍ» “He is not one of us who calls of ‘asabiyyah (Nationalism) or who fights for ‘asabiyyah or who dies for ‘asabiyyah.” And he ﷺ said,‏ «لَيَنْتَهِيَنَّ أَقْوَامٌ يَفْتَخِرُونَ بِآبَائِهِمُ الَّذِينَ مَاتُوا، إِنَّمَا هُمْ فَحْمُ جَهَنَّمَ، أَوْ لَيَكُونَنَّ أَهْوَنَ عَلَى اللَّهِ مِنَ الْجُعَلِ الَّذِي يُدَهْدِهُ الْخِرَاءَ بِأَنْفِهِ، إِنَّ اللَّهَ قَدْ أَذْهَبَ عَنْكُمْ عُبِّيَّةَ الْجَاهِلِيَّةِ، إِنَّمَا هُوَ مُؤْمِنٌ تَقِيٌّ وَفَاجِرٌ شَقِيٌّ، النَّاسُ كُلُّهُمْ بَنُو آدَمَ وَآدَمُ خُلِقَ مِنْ تُرَابٍ»‏ “Undoubtedly Allah has removed from you the pride of arrogance of the age of Jahiliyah (ignorance) and the glorification of ancestors. Now people are of two kinds: Either Believers who are aware or transgressors who do wrong. You are all the children of Adam and Adam was made of clay. People should give up their pride in nations because that is a coal from the coals of Hellfire. If they do not give this up Allah will consider them lower than the lowly worm which pushes itself through Khara (dung)”.

Indeed, these regimes, which are corrupt and heartless to the core, hold a contempt towards the Words of Allah (swt), إِنَّ هَذِهِ أُمَّتُكُمْ أُمَّةً وَاحِدَةً وَأَنَا رَبُّكُمْ فَاعْبُدُونِ “Verily, this Ummah of yours is a single Ummah, and I am your Lord and Cherisher: therefore serve Me (and no other).” [Al-Anbiya: 92]

Nationalism is the western-inspired concept which destroyed the unity of the Muslim Ummah for it made the bond between Muslims be based on the superficialities of national and ethnic ties, rather than the Deen of Islam as obliged by Allah (swt). Consequently, this corrupt and divisive idea caused the division of the Muslim lands which were once united under the Islamic rule of the Khilafah, into different and weak nation states, aiding the destruction of the Khilafah which had stood as the shield and guardian of the Believers – regardless of their race, ethnicity or land of origin. Nationalism is a concept which has brought no goodness for this Ummah in whatever shape or form; rather it has kept the Muslims divided, instigated wars between them, and resulted in persecuted Believers being abandoned to their oppressors and refused dignified sanctuary in the Muslim lands, as is exemplified with the plight of the Rohingya Muslims. While we as Muslims continue to hold on to this caustic destructive concept, and while we continue to maintain the nation state identity in our Muslim lands, we will never prosper or progress, and our oppressed Muslim brothers and sisters will remain abandoned victims of persecution, and deprived of protection, care and sanctuary.

Truly, there will be no respite, nor end to the desperate plight of our Ummah until we reject nationalism and these colonial-imposed national borders between our lands and unite once again under one system, one state and one leader under the Islamic rule of the Khilafah (Caliphate) based upon the method of the Prophethood, which will protect and rescue the oppressed Believers, settle them in its lands, and afford them the dignity, rights and welfare that Allah (swt) commands they enjoy.