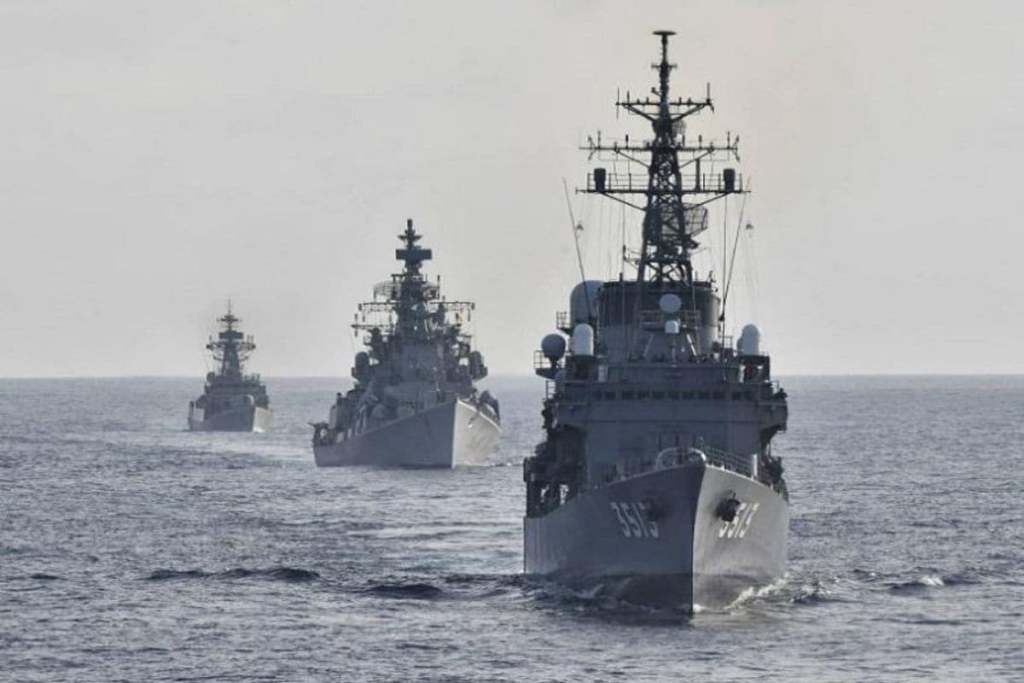 Bangladesh and India started a three-day naval exercise in the northern Bay of Bengal on Saturday, according to diplomatic and defense sources. Bangladesh defense officials described the engagement as a coordinated maritime patrol along the international maritime boundary line by warships of the two counties. It is the second edition of naval exercise in the northern Bay of Bengal. The first of its kind was held in 2019. ‘The aim of the exercise is to develop interoperability and joint operational skills through conducting a wide spectrum of maritime exercises and operations,’ Indian Navy spokesperson commander Vivek Madhwal said. (New Age, October 3, 2020)

Bangladesh naval force’s participation in a joint exercise with the Mushrik enemy State India is an act of backboneless leadership particularly when India is unsettled due to the recent tussle with China for the supremacy in the region. The way several small south Asian countries like Nepal are dealing with India proves how weak this country really is. But the puppet regime of Bangladesh is shamelessly facilitating the US agenda (Act East Policy) to establish India as a regional power to tackle China. USA in particular is worried about the recent China-India skirmishes as it may affect its long-term strategic imperatives in that region. The concern was expressed by the U.S. Secretary of State Mike Pompeo as “incredibly aggressive” actions by China (foreignpolicy.com, July 9, 2020). So now, we see Bangladesh’s participation with India in joint exercises in Bay of Bengal just a couple of months after the Indian Navy took part in military exercises with a US Navy battle group near the Andaman and Nicobar Islands in the Bay of Bengal aimed to deter China’s expansionist plan. The spineless Hasina regime is not even clever enough to take the advantages of this situation as it lacks vision, and rather prefers the slavery to Western colonialists as a means to be in power. Such US backed joint exercises are simply some heinous tool to keep the courageous and potential Muslim armed forces subjugated under the leadership of the Kafir-Mushriks militaries to attain their goals. Moreover, it is forbidden for Muslims armed forces to attend such kind of joint exercise as Allah (swt) says in the Quran al Karim: يَا أَيُّهَا الَّذِينَ آمَنُوا لَا تَتَّخِذُوا عَدُوِّي وَعَدُوَّكُمْ أَوْلِيَاءَ تُلْقُونَ إِلَيْهِمْ بِالْمَوَدَّةِ وَقَدْ كَفَرُوا بِمَا جَاءَكُمْ مِنَ الْحَقِّ “O you who have believed, do not take to yourselves My enemy and your enemy for patrons, casting forth to them (your) amity, and they have already disbelieved in what has come to you of the Truth” [Surah Al-Mumtahanah:1]. Instead of turning our military into a tool of Kafir-Mushriks, the upcoming Khilafah (Caliphate) will give the real vision and purpose for our Muslim military forces. The Khilafah’s military will be instantly mobilized to free the oppressed Muslims and non-Muslims in India, which was conquered by our ancestors by Jihad and are now illegally occupied by the Mushriks.